Mario Tennis first appeared on the Nintendo 64, and while it doesn’t frequent consoles as much as its other Mario titles do, it’s still one of my favorite series. Its latest installment, Mario Tennis Open, is heading for the Nintendo 3DS next month, and it actually may be better than its predecessors. 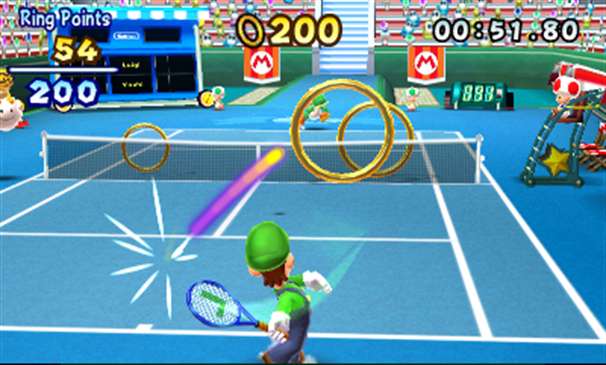 Like with past Mario Tennis games, Tournament mode lets you play through various brackets, both singles and doubles, while Exhibition mode lets you play free matches against computers, local wireless buddies, or strangers over wi-fi. That’s right. Open will take advantage of the wi-fi capabilities of the 3DS that made Mario Kart 7 so successful without the fuss of Friend Codes. Your selection of characters still remains strong as past favorites like Mario, Daisy, fand Yoshi return. Each character is divided into categories such as power, technique, speed, tricky, and defense, giving each one different strengths and weaknesses on the courts. Fans of the series can rest assured; Boo is still as tricky as ever.

Once you’re on the courts, you’ll notice the way you play the game has been simplified, or perhaps, redefined from Mario Power Tennis. In fact, it feels a bit more like the original N64 version as your gimmicky power shots are no more. Instead, the area where the ball will land will light up in different colors corresponding to your touchscreen. The colors simply refer to the different types of shots you can do by either pressing the required buttons or tapping the screen. You can also change the complexity of the touchscreen’s layout or simply disregard it. Tapping the move lets you do them quickly, but using the buttons lets you charge them up. 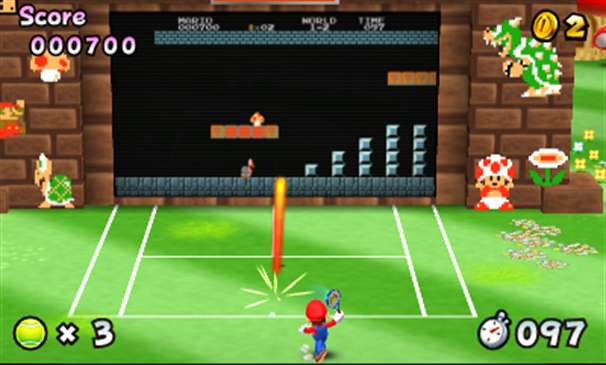 Aside from the main competitive modes, Open includes mini-games too. Ring Shot requires you to lob, slice, or perform a topspin hit to capture rings on the field. Ink Showdown has you hitting globs of ink before they stain your screen making it harder to see. The next one, Galaxy Rally, requires you to collect star bits on the other side of the net. Sounds easy, but as soon as the ball hits the other side, parts of the floor disappear. You could also say these mini-games act also like a practice mode for the main game as they will train the basic skills you’ll need to win tournament cups.

The last mini-game also trains your skills, but it combines the retro goodness of the original Super Mario Bros. game with simple racquet ball mechanics. Your wall is actually a side-scrolling screen of the first level in the original NES game. Using your different shots, your goal is to hit as many things on the screen as possible to increase your score. It’s actually harder than it looks! 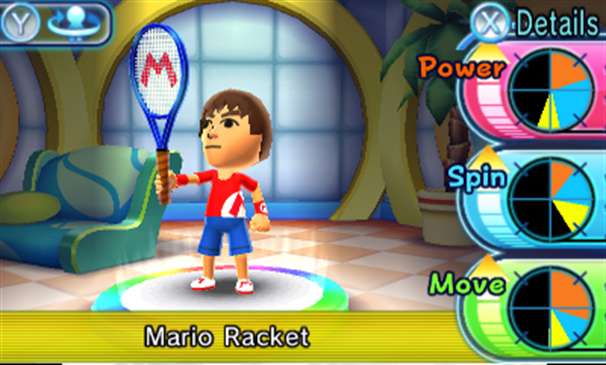 Finally, the game’s Clubhouse mode lets you customize your Mii characters by giving them different items to equip that change their attributes. Items can be purchased with the coins you get from playing matches with computer or friends. Open also includes Street Pass integration that features your Miis, but details on how it’s implemented or what it entails wasn’t available to disclose.

Open’s default camera shows you a top-down view of the court, but if tilt your 3DS up in front of you, you’ll enter Dynamic View mode where the camera is right behind your character. This is optional, of course, but touches like these let it be more than just another Mario Tennis game, touches like gyroscopic controls, wi-fi, and Mii customization.

Get ready to serve in 3D when Mario Tennis Open releases on May 20.