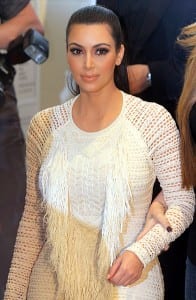 Rumors connecting Kim Kardashian and Kanye West romantically have spread through the entertainment world, spurred on by anonymous sources and appearances the duo have made together.

“Kim and Kanye have now just started dating,” said a source to PEOPLE. “They’re seeing where it goes.”

When asked about her supposedly budding relationship with Kanye during an appearance on the Today Show, Kardashian spared few details, saying “Kanye and I have been friends for years… You never know what the future holds.”

Kanye’s feelings on the matter have been displayed more prominently, through his song “Theraflu”, where he sings “I admit I feel in love with Kim… Round the same time she fell in love with him.”

The two have been seen in various spots around New York City, eating out together, and going to the movies.

Kardashian, despite these rumors, remains legally married to Kris Humphries. Of their pending divorce, she said “We are still going through a divorce, so there’s not really much that I’m allowed to talk about. Out of respect for [Humphries], I try not to talk about stuff involving him and regarding that situation.”