One of my favorite handheld titles of PAX East 2012 was Theatrhythm Final Fantasy, Square Enix’s first rhythm game that actually incorporates the traditional RPG elements you’d expect from a Final Fantasy title. This year marks the franchise’s 25th year anniversary, so what better way to celebrate it than to release a game that lets fans revisit their favorite titles, even if it’s just through their music.

The game I played was essentially a finished version, so I had access to all of its modes and settings. Series mode is the closest thing to a “story” the game has to offer and lets you play through every numerical Final Fantasy game from I through XIII. Your party starts out with four characters, ranging from the generic mage or warrior to more important protagonists like Squall or Lightning. Each Final Fantasy game has a set of familiar songs and three different stage styles – field, battle, and event. 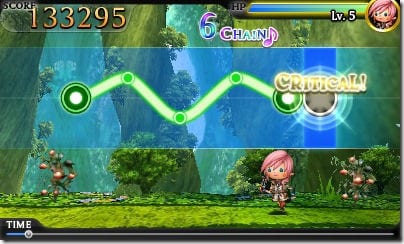 While each one is a little different in how they present the notes on the screen, every stage requires you to tap your screen in tune with the music. Field stages are side-scrolling and involve tapping notes, swiping them in different directions, and holding your stylus down to follow a trail. Battle stages directly involve your characters, whose success in battle depends on your accuracy and note-tapping combos. Get enough combos and your party can summon favorites like Shiva and Ifrit to decimate bosses. Finally, event stages play out like stages in Elite Beat Agents, where notes appear on-screen while a crucial cut-scene from the original game plays.

The game’s RPG elements come into play when you finish each stage. Your final score provides experience points for your characters that can level up, get stronger, and even learn new abilities. You’ll also get presents the higher you score that your characters can equip. These items, like gloves, armor, and other Final Fantasy classics, will not only raise their attacks, but they will also give you advantages when tapping notes on the screen. For example, some items make it easier to hit a note perfectly and let you adjust their timing – think Groove Coaster. 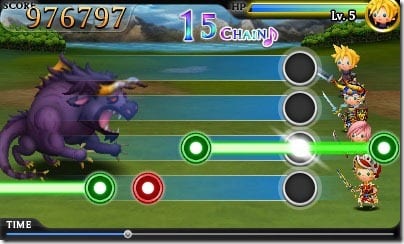 Series mode lets you play through a game’s three stages consecutively, but if you want to just pick any song, Challenge mode lets you do so. Successful scores in each song also unlock it at higher difficulties.

The last mode I tried was Chaos Shrine Mode, which was described to me by a Square Enix rep as the game’s most challenging mode. Not only does it include 99 levels of high difficulty music, but you can also play this mode with up to three other friends. Here is where you can also unlock rare items and even more powerful party members. Some songs are only available to play in this mode as well.

I had a blast playing Theatrhythm Final Fantasy. The game was easy to pick up and unlike other rhythm games, its robust RPG elements and unlockables make it a game I can’t wait to dive into once it comes out on July 3.