Behind a massive booth at PAX East lay a never before seen look at one of the most anticipated games of this year, Assassin’s Creed 3.  While the game was not playable, we were treated to a walkthrough video showing some of the new features in the game. 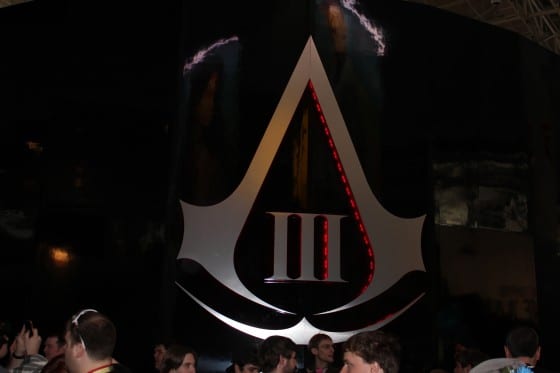 For those uninitiated in what Assassin’s Creed 3 is about, the game takes place during the Revolutionary War. You play as Connor, a half-British, half-Native American assassin who is in a lifelong hunt to bring down the Templar order.

The video is set during the battle of Bunker Hill in 1775. Connor starts out on the American side of the conflict, yet nobody seems to know who he is, leaving the idea of an actual allegiance up in the air. His target is Major Pitcarin, one of the soldiers leading the British side of the effort. The battle continues to rage as you work your way through solid cover in an attempt to break away from the main combat. Ubisoft is promising over 2,000 troops on the screen at once, making these battles as epic as they really were. While the battles are scripted story moments, there is still a sense of open world exploration, with several ways of accomplishing your mission.

As Connor worked his way through the battlements and line infantry a new cover system was in the works as well as a completely new set of animations for the main character. There are now brand new contextual animations in the vein of the Uncharted series, where Connor will react to environmental effects such as nearby explosions.

Eventually Connor worked his way to a nearby wooded area and showcased the new tree free-running in Assassin’c Creed 3. With a large part of Assassin’s Creed 3 taking place in the vast wild woods of early colonial America, Ubisoft has implemented the most coveted feature form the original games and applied it to an object most people can actually climb. Connor was able to jump on a tree and work his way around the branches is an extremely natural method. The most impressive thing was how organic the environment looked, making Connor’s traverse through the woods even more outstanding.

As he stood on a branch, a small British patrol walked below him. This was a chance for Ubisoft to showcase the new combat in the game. A rope dart was thrown at a walking guard which allowed Connor to use his weight as leverage to fall slowly from the tree. As the now dead guard hung from the branch, his comrades began engaging Connor in combat. Four guards formed a firing line as one began engaging the assassin directly. Connor then grappled his enemy and used him as a human shield against the barrage of bullets from the other guards. He then ran towards the now reloading firing line and engaged them at close range. Connor is a dual wielding expert, leading attacks to be much more varied and counters to be bloodier than ever.

Once the patrol was dispatched, Connor climbed a steep rock wall and approached the British camp. Here, Ubisoft showed the new stalking zones, small areas where an assassin can remain undetected. In prior games they were crowds, yet Assassin’s Creed 3’s wilderness provides vegetation for Connor to hide in. Once the target was in view, Connor jumped out of the bush, assassinated a guard while running, shoved another out of the way and jumped over a rock for an air assassination on Major Pitcarin while he was on a horse. Ubisoft is trying to make Connor an “assassin in motion,” creating new moves and counters that will allow players to never loose momentum while on the hunt.

Assassin’s Creed 3 is set to release on October 30, and judging from the massive line at PAX, fans cannot wait to get their hands on it. The video preview was impressive and the new features were cool, but we have yet to see to what level Ubisoft is able to take this franchise.