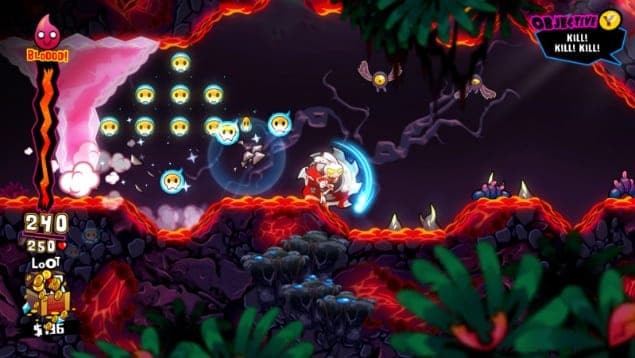 Hell Yeah! is a game about a rabbit named Ash, the prince of Hell who had some racy photos of him and his rubber ducky spread all over the internet. He also happens to have a short temper and could be considered clinically insane because his way of restoring his reputation is to simply kill everyone.

Developed by Arkedo Studios and published by Sega, Hell Yeah! is a colorful, gory, and energetic platformer that shares similarities to games that encourage exploration and backtracking, a genre often referred to as “Metroidvania.” As you make your way through the game, you’ll encounter areas you simply cannot pass through until you find a new weapon, power-up, or simply trigger a reaction in another area of your map.

As I played through the demo, Ash eventually picks up a rotary drill that not only serves as his main weapon, but also gives him the ability to “spin-dash” his way through the stage and off walls and ledges. I was instantly reminded of Sonic the Hedgehog. When I brought this up with Camille Guermonprez, Arkedo’s co-founder, he nodded and verified that this was in fact a reference to his studio’s relationship with Sega and, in a way, makes Ash out to be a “a bad Sonic with anger management issues.” 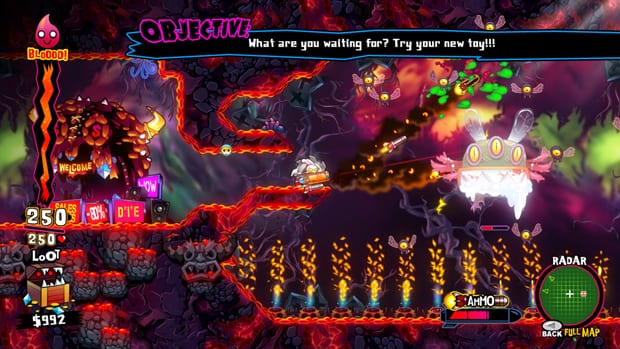 Once I got my rotary drill, Ash was also able to drill through pink crystals that blocked pathways and also held gems, the game’s currency, which I could later use to purchase missiles to defeat enemies that took no damage from my drill’s attacks. Guermonprez told me the game has 100 unique enemies, each with its own weakness and attack style. Some of these enemies also can’t simply be killed by running them over or shooting them with missiles so when you try to kill them, a mini-game will pop up on screen for you to play. Succeed in these game, whether it’s tapping buttons quickly, pressing them at a specific time, or hitting them in a specific order, and Ash will completely massacre his foes and gore will spew all over your screen. It’s quite colorful and also very graphic.

But that’s what also caught my attention about Hell Yeah! While the game may deal with sensitive topics, not every player will get its potty humor. Guermonprez compared this to Pixar movies where parents laugh at the subtle humor while kids may simply miss it altogether. His daughter for, example, has an innocent viewpoint as to why Ash is not happy that people saw him with his ducky. For her, he is simply angry. Still, the game will be rated M in the US but PEGI 12 in the UK. Localizing some of the game’s jokes has also proven difficult, he mentioned, as the subtle punch lines are often lost in translation. 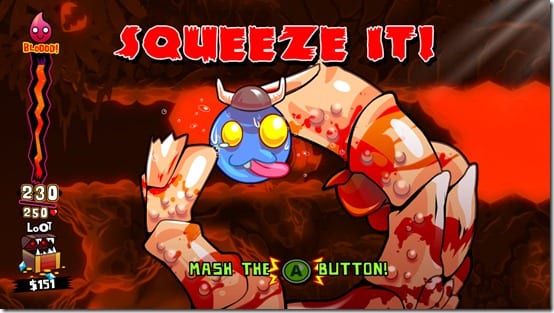 My brief demo with the game took me a while to complete simply because there was so much to explore and many areas that would require revisiting. There were a few instances of trial-and-error, and I was constantly looking at my map to see where I had to go next because there were so many interconnecting paths. When I defeated a monster, more paths opened up for me to discover. This, coupled with the various weapons you unlock, provided for a much layered experience.  Guermonprez promises Hell Yeah!’s single player mode is so huge and full of customization that he did not see a need for it to have a multiplayer mode.

While Guermonprez told me he literally finished the game on Thursday, the same day he left France to head to Boston, Hell Yeah! doesn’t have a definite release date yet. Expect the game to come out sometime this summer on both Xbox Live Arcade and PlayStation Network and expect to experience Hell in a whole new light.