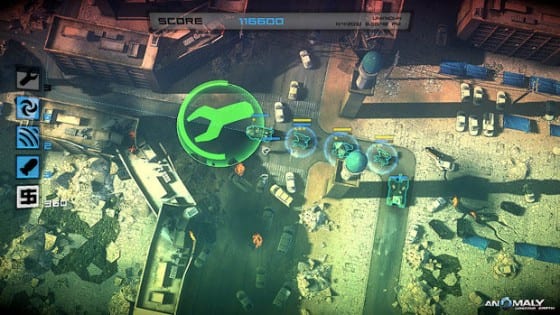 Want to win a copy of Anomaly Warzone Earth? Follow us @BlastMagazine and include us in your #FF post, we’ll pick a winner tonight!

Whenever I play an XLBA game, it’s always a different experience for me. I believe it has to do mostly with the way I used to view them; as cheap and quick ways to kill time. Now, I understand all videogames are time killers, but there was a key difference to me between a ‘mainstream’ game and an XLBA game. A game such as Mass Effect 3, I would plan a weekend around, whereas, a game such as Anomaly: Warzone Earth, is more or less a ‘I have 20 minutes to kill, let’s do this’ type of thing. So, you can imagine my surprise when I started playing, and one fresh 12 pack of Yoohoo later, I realized I had burned through 6 hours. Now, I will admit, with a little research, I would have known what I was getting into. This game already had a strong following on the PC, but I guess I wanted to surprise myself. I wanted to fully experience this game without giving other reviews the chance to skew my perception. But after playing this game and then reading the reviews for the PC version, I have to agree with them; this game is phenomenal.

So, an anomaly has landed in Baghdad and Tokyo, and your platoon, the prestigious 14 platoon, is assigned to be the first to investigate. Under the careful direction of General Jason Statham (Ok, so I know it’s not really Statham, but  with the picture the game gives, his voice, the wise cracking British jokes, and perhaps the Yoohoo messing with me, I came to believe the General was the street urchin we have all come to love in Lock, Stock, and Two Smoking Barrels), you are to investigate and help wherever you can. You accomplish this with an armada of armored vehicles, and tactical diversions in which you can position in any strategical way you see fit. This game demands that you breathe and eat strategy, and I loved it. I believe they stand correct in their claim that they have created a genre; reverse tower defense mixes real time strategy, tactical, and RPG into one delicious cake.

This game reminded me a lot of a fast paced chess game. You must know your opponent, you must anticipate his moves, you must set yourself up for the best possible outcome, and you must do this all on a fly to anticipate any shift in the game. This game truly was a workout for my mind, I had never really thought tactically before, mostly because I am not a military strategist, and I have a strong desire to get laid (so competitive chess was out of the picture), however, if the chess board would have been filled with military vehicles, and invading aliens, then perhaps, I would have discovered sooner the immense satisfaction one gets from winning a tactical battle.

The game truly puts all the power in your hands; from the route you take through the city, to the kind of troops you have, to what distraction you are going to use at certain moments. Am I going to go damage heavy and hope my tactical sandstorms will save their low armor from enemy fire? Or am I going to go armor heavy, and hope that their low damage output will whittle away at the enemy fast enough for their armor to hold? The game gives you certain incentives to help with this choice. You are awarded medals (gold, silver, bronze respectively), for fulfilling certain objectives. If you go damage heavy, you might get a gold for speed, but you might lose out on ruthlessness, because you can only take a certain amount of enemies due to your low armor and limited tactical diversions.

It may seem that it is impossible to get all gold medals. I mean, you sacrifice in one area, to gain leverage in another, but, I think this is where the game truly shines. You have the ability to sell and buy different troops on the fly. This really opens a lot of doors if you are really good at situational awareness. I think the other best advantage the game gives you, is dynamic checkpoints, and dyeing.

Dyeing may not seem like an advantage, but I learned more from being decimated then I did just blowing through a level. By dyeing, I was able to see what upcoming fights looked like, I was able to learn what routes to take for maximum efficiency, and I was able to learn what troops I needed and what troops I didn’t, and with all the checkpoints, I did not run the risk of restarting the whole level. I know many games have done this in the past, but Warzone does it better than anyone else. This game promotes learning and rewards you handsomely for it, and I think more games need to take this cue.

The Blast Factor: This game is all around stellar. From art direction to game play, music to voice acting, this game excels in all fields and is well deserving of its 5/5 rating. A side effect I was not expecting from this game is that it sort of… awakened me. I use to find XLBA games, and indie games for that matter, to be passé, cheap timewasters, and something to be easily ignored. I was a ‘mainstream’ elitist, and I had been metaphorically slapping down the idea of an indie game for years. Little did I know that I had been slapping the wrong people the whole time. The problem with mainstream games is that we as an audience have confined them. We have certain expectations and preconceptions that we enforce, and expect delivered by mainstream companies. They can be creative, but only in the parameters we have determined. Indie games don’t have these oppressions. Most of these companies are no names, or companies that have flown under the radar. Without this constant pressure, creativity and innovation flourishes in all directions. This unique creativity is what is responsible for such gems as Anomaly, Bastion, Journey, Limbo, and on and on. With my new found enlightenment, it would seem I have a lot of catching up to do.