I always loved Greek myth, mainly because it was predicated on the idea that our cosmic beginnings were just as filled with marital strife, petty greed and familial resentment as our normal lives are. The gods of old were just human beings with more power and cool toys, and they acted accordingly.

In this way, there’s actually a lot to recommend “Wrath of the Titans,” the completely unnecessary sequel to “Clash of the Titans,” which was the completely unnecessary re-make of 1981’s “Clash of the Titans.” Liam Neeson, reprising his role as Zeus, Ralph Fiennes as Hades and Edgar Ramirez as Ares all play their roles as normal people who happen to have the the creative powers of gods. They are jealous and hold grudges. They are capable to human love, and simple Freudian motivations.

The fact that all of them display atrocious acting skill in a story that makes little sense at the beginning and has little resolution at the end is almost beside the point. Almost.

“Wrath of the Titans,” is truly as ridiculous as you could imagine, with stodgy awkward dialogue and unnatural delivery from all those listed above, as well as leading man Perseus (Sam Worthington). There seems to be a beat between every line that comes out of the mouths of these worthy gentlemen, giving the film a quality of being a well-produced school play.

According to the story, the demigod Perseus is a now a widower with a young son, living his life out in a fishing village. Zeus, his father, comes to him and tells him that there something brewing in the state of Tartarus, and it might be Kronos. Or something. Frankly, I wasn’t paying that much attention during that part. Anyway, Zeus is kidnapped, and sapped of his power by a big Tim Burtony tree in Tartarus, and Perseus will have to save him before Earth is devoured by chimera. Or…something. Anyway Zeus’ power wakes up Kronos, and he’s trying to escape Tartarus, and destroy the Earth? And Rosamund Pike is Andromeda and her soldiers are fighting the Chimera? And there’s a big labyrinth to get to Tartarus?

I’m sorry what were you saying Liam Neeson? I dozed off for a bit there. Oh right, this is an insane plot created by three different writers who seem to have only a vague idea of what a complete narrative looks like. 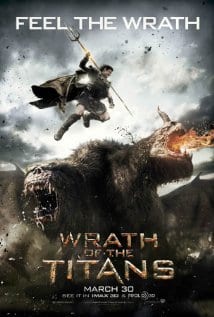 You know what I would love to see? I would love to see a Greek epic centered around an awkward and unsettling family reunion. Zeus would preside over everything as the blowhard family patriarch, Ares would be sulking in the corner stabbing at the roast, Athena and Hera would be snarking passive-aggressively over who’s the better cook. Kronos would be the slightly demented grandfather in the wheelchair at the end of the table, telling racist jokes, cracking on Aphrodite’s fake tits and making everyone uncomfortable. Hephaestus could still be played by Bill Nighy, needling the conservative Poseidon into a political argument and slipping food to Cerberus the three-headed dog under the table. The gods are just a dysfunctional family, like anyone else’s. So let’s just can the crappy 3D, and the chimera fights and the magic god weapons and watch these gods do something truly amazing: tolerate each other for several hours.