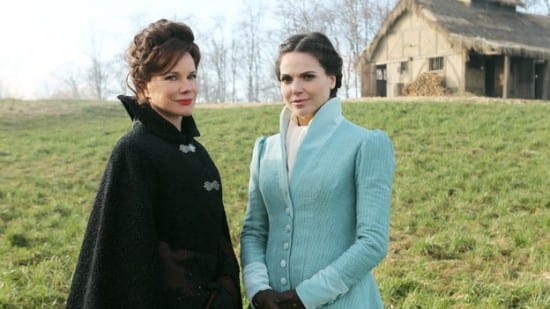 Barbara Hershey stars as the mother who turns her daughter, Regina (Lana Parilla), into a wicked queen.

Well, there you have it, folks. The question that OUAT has insisted you have been begging for an answer to “why does The Evil Queen (EQ) hate Snow White so gosh darn much?” has FINALLY been answered! Rumpelstiltskin be praised! And what gift of enlightenment have our overlord writers bestowed upon us meager humans?

Cut to Regina riding her beloved horse through the hillside after a a secret rendezvous with Daniel, the horse poop-scooping hunk, and suddenly a horse whizzes past with a little girl holding onto the reins for dear life. Regina rescues the child and the girl thanks her repeatedly for saving her life. They exchange pleasantries and—BOOM!—it’s a young Snow White.

I’ll just leave that tantalizing bit of mindf**k dangling there. Meanwhile, in Storybrooke, we’re transported a week into the past where Gold feeds Regina the plan to frame Snow for Kathryn’s murder. The only tidbit that I found revelatory was that the goal is not incarceration. Since they can’t jail her in the modest cells at the Sheriff’s office, she would have to be transported to some correctional facility outside of Storybrooke. But anyone who leaves Storybrooke, croaks. Also, Gold planted that key, as insurance, so that if she tried to flee, it would yield the same result. I knew that Gold was involved and guessed he was the Machiavellian mind behind it all, but there had to have been a more eloquent way to dump that information without an abrupt flashback.

At any rate, Regina stops by for a visit to Mary Margaret’s cell, just to rub her face in her misery. I dug that Regina was showing her vengeful self in a more sinister way, because usually she’s just twirling her mustache throwing banana peels in front of Emma. Her taunting felt more human, more grounded in bitterness. Whether that cold worldview is justified by the fairyback is something I’ll debate strongly, but it was good to see Regina as less of a prankster of more of a heartless woman out to deprive others of the happiness that was ripped from her.

Alan Dale also makes an appearance as District Attorney Spencer (not sure how this is an appropriate alter ego to King George, but whatever) to conduct a pre-trial interview of Mary Margaret. He grills her about how angry she must have been when Kathryn slapped her in public, and Mary starts off calm, sure that she didn’t want Kathryn “gone.” After recounting the ways in which her reputation was ruined though, Mary cracks. It fell pretty short of the realism achieved in “Law and Order” interrogations, but that’s mostly OUAT operating out of its comfort zone.

Grateful that Snow was saved from being trampled by her own horse (one of the most undignified ways to die), King Leopold uses Regina’s heroism as an excuse to cure his loneliness and proposes to the unsuspecting young lady. This was one instance where I flat out refused to suspend disbelief. I sympathize with a father who wants his kid to grow up with a mom. Hell, I even can feel for a man who misses a woman’s touch. What man doesn’t, like, all the time. But he has NEVER seen her in his life, didn’t even buy her dinner first, and lets face it—all she did was what any decent human being would do! Maybe we wouldn’t have been as flashy about it, but if I saw a kid clinging to a wild horse I would certainly call the police. So because she’s decent, and available, she’s it! I can forgive fairy tale contrivances like magic or fate, or true love (well, because that’s real, duh), but not behavior that disregards all logic and reason. If Leopold were high off his ass, maybe. Otherwise, no. Obviously, the ladder-climbing mother accepts the proposal.

Immediately, Regina runs to Daniel, the wannabe Brokeback Mountain man, and implores that they run away together. Considering you can’t say no to King Leopold, and her mother would surely use her powers (Oh yeah, she can  shoot stuff from her hands too) to keep the arrangement intact. Then Daniel proposes himself and as they lock lips to seal their union, and Snow stumbles into the stable. Indignant about what she’s witnessed she makes a mad dash for the woods and eventually Regina catches up. She schools Snow on true love and the kid perks up at the idea of such a powerful magic and swears she will keep her secret.

Speaking of powerful magic, what kind of sorcery did the casting department use to find a kid who looks so remarkably like Ginnifer Goodwin? And it doesn’t stop at an uncanny likeness. She nails the mannerisms, the expressions, even her speech patterns. It’s as if she studied Goodwin for months in preparation. Gotta hand it to them, they either lucked out big time or, someone in casting needs a significant raise. Bravo to this impressive young actress, Bailey Madison!

Emma’s investigation hits a snag, and August swings by and sees that she’s “grasping at straws.” He then starts into an awfully pedantic, but surprisingly astute lecture. He likens her detective skills to his writing: “If you get stuck, go back and reread, you might find a nugget of inspiration in what you’ve already done.” Emma acknowledges his wisdom and decides that with her new perspective she should visit the scene of the crime. Lo and behold, at the hole where Red dug up Kathryn’s heart she finds a shard from a shovel and bets it’s Regina’s. With Henry as inside man—a stellar moment of comedy is when he uses his Operation: Cobra code words and Emma admits, “Uh, I left my codebook at home”—she matches the shard to the shovel, but in painfully predictable fashion, when she comes back with a search warrant (the parameters of which are clearly fabricated) the shovel is missing. Shocker! Emma suspects August, her accomplice, squealed and he’s rightfully offended, but I feel like most viewers, myself included, knew that there were eyes and ears somewhere that tipped Regina off.

Then after some pressure from Cora whining about how she and Regina have drifted apart, the inevitable occurs. Reasoning that Regina shouldn’t lose her mother like she did, Snow divulges the secret upon which Regina’s future wrath hinges upon. Just as Regina is about to ride off into the night with Daniel, the horse and lady whisperer, Cora storms into the stable ready to shut it down. Regina pleads and pleads for her to be a loving parent and put her happiness first. It sure seems like a futile effort to argue with someone who says things like, “After all the sacrifices I’ve made!” and “It’s not your life, it’s mine!” Still, the couple falls for her calm and suddenly supportive demeanor. And as she relaying advice to Daniel about parenthood, she goes all barbarian and rips his heart out, crushing it into sand. She won’t console her daughter either, ranting instead about how “love is weakness, but power endures.”

This cutthroat attitude carries over to Storybrooke where Regina relishes in victory making Mary Margaret beg for her freedom. As I’ve already mentioned, this is the real-world evil I was hoping for, wielding her influence to make her enemies whimper in submission. It was the first time that I was sort of excited by her shenanigans, though I wish she was actually more in control since Gold could easily make the whole apparatus crumble from under her with how much she has depended on him. The showstopping moment is when she wipes away Mary Margaret’s tears as she screams that she’s innocent and doesn’t deserve this. Regina’s comforting words? “Oh I know, but you do deserve this.” Damn, it’s chilly in here.

In the coda to EQ’s evolution, she’s being fitted for her wedding gown and Snow says she’ll look beautiful for Daniel. The lightbulb goes off, and she asks Snow if she told her mother. In rare villainous form, she hides her disdain and assures Snow she isn’t mad. Under her breath she snarls, “I should have let her die on that horse.” As vital as it is for EQ to turn her vengeance upon Snow, I wanted real reason to question the princess’ squeaky clean image. I mean, although it was “true love,” her real-world counterpart is a mistress. Let’s give Snow some imperfections! Instead, she’s duped by Cora into believing she can trust her with the information. She’s still an innocent and does not deserve this crusade to destroy her. Cora deserves that and more! But EQ’s motivations for not turning on her mother are never explained. I assume some FTL equivalent of Stockholm Syndrome where the victim sympathizes with the aggressor, but that wasn’t on screen and it should be if this is the impetus for, well, everything that has happened.

In the final scenes, my suspicions were confirmed. Sidney Glass hid a bug in a vase he delivered to the sheriff’s office, which I remember seemed random, but it was subtle enough that I did forget about it, so well played, OUAT. Completely out of the blue though was the reveal of an alive Kathryn appearing in the alley behind Granny’s! I guess that means no more trial, which means no more bogus attempts at a legal drama, and tons of possibilities concerning how Gold pulled it off. He has to be the one behind her reappearance, right? He mentioned he could still “perform some miracles” to Emma.While I have my apprehensions about another character being motivated to do evil in the name of lost love, there were moments where I found myself unwillingly sucked in.

By surprising me with elevations in Lana Parilla’s performance, promise in Eion Bailey’s turn as August, the mysterious writer, and catching me off guard with the final twist, OUAT was able to balance out the absurdity of the fairyback where motivations did not match the vicious tone. For talking me off the ledge with trickery, OUAT effectively creates what Cora suggests may be the “fading illusion” of true love possessing the magic necessary to bring the show back from the depths.