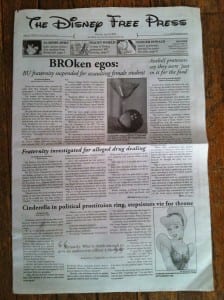 Sexual assault is never funny, nor is date rape, misogyny, public indecency, drug abuse or abuse of power.  Apparently Boston University’s Daily Free Press missed that message.  The paper published articles about all of the aforementioned atrocities as its idea of a prank.

Monday’s issue of the “FreeP,” as it is often called around campus, was the annual April Fool’s Day edition in which the paper always objectifies women and makes light of rape.  Year after year, the paper claims that it’s all a “joke,” but fails to realize that students are not laughing.

Although the majority of the articles in the issue were in some way offensive, the worst of the bunch was titled “BROken egos: BU fraternity suspended for assaulting female student.”  The article talks about  the seven dwarfs “gangbanging” Snow White after putting date rape drugs in her appletini.  The article uses triggering language and graphic description. This is particularly awful because it could be true.

Boston University has been dealing with multiple cases of sexual assault on and off campus in the past few months.  The Center for Gender, Sexuality and Activism has been working hard to help survivors of sexual assault and advocating for a rape crisis center on campus.  The Center has made incredible strides in combating rape culture on campus through communication with President Brown and through events such as last Friday’s Take Back the Night; however, the FreeP has nearly reversed the progress made.  Just when people were starting to realize that rape culture is prevalent on campus, the FreeP made a joke of it.

The issue also contained an article about Donald Duck, a supposed BU hockey player, being caught pants-less on campus.  In light of the recent sexual assaults allegedly committed by hockey players, this article could be severely emotionally damaging to the survivors of those specific assaults.  The article took a specific case, that real women on campus endured, and made a joke of it.  Sexual assault is hard for survivors to deal with without a campus wide publication telling them that it equates to a comical cartoon situation.

The paper issued an official apology after a tremendous outcry from the student body, however it was too little too late.  The FreeP called their actions “callous and ignorant,” and claimed that they aimed to produce satire to be seen as “ridiculous.”  However rape has been very real and tangible on campus. How could it be ridiculous?

The paper also claimed that it did not intend to call out specific organizations on campus, which is blatantly false.  The “BROken Egos” article specifically targeted the Center for Gender, Sexuality and Activism by using almost its exact name and publishing fictitious quotes by the president of the Center, whom the paper has had qualms with before.

This is not the first time the Free Press has published misogynistic and offensive articles.  Last April Fools Day, the paper featured similarly offensive articles in the Lord of the Rings themed issue, claiming the Women’s Resource Center (now the Center for Gender, Sexuality and Activism) needed “a good, hard wizard staff” instead of females being in charge. Pun intended, in poor taste.

Yes, these issues showed poor judgment, but they also showed so much more.  They showed disregard to the student body. They showed blatant disrespect toward any organization on campus that has made an effort to quell rape culture. Most of all, they showed insensitivity toward survivors of sexual assault.

The Free Press is breaking all the rules and they deserve to pay for it.  There is no graceful way to recover from this, and the reputation of the paper (they won a mark in excellence award from the Society of Professional Journalists last year) may be permanently damaged.  In addition to the apology already issued, the editor in chief and managing editor must resign; specific apologies should be given to those directly targeted; the administration should pull any money left; finally, advertisers must pull out.

This isn’t a joke.  The Boston University community must show the Free Press that it isn’t laughing.

Disclaimer: the author of this post volunteers at BU’s CGSA and is a Boston University student.