At 10 minutes to show time, almost every band on the bill was present and accounted for. The doorman was still missing, but he was probably just running late. Outside, a patch of lousy smarch weather dampened the dirty sidewalk.

The circumstances at O’Brien’s Pub last weekend, through no fault of the venue, were not exactly conducive to a rowdy rock and roll show. It was Sunday, too, and barely the afternoon. Allston seemed busy nursing its hangover.

The crowd inside could accurately be called a crowd: 40 or so people, more than half of O’Brien’s room capacity. They were well into their first Sunday beers. No coffee or brunch on this menu. The video golf machine in the corner? Dead, unplugged. Al the sound guy had the Descendents on the PA. He untangled cables and tried to reach the doorman on his cell phone. There was change to make, and a lot of hands to mark. No answer.

Enter Ryan Agate. Oh, he’ll take the door for now, no problem. After all, Ryan The Terrible—as he’s known on flyers—booked this show, the fourth in a weekly series of Sunday matinees that he’s aptly named “Day-Drunk Pop-Punk”. 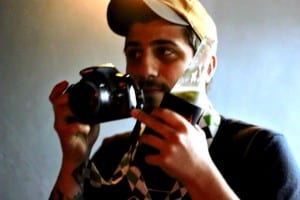 “This [series] has been surprisingly successful,” he says, sipping a Miller High Life kept cool by a koozie brought from home. “We usually get 30 or 40 people. It helps I made a catchy name.”

Along with his ability to alliterate, um, alluringly, Agate is a rock promoter who can juggle the duties of talent buyer, graphic designer, band mother, ringleader, heckler, and, yes, even doorman. He’s almost too cheery to be drinking this early. His upbeat attitude can seem a little at odds with that of the “older, jaded punk rock bands” he tends to support, but someone has to keep the show on schedule – even if its theme is three-chord tunes and, well, drinking early.

Agate is only one of many Boston promoters trying to do one thing: set up the kinds of shows they wish they could attend. It’s not always easy, especially for younger bands who try to do it themselves. The city has a reputation for being an absolute haven for new music, and boy, is it ever. Yet very few Boston-bred artists get more than a dollop of national attention before they fizzle out, or relocate to New York to fizzle out.

Chalk it up to a problem of logistics. That’s where promoters come in. Will Mayo, who organizes noise, psych, and other self-proclaimed “weird” shows, understands that the prime directive of any artist is to find a place to showcase their work.

“The hardest part [about Boston] is the lack of venues and the city’s lack of support for the non-commercial elements of the art and music scenes” Mayo says. “That issue is compounded by the fact that people tend to leave Boston shortly after they’re done with school.”

Those very kids make up much of the target demographic for small club shows, and so they remain small, as if by design. This is far from a destructive force, but it does have a crowding effect. In a city full of smart, creative folks, there is an awful lot of good music to take in, on a variety of scales. It can be daunting to a fan and unforgiving to an artist.

A vast network of bands, movements, scenes, collectives, venues, clubs, and promoters all compete for attention. And they change rapidly about every four years. The hyper-specificity of Agate’s Sunday shows isn’t just a cute gimmick; it’s a rallying cry to the music’s base.

“One of the things that I try to do is to be the voice for those smaller bands,” Agate says. “Get them into a real venue so they can play for people they wouldn’t normally play for. And it’s worked out really well for some of those bands.”

Boston has a wealth of those “smaller bands,” and they find places to play even if the corporate-owned venues on Lansdowne Street aren’t offering opener slots (national booking agents generally pick those). Throughout the week, dozens of houses and basements around town operate under the radar.

Spaces like the Democracy Center and Lorem Ipsum Books also open their doors for all-ages shows. Neighborhood bars like P.A.’s Lounge and the Midway Cafe give way to mid-sized clubs like the Middle East and Great Scott.Agate and Mayo have booked pretty much all of them at one time or another, and they’ve been at it for nearly a decade, first in service to artists they like.

A principled approach like this begs for red tape. Most music venues, even non-profit spaces and event halls, require room costs. Some bars will have to make a certain amount of money in drink sales before the bands can see any of it. Most promoters are no strangers to having to pay their bands out of pocket at times. The age restrictions at bars pose an even weightier issue: why book a band at a place many of its fans aren’t allowed to enter?

The Democracy Center in Harvard Square solves this problem with three rules: shows must admit all ages, be booze-free, and end by 11. Kimberly Jane, who works part-time at the non-profit, also books hardcore shows in its ballroom. They’ve caused a few broken windows here and there, but have done well enough lately for Jane to start a fund for such incidental repairs.

“It’s really important to me that everybody who wants to see a show can,” she says. “When people are shut out because of age, it’s very clearly a nod to alcohol sales. I go to shows because I want to hear the music. If you want to drink, there are bars around, and there’s a river you can walk to and drink at. Just because a space is alcohol-free doesn’t mean you shouldn’t go to shows there.”

The Democracy Center challenges more than a lack of all-ages shows. The venue hosted part of last weekend’s Smash It Dead Fest, a three-day event featuring more than 25 bands benefiting the Boston Area Rape Crisis Center. Jane was part of a collective that raised more than $4,000 for the center.

But big charitable festivals simply can’t happen every weekend. Smash It Dead required months of planning, and went smoothly thanks to lessons learned from the previous year’s effort, when a slew of last-minute venue changes nearly derailed the event.

Agate has had some time to learn tricks of the trade, too, if on a smaller scale: work with people and places you like, book shows in all sorts of spaces, see what works for what kind of gig, avoid shows in January.

He says the hardest part about booking shows in Boston is trying to make the bands happy. He’s a guy who knows his audience because he is his audience, often no more or less than a friend of the band. For his purposes, all-ages shows aren’t a necessity.

“Of course there are disadvantages to doing shows in bars,” Agate says. “Certain people won’t attend age-restricted shows, even if they’re of age, on principle, and that’s a valid point. But it makes my job easy to have a sound guy and a bartender at a place like O’Brien’s. If I can make 10 people come through the door, I can pay the bands.”

Three blocks from O’Brien’s, though, starts a spread of lofts and basements that take care of their bands in a different way: they’re usually absolutely bonkers. “I mainly appreciate working with bars for the simple fact that they’re reliable,” admits Will Mayo. “Of course, the wild energy of the basement is hard to capture elsewhere.”

One such Allston space sprouted up last year thanks to the efforts of Nate Richardson and Ben Henry. They’re nothing more than two brazen knuckleheads who “sling food poorly” for work and strive to put on good shows for their friends’ bands. Though they admit to “stealing the business model” from Somerville’s famed studio/space Starlab, “they’re way better than us,” says Henry. “They drink less during shows, book better shows, and are much nicer guys.”

“Yeah,” says Richardson. “They probably use a calendar.”

These two dudes pay for their room themselves, though. Even if the show doesn’t go so well (i.e.: graffiti, fireworks, windows kicked out, people thrown down stairs), the band on tour is usually compensated, and the local acts will get to play for their friends and maybe make some new ones.

“You can’t always get the band more money at a bar,” says Richardson. “Sometimes you can’t get the band any money. A bar is going to be pretty strict on their room cost. We try to be strict on ours, but if the band’s not getting paid, we’d rather pay the band than take the room fee.” 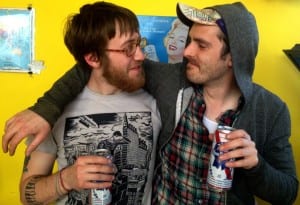 Richardson’s option to forgo his own room fee is not one afforded to legitimate venues. Unlisted, donation-driven shows, where the floor is as shaky as the legality, are asking to be shut down. For all the righteousness, a nagging struggle over money remains. Touring bands are likely to be assertive about how the money at a gig gets handled. Booking agents are more likely to make unreasonable demands far before the date is ever set. Both The Terrible Agate and the Democracy Center’s Jane admit to simply crossing off much of a band’s tour rider. It’s never out of spite – again, it’s a problem of logistics.

“Apparently there’s a lot of money in show-booking that I don’t know about,” says Agate, who prefers to pay out with a divided percentage of the door. “I know what the bands make. I know what the shows make. I don’t make anything. A lot of bands and venues don’t make anything. Where’s the money in this? A lot of people wrongfully assume that bars are making hundreds of thousands of dollars. A perfect example is a Monday night at Charlie’s [Kitchen in Cambridge]: if we make 300 bucks at the bar we’re doing all right.”

For the moment at least, so is Boston’s music scene. Its promoters are its unsung heroes, sacrificing time, money and windows. Bands and venues will come and go. Trends will sparkle and fade. Students will graduate and move back home. Yet against all odds, there’s still always something going on, if you know where to look.