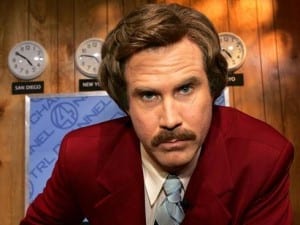 After years of chatter and online rumors, a sequel to the cult comedy favorite Anchorman: The Legend of Ron Burgundy is confirmed.

Will Ferrell, dressed as newsman Ron Burgundy, broke the news while making a surprise appearance on Conan that thrilled the audience. Ferrell/Burgundy took control of the stage playing a flute solo and explained to Conan O’Brien, ”I like to keep my chops up, jam with the cats here… smoke a little tea afterwards, see if a little backstage Judy ends up on my lap.”

After complimenting O’Brien on his broadcasting skills, Burgundy shared one small criticism with him. “You look awful,” Burgundy said. “You look like someone put a bright red fright wig on a skeleton and chucked it out of a helicopter.”

Burgundy wasn’t just there to play the flute and insult Conan O’Brien. He also had exciting news. “I want to announce this to everyone here in the Americas,” he said. “To my friends, in Spain, Turkey and the U.K., including England… as of 0900 Mountain Time, Paramount Pictures and myself, Ronald Joseph Aaron Burgundy, have come to terms on a sequel for Anchorman. It is official, there will be a sequel to Anchorman.”

Afterwards, Burgundy played a second flute solo. Back in early 2010, Anchorman director and co-writer Adam McKay told MTV News that he expected much of the first movie’s cast to come along for the sequel, including Steve Carell and Paul Rudd, as well as Christina Applegate, David Koechner, Chris Parnell and Fred Willard.

“We had an idea and we contacted Steve and Paul and Koechner and Christina and checked in with everyone and they were all game for it,” McKay said at the time. “It’s a tricky movie because everyone went and did really well after it, so everyone’s prices went up and everyone’s time got a little more valuable. But at the same time, graciously, Steve and Paul and everyone agreed to cut their price to come and do it, which you don’t see very often in Hollywood — and cut their price substantially.”

The original grossed more than $91 million worldwide. Ferrell and McKay will once again co-write for the sequel and McKay will direct again, with production slated to begin at the end of this year for a 2013 release.