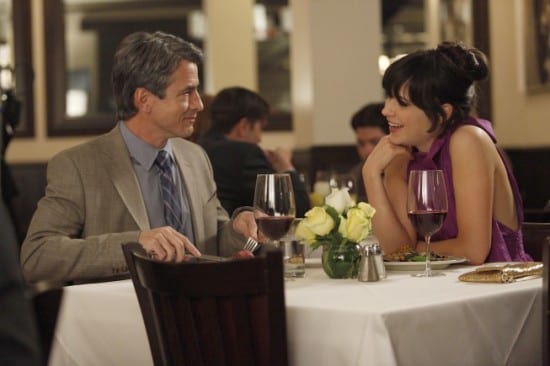 Don’t look now, but the “New Girl” on the block has a formidable new posse.

And with the quirkiness and “adorkability” quotient spread out among them, instead of being concentrated in the the tractor beam of Zooey Deschanel’s doe eyes, it has allowed the funny elements—like the Fancyman arc—to permeate. Whereas last week undercut the social class clash with a “the gang needs to grow up” mantra, this week ditched any semblance of social commentary for the latter. Wacky escalations of their resistance to evolution end up providing multiple kicks in the pants.

To start the program, in place of a thought-provoking discussion of the staggering wealth gap, we’re treated to a perhaps equally divisive philosophical question: What do you call it when a man pees with a shirt on, but his pants down?  I found this question hilarious, and the continually impressive group dynamic did not disappoint. Jess thought it would be called a “Tony the Tiger,” but Schmidt points out that Tony only sports a bandana around his neck. Winston says it could be any of the Chipmunks: Alvin, Simon or Theodore. But Schmidt seems to have the final word when he surmises, “Any cartoon bear really, except for Yogi, who is just a bear with a tie.”

This scene set the tone for the rest of the episode for me. Though Nick and Jess (and Nick’s law school buddy, Dirk) would be in one setting, and Winston, Cece and Schmidt would occupy another, the thematic tie of this Fancyman epic brought out the best in all of them. And when you have this makeshift family on a collision course to confront an issue it seems to encourage a comedic one-upsmanship among the actors, which coaxed out a gem with a laughs per minute rival to “The Story of the 50” while challenging “Jess and Julia” in the progress department.

As I alluded to, Dirk (played by bit-part showstopper Martin Starr), has come to visit the loft and Nick seems to be the only one who sees any redeeming qualities within him. Dirk’s a pseudo-acadamic, whose lecture on the link between Dylan Thomas and Bob Dylan said nothing and yet knocked the socks off his undergraduate students. Although, I was unclear if he was the professor of the stereotypically thick-headed coeds, or if he just called himself Professor because he’s a “degree collector” according to Nick. Jess finds him particularly creepy, put off by his lady scarves and his sexual advances equally.

Cece then storms in and after a skeezey come-on by Dirk, Cece admits to seeing someone, whom we all know is Schmidt. So, he takes it to heart when Dirk insinuates that Cece prefers her relationship because she is the boss and her man is the submissive “sex-retary.” One thing you can’t deny about Dirk, he may essentially be a pretentious bum, but he does read people effectively. Therefore, when Cece throws herself and a granola bar at him, begging to add something called “The Horse Trough” (this prospect both excited and scared the crap out of me) to their sexual repertoire, Schmidt is for once not in the mood. Cece summons her “girls” (coincidentally actress Hannah Simone does have it going on in the chest area, and pulls off her role as a supermodel convincingly) to settle the argument. Schmidt calls them Harold and Kumar (tee hee). And although I’m sure the pair has squashed many a squabble, Schmidt only reminisces on the many zany adventures they’ve had, but insists he can’t go to White Castle.

Winston asks to borrow Schmidt’s car, nay “Manbulance,” (every detail about Schmidt, including his possessions are tailored to perfection) to drive newly anointed girlfriend, Shelby, to the airport. She’s off to Mexico with the girls, and she seems to be searching for a reason not to go. Winston acts the part of supportive boyfriend, but botches the execution by saying, “We could both use some space.” Dirk breaks it down for him post-lecture: when you don’t allow a woman room to move, then it’s hard for her to have sex with other people. But when you give her space to move around, she could be having so much sex. It’s basic, and assumes the worst in women, but his teachings worry Winston to the point of panic.

Then we come to Jess, and the Fancyman saga. Her second date with Russell (Dermot Mulroney) ends awkwardly when he leans in, only to give her an affection-less back pat. On their third date, with the lingering tension from that mishap hanging over her, Jess awkwardly (as she’s prone to act when under pressure) avoids the topic—in the worst and yet funniest way possible—with references to his age, such as how sad it was when the Beatles broke up (he was one) and if he’s gotten his prostate checked (she had her breast exam and it’s all boob in there). After Russell catches on to her antics she blurts out, “Why didn’t you kiss me the other night?” Subsequently, he receives a text and bolts. He leans in again too, but only to leave her $100 for cab fare.

A busy night soldiers on with Cece desperate for some Schmidt-tastic sex. This concerned me slightly, only because this insatiable side is the only we’ve seen, but when she confesses to not wanting to mess with what they have later, those worries were assuaged. Still, I hope that the dimensions of Cece are more defined if the relationship does indeed last. If anything else, it was silly to see such a knockout struggling to seduce Schmidt and come up short. Cece then concedes she will do anything, anywhere. Without hesitation, Schmidt deploys Fantasy Location #3, setting up a reveal that I trusted “New Girl” would follow through.

Dirk attempts to boost Nick’s confidence, claiming he used to melt the panties off girls in law school. “If panties were snow, you were March, bro.” But Nick is painfully out of his element as he reluctantly consents to an afterparty in the loft. When he realizes, however, that twenty-year old girls think he’s awesome just because he knows how to make drinks, he embraces their carefree antics and his inner frat boy comes out to play. He brags to Jess, “I’m Skylar’s Fancyman,” bringing it all full circle with the first part (last episode) where he had admired the pride and prowess of Russell, having not felt that kind of nobility since those collegiate glory days. Even Jess joins in when she returns, depressed that she’s pushing thirty and “will probably die alone.” She escapes into a realm where she reigns as “Flip Queen.” (for my older set, Flip Cup is a drinking game where…well, you flip cups).

After leaving a crazed message, that comes off more creepy than sincere (“I want the air you breathe to be the air I breathe until we’re both inhaling carbon dioxide and we pass out and die”), Winston “borrows” the Manbulance. Now, let’s play a game real fast. Where do you think Fantasy Location #3 is? I’ll wait….Time’s up. If you guessed the trunk of the Manbulance you win! What’s that? Oh, you get nothing, just the satisfaction of—yeah, I let myself down, too. But that twist felt earned to me, because Schmidt would pride himself on having sex in the roomy trunk of his car.

Winston doesn’t discover their presence until a prying border patrolman notices them when Winston crosses back into America after a phone reconciliation with Shelby . I adored the cheesiness of his pleas to win back her affections like, “You make me so brave” and referring to her “soul song.” The sort of nod that black folks don’t talk that different in relationships from white folks was refreshing. I thought a lot of the jokes were as witty as they were sophomoric actually. Also, any time I’m blessed with hearing Lamorne Morris belt out the soundtrack to “Wicked” (which I may, or may not, know well myself) is wonderful. The horror and utter disbelief was sold by Morris as well, and I can already tell next week will be a hilarious reveal for Nick and Jess. Does this mean I need to give them a couple name? How does Schmece (pronounced SHMEE-CEE) sound?

The denial duo get far too plastered before Russell shows up to talk privately with Jess. He selflessly offers rides to some of the young females, and Nick tags along and confirms my past commendations of drunken Nick. But besides that, a small miracle occurs. Dermot Mulroney pulls off potentially the single worst line, on its own, that I’ve ever heard. And yet he delivers it with such charisma, vulnerability, and silver-haired foxiness that even as a straight man I’m sold: “I wanted to kiss you the other night. I wanted to do more than kiss you. I’d like to ‘do’ you at some point. I can really give it to you. But I’ve forgotten how to tell when it’s the right moment. I was nervous.” HOW IN THE WORLD?! If I EVER tried that line out on a woman, I would get slapped so hard I’d consider a lawsuit for pain and suffering and worker’s compensation for all the recovery time necessary. And he, got his kiss. But that’s the timeless allure of Dermot Mulroney for you.

Thanks to Mulroney, and Martin Starr’s static shock-inducing dry wit, this episode reeked of sleaze. But it never felt malicious or threatening, and sort of exuded a humility, a desperation for something, someone, to hold on to. The justification for the Fancyman saga is centered around how it forced everyone involved to grow up. Winston and Shelby and Schmece (I like it) were able to voice what they mean to each other, Jess expressed her concerns that she wasn’t sophisticated enough for Russell (who apparently owns a hot air balloon and a hangar), and Nick will surely have a revelation about the direction of his life once “the poison” has left his body. Speaking of which, Nick panicking post-puke, thinking he was lost in the woods when the car couldn’t have been more than thirty yards behind him, was comedic gold. And I must admit, even sober, I don’t know the answer to his inebriated pondering, “When does a hill become a mountain?”

For sticking the landing on what seemed like a crummy excuse for a two-parter and for executing four separate plots—and intersecting them effortlessly, so that they consolidated into two by the end—that expanded upon the concept of maturation for each of them, I must acknowledge the self-awareness that has been masterfully woven into the fabric of the series. Elizabeth Meriwether and company took what could have been a cash cow, and has made it possibly prize-winning pig—both smart and filthy. As I’d alluded to, it’s up there with the other contenders which narrowly missed a KO, but scored a nothing-to-sneeze-at A-.

– “Guys my age…they just wanna go for the gold. And I’m stingy with my gold, unless they dig for it.”

– “Russell said he runs with the bulls, and quote, not the tourist-y ones in Pamplona, end quote.”

– “If you’re going to seduce me, don’t dress up like my Aunt Frieda at Seder.”

– Undergrad student Skylar to Nick: “You can get me drunk, professionally?”

– “Why is the cast of ‘The Social Network’ in our apartment?”

– Schmidt: So you’re saying you’d rather sit in my urine for the rest of the car ride than admit to Winston we’re sleeping together?  Cece: Yup absolutely don’t even have to think about it.