EA Sports should take it as nothing short of divine intervention that mere hours before the release of Tiger Woods PGA Tour 13, the game’s much embattled cover boy won his first tournament in years; guaranteeing that  he, and thus the game will be on every news cast, sports show and gossip monger’s lips for weeks to come. Truth be told though, the game didn’t need the extra stroke of publicity luck; unlike Woods himself, his golf series has been a long standing benchmark not just in golf games (slim pickings there), but in sports games in general. Sure, if you’re an every year player, the changes may not seem that revolutionary, but the amount of detail and depth found in this year’s Tiger title makes this a must play — for most people.

The biggest addition to this year’s game is the new Total Swing Control system, which adds an incredible amount of depth to the game. You’ll still tee off with the right thumbstick, but now, speed, tempo and control are all taken into account, and actual talent comes into play. It took me quite a few times to adjust to the new control scheme, but after while, it becomes very natural and fluent. Total Swing allows for a lot of strategy, and perfecting is means dropping shots just where you want them, while struggling with it means hooking shots and bending a ton of clubs.

PGA Tour 13 also gives players freedom over just where they hit the ball, adding even more depth to an already stellar experience. Need some height? Aim your shot for the bottom of the ball. Need a line drive for distance? Aim for the middle. This combined with the Total Swing Control System makes for an incredibly deep, system that’s still fun to learn. One could make the case that it’s almost too deep, that it requires an abnormal amount of skill, that its akin to actually being skilled at the game, but PGA 13 does a great job easing you in to its more depth features in a way that it never seems like it’s too much at one time. Everything you’re doing feels like the next logical progression of what you did before it. Does that mean I was any good at it? As in my real golf game — god no.

On top of that, PGA Tour 13 does a great job taking control for players who aren’t quite catching on. Using the caddy system, you’re able have the game line up your shots, select your clubs and do just about everything from take the shot for you. The team at EA Sports has done a remarkable job taking a deep gameplay system and making it accessible for all types of gamers. Is this Hot Shots Golf accessible? No, but it’s still a big step and it will make the game playable by a lot more people.

The game also features full motion support for both platforms, and while Move support has been around for the last few years, this is the first time Kinect is fully supported by the title. It’s functional enough, and the first few times, it’s really cool to swing in real life, but it gets old, especially when you take into account how twitchy it can be. The voice control works well, I was able to change clubs on the fly and was able to ask my caddie for assistance — and it was very responsive. Just take one piece of advice for me — don’t try to use Kinect to navigate the game’s menu system. Tiger Woods always seemed like one of the most natural fits for the peripheral, and it’s good to see it implemented, even if it doesn’t always work as it should.

PGA Tour 13 is easily the best looking of the series thus far as everything looks phenomenal. As a yearly Madden player (go ahead — flame), I found myself getting jealous at how good some of the players looked in the game. How come Tiger Looks so much like Tiger, but we get an Aaron Rodgers that looks like a whacked out freak? That doesn’t compare to the courses though, which are filled with sweeping vistas and remarkable lighting effects. 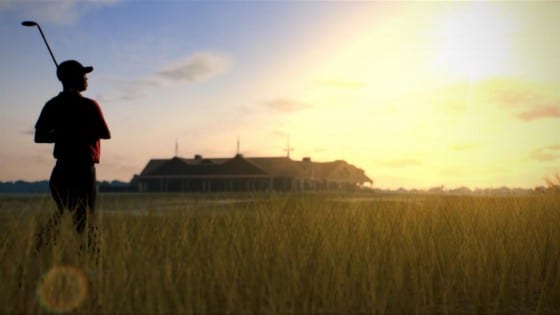 Unfortunately, the new modes available in PGA tour 13 are less than stellar. There’s the Legacy Mode, which finds you recreating the career milestones of the game’s coverboy, and is very underwhelming and oddly uneven. Why am I sinking a putt on national TV before I even practice in my dad’s backyard? There aren’t any real “money moments” that are worth writing about, and my guess is that the legacy mode will be a last ditch effort for most of the game’s core players. The online suite also allows players to create their own country clubs, which will appeal to those who really enjoy the experience, but it will be lost on those who don’t. Plus, you can’t create Bushwood authentically — I tried.