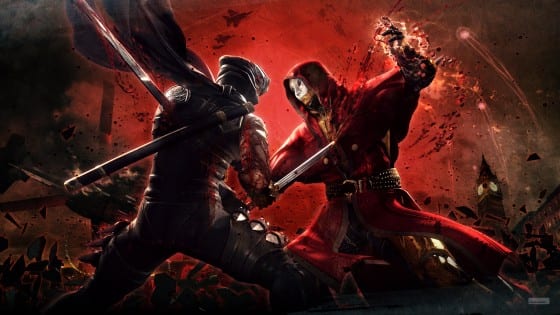 Developed by: Team Ninja
Published by: Tecmo Koei
Genre: Action
Platform: Xbox 360, PS3
Play it if: You really want to be disappointed
Skip it if: You’ve played the previous games
[rating:1.5/4]

When David Lee Roth left Van Halen, it took some time for the band to hit their stride again — but we eventually warmed to Sammy Hagar. When Steve Carell left the office, it took a few episodes for the show to find the right comedic rhythm, but Dwight and Jim eventually found their place. There’s a big part of me that hopes that Team Ninja is merely trying to find their rhythm following the departure of series creator and studio frontman Tomonobu Itagaki — because as hard as this is to accept, the long awaited Ninja Gaiden 3 is nothing short of a spectacular failure.

The previous Ninja Gaiden games had a bit of a reputation — they weren’t just action games, they were action games with substance. Renown for their difficulty and depth, Team Ninja created some of the most memorable moments in recent memory — but not here. Ninja Gaiden 3 trades all of that in for cheap mechanics, and buggy, unpolished gameplay — then tops it all off with one of the worst cameras seen in a modern action game.

Ninja Gaiden 3 again places in you the shoes of the masked Ninja Ryu Hayabusa who gets a request to fight English terrorists from the Ministry of External Affairs. This leads to Ryu having to deal with an organization called The Regent of the Mask, who aims to destroy the world in seven days if every country doesn’t surrender. For what it’s worth, it’s easily the most intelligible story that the franchise has ever seen — it’s just when it goes beyond that, where we start to see the game suffer.

The problems begin early in the game, after you’ve already dispatched a ton of nameless, faceless enemies, you come across one who’s begging for his life. He’s got Kids — this is just a job! He screams at you, you back him into a semi-truck and stand there. This is where you would more than likely believe that you’d get the moral choice whether to kill the man or not — nope; you’ve got to shred him, and it’s easily one of the most uncomfortable moments I’ve played in a game.  It’s also almost a bit insulting that later on in the game, the campaign tries to tell you a moral of choice, and tells you how you’re not a murderer. Yeah, I’ve just wasted a ton of guys who were begging me to spare them — oh yeah, I’m a frickin’ saint.

It’s clear very early in the game that Team Ninja is guilty of being incredibly gluttonous with its features on as a result – -the game suffers majorly from overkill, and key among them is the inclusion of quicktime events. Now, I normally don’t mind a few quicktime events thrown into games for good measure, but it quickly becomes too much here. The main menu is a quicktime event. The main friggin’ menu! You literally have to keep hitting the buttons on the screen to advance to the game itself. In fact, there’s an almost embarrassing amount of these quicktime events within the game’s first ten minutes. Jump off that building to avoid the rockets? Quicktime! Slide down that alley? Quicktime!

By far though, the most infuriating use of these quicktime events is how often they pop up in regular. Literally every person you fight, the game will prompt a quicktime event. So yeah, it’s cool the first time to see Ryu chop off some guy’s head the first few times, but when it happens so often — it just gets in the way. There are two main attack buttons in Ninja Gaiden 3, and you’ll find yourself trying to find ways to use both of them that won’t trigger these quicktime events, but good luck. Oh, and there’s magic you can do too — but it too is the victim of overkill, as everytime..every single time that you trigger it, you’re treated to a lengthy animation that you can’t skip for any reason.

It also doesn’t help that Ninja Gaiden 3 features a remarkably broken camera that seems intent on giving you the worst possible angles in every possible situation.  Oh, you want me to slaughter those guys over there? Sure! Wait, I can’t even look at them? That’s going to be an issue. There were multiple times throughout the campaign that I kept taking damage from someone, but to find them I had to wildly swing the camera one way or another. A game’s main draw should not be this hard.

Ninja Gaiden 3 does have its moments though, like getting into a rhythm against a crowd of baddies and laying waste to them. There’s also a pretty stellar T-Rex boss battle that stands out (as long as you don’t question why it suddenly becomes mechanical halfway through the fight). None of this can save the game however, as Team Ninja has stripped the game of what made the series so fun. There’s no challenge here, and while accessibility is great — substituting challenge for a just throwing a bunch of enemies on screen at one time is not the way to go about it. Ninja Gaiden 3 lacks the personality, depth and appeal that those games that came before it did, and it’s sad.

It pains me a bit to say this, but Ninja Gaiden 3 is just short of terrible. Redeemed by a few enjoyable sections, it’s a sloppy mess of failed mechanics and additions that just plain don’t work. The game manages to strip the series of everything it’s been known for and substitutes a sub par action game in its place. Come back Itagaki..we miss you more than ever.