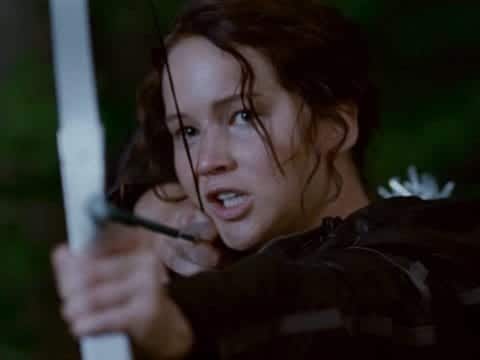 Never send a boy to do a man’s work or so the old saying does. But what about sending a man to a boy’s (or girl’s) movie? Such was the question I asked myself when Blast Magazine asked me to review the latest sensation in the young adult novel/movie genre: “The Hunger Games”.

I was not a fan of “Twilight” and checked out after the first film. It was a decent enough movie, but it didn’t hold my interest. Something about a rural, logging town in Washington State where everyone looks as if he or she walked out of an Old Navy ad did not sit right with me.

“Twilight” was pretty much my only frame of reference as I sat down for “The Hunger Games”. I hadn’t read the novel and only vaguely knew it was set in a bleak future. This post-apocalyptic future works to “The Hunger Games'” advantage, for I was not relating the action in the movie to any real life situation— whereas in “Twilight”, despite the vampire aspect, the story world was very much present day America. Thus, a detail about “The Hunger Games,” where our protagonists come from a starving community but seem too rosy in the face, bothered me less than the lapses of logic in “Twilight”.

A quick plot summary: “The Hunger Games” depicts a world where an autocratic central government holds twelve outlying districts under its sway. In return for protection, every year each district sends two of its children –a boy and a girl—as “tributes” to compete in a battle to the death, with only one winner emerging. The “Hunger Games” are a hugely popular television show, and the society seems to revolve around this mashup of American Idol and Survivor. But in this reality show competitors don’t vie for points, cash, or flattering comments. They want each other’s blood. 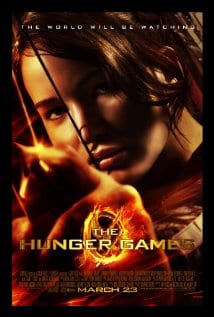 From District 12, we follow Katniss Everdeen and Peeta Mellark as they are chosen (Katniss volunteers to go in place of her frail sister), trained, and set loose in the wilderness to fight for survival against an array of other children, some savage and some ill prepared for this deadliest of games.

“The Hunger Games” very much reminded me of “The Running Man,” the Arnold Schwarzenegger action vehicle where political criminals are stalked in a game zone by maniacal gladiators while rabid fans watch on television and bet how long competitors will survive. “The Running Man” seemed to succeed more than “The Hunger Games,” for not only does Arnold’s character survive, but he also manages to launch a rebellion against the oppressive state which sponsors the show. Perhaps this will occur in what appeared to be the set up for an inevitable trilogy at the “The Hunger Games” end, but since we don’t see that in this chapter of story, the latter half of the movie felt flat.

Indeed, there seems to be a moment in “The Hunger Games” when Katniss’s heroics put the game’s producers on edge. They scramble to change the rules to the game as a rebellion breaks out in one of the districts. There can be only one, (for you “Highlander” fans) becomes Well, there can be two. But then the rules change again…and again…and nothing seems to come of Katniss’s triumph (plot spoiler: she survives). In a movie where the stakes could not be higher — life and death — the story meanders about halfway in and loses the strength it had built up.

Furthermore, in The Running Man, the host of the television show –played obnoxiously and brilliantly—by real game show host Richard Dawson, is the focus of Schwarzenegger’s revenge and that eventual showdown feels natural and satisfying when it comes. In “The Hunger Games”, Stanley Tucci and Wes Bentley play an announcer and “The Hunger Games” organizer, respectively, but they are the two hats Dawson wore in his one role—and Dawson did both better—and having two characters dilutes any power either can muster. Tucci is more engaging as a smarmy and saccharine version of Ryan Seacrest, but the inclusion of all these characters (including a brooding Donald Sutherland as the President of the government) leaves too much on the table and none are really resolved in any more than cursory fashion.

But our real interest and attention is with the children on the field (it’s actually a forest) of battle, and one of the reasons I preferred this to “Twilight” was that our heroine, Katniss, is truly heroic. In “Twilight,” Bella was a weak and passive character, always requiring the protection of others. In “The Hunger Games,” Katniss is a warrior, as good as Robin Hood with a bow and arrow, who uses strength, intelligence, and cunning to outlast all others. I really was rooting for her to win.

In all honesty, I simply might not get this movie. It’s an adventure for younger people, though I think you can enjoy it even if you are 30 and up. It appears as if it will be a box office and pop culture hit, but I’m not sure I found anything meaningful to hold onto in “The Hunger Games,” It’s a fast two hours, and if you don’t go in expecting too much you’ll most likely emerge hungry for more.