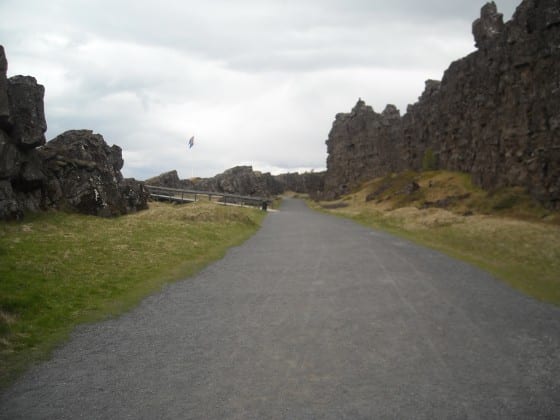 SELFOSS, Iceland — The two rock walls on either side of me towered up toward the sky. My Arizona roots have made me very familiar with mountains and rock walls, but these felt different. And, apparently, they were different.

“These walls are the edges of the American and the European continental plates,” Inga said, as she, her sister Bryndis and I walked between them. “It’s the only place in the world that isn’t under the ocean where you can stand between plates.”  I stopped in my tracks, feeling like someone punched me in the gut. Inga and Bryndis didn’t notice and kept walking.

Inga and I met while going to school in Scotland three years before, when we both were newly living in Glasgow and didn’t know a soul in the whole country. We were lucky enough to have been placed in the same flat, and we met my third day in the country. We have been best friends ever since.

I stared at Inga’s grey windbreaker and Bryndis’ blue one, becoming temporarily mesmerized with the colors. I lifted my arm, which was covered in a blue windbreaker matching Bryndis’, to push the hair out of my face. It was June, but it felt like an unseasonably cold winter day in Arizona.

Inga and Bryndis were way ahead of me, as I was stopping every few feet to snap another picture of the wall. I knew they thought it was cool, but they had been coming to this place since they were little. I wondered if the novelty had worn off for them.

For me, though, it felt like a magical place. To my right was the edge of the American plate; to my left, the European. I took a few deep breaths and looked to my left. Then to the right. And back to the left again. From my spot directly in between America and Europe I had a sinking realization that that spot—that exact area—was a more perfect metaphor for my life than I could ever make up on my own.

I expect to feel at home in Scotland. After the year of living there and the next two spent wishing I lived there, I know that I can always go and still feel like I belong. I never expected to feel so at home in Iceland, though. Even through the moments when I felt completely American–like having to shower in front of a locker room full of naked Icelandic women before going into the Blue Lagoon–I still felt strangely comfortable. Emphasis on strangely.

In my one week stay in the country, we traveled through some of the most amazing sights of natural beauty I have ever seen. Glacial waterfalls, leftover ash from the volcano, and hot springs are just a few of the natural wonders of this amazing country. Once, while driving up a two-lane highway (pretty much every highway in Iceland is only two lanes), we rode alongside a herd of horses running on the edge of the road. Grays blended into whites, which gave way to reds, and came back around to blacks. I made eye contact with a particularly beautiful silver-coated steed and I could have sworn he smiled at me. I had my camera in my hand, trying to capture the moment visually, while at the same time knowing that it wasn’t possible. The real beauty could only be experienced in person.

On my last night in the country, I lay in bed staring at the ceiling. I had an uneasy feeling in the pit of my stomach. I unknowingly exhaled loudly.

In the past three years, we’ve had this conversation many times, but the leaving never gets any easier. That’s what happens when you meet your best friend while studying in a country that is foreign to you both. When neither one of you stays in said country, even though you both want nothing else. When the only time you get to spend together is when one, or both, of you throws down a lot of money in order to meet up in another country.

“We just have to make a plan for the next time we’ll see each other,” she said quietly. I could tell by the tone of her voice that her eyes were also open.

“Yeah,” I agreed, half-heartedly. I thought back to the day when we stood between the continental plates. America and Europe. Right or left. Either or.

I turned onto my right side, facing the wall.  I knew that the sun was still shining behind the curtains, even though it was the middle of the night.