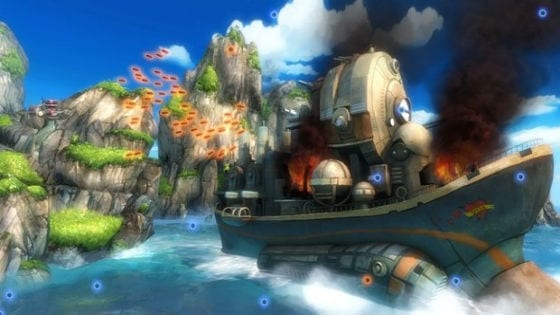 Developed by: Digital Reality, Grasshopper Manufacture
Published by: Microsoft Studios
Genre: Shoot-’em-up
Platform: Xbox Live Arcade
Play it if: You’re a fan of the genre. Ikaruga, anyone?
Skip it if: You’re not up for a challenge.
[rating:3/4]

Sine Mora, roughly translated from Latin, means “without delay.” It’s a stark warning as to what you’re getting into, with this frenetic shoot-’em-up brought to us via Grasshopper Manufacture. It’s quite a departure from the developer’s typically raunchy style — Killer7, Flower, Sun, and Rain, and No More Heroes to name a few.

But its calm exterior and svelte presentation belie a particularly menacing bullet hell shooter that’s a delightful mixture of dieselpunk sensibilities, intriguing mechanics, and time. While you usually face off against psychopathic assassins, bloodthirsty demons, or zombie rockers as in the case of the upcoming Lollipop Chainsaw, time’s the enemy in Sine Mora. Each time the timer ticks down closer to zero, you’re closer to death.

Across a tale that unfolds via text and brief expository scenes, you investigate strange time abominations and other anomalies brought forth via the unauthorized manipulation of time. It’s your job to fly through several expansive areas using three ships and seven different pilots to safety, setting things right along the way.

You’ll excavate undersea caverns teeming with mutant worms, power through a town terrorized by a shape-shifting train rife with missiles, rocket launchers, and various arms, and gun down the opposition in the unfriendly azure skies. All of this is tied directly to each stage’s timer, which acts as your life gauge.

Sustaining damage subracts from the timer, and destroying enemies adds precious seconds. Should the timer hit zero, it’s game over, leaving you to replay the section from the previous checkpoint or beginning of the area. Luckily, an array of power-ups and shields are up for grabs to keep you afloat.

Red and blue shields are available that protect each ship (three ships with unique sub-weapons) from the seemingly unstoppable onslaught of bullets heading your direction. If you’ve played through Ikaruga, you should have an inkling as to how the respective shields offer protection from energy blasts of the same color.

Should things become too dire and skillful dodging is no longer an option, you may manipulate time by pulling the right trigger. A type of “bullet-time,” restricted via refillable meter, allows you to shift through a torrential downpour of blasts. Strategic usage may just save your life, and depending on the difficulty, is an invaluable power-up.

The action is sustained well and swells up fantastically during the game’s seven stages, spanning several challenging boss encounters and a ranking system that provides an addictive challenge. Story and Arcade modes are both viable options for an afternoon’s worth of bullet hell fun, and higher difficulties propel the game into infamously frustrating territory — a great option for fans of the genre.

But it’s clear to see where Sine Mora truly excels. Combining lush, gorgeous imagery with a palette that absolutely pops and a score from Akira Yamaoka that simultaneously disturbs and enthralls was a design decision I can certainly get behind, and surmise will quickly become one of the game’s biggest selling points.

Certain landscapes such as the first stage’s verdant mountaintops and dazzling seas are so visually arresting you wish there were an opportunity to explore via land rather by air. It’s clear that this was a labor of love, both in terms of aesthetic and auricular appeal, and the usage of striking crimsons and sapphires against otherwise nondescript, arid environments is a bold move.

It’s a shame that this beautifully presented shooter is such a short ride, however, and its story can be less than engaging at times. But at its best, it’s perfectly capable of securing a spot at the top of your list of addictive schmups. Akira Yamaoka and Grasshopper Manufacture are a dream team, and Sine Mora is a fantastic diversion, even if it is a fleeting one.

The Blast Factor: It’s a shame that this beautifully presented shooter is such a short ride, however, and its story can be less than engaging at times. But at its best, it’s perfectly capable of securing a spot at the top of your list of addictive schmups. Akira Yamaoka and Grasshopper Manufacture are a dream team, and Sine Mora is a fantastic diversion, even if it is a fleeting one.