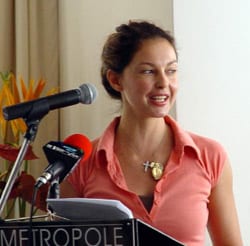 Rumors about Ashley Judd possibly partaking in plastic surgery emerged after the actress appeared on a talk show to promote her new show, Missing, with puffier cheeks than usual.

However, Judd and her rep have been quick to shut down the comments, her ep saying “Ashley has been battling an ongoing, serious sinus inflection and flu. [She’s] been on a heavy dose of medication to overcome it.”

Apparently, Judd was prescribed with steroids to battle the conidition that trigger the swelling in her cheeks.

Judd tweeted on Wednesday “Thanks to all asking how I’ve been feeling, still very sick (flu + viral infection in sinuses = wicked) but staying positive & having fun.”