If you accept that you’re watching a movie in which the funniest bit is watching Channing Tatum stick his tongue out when he’s stoned, then “21 Jump Street,” the comic re-boot of the 1980s television cop drama, is actually pretty awesome.

The absolute best thing this movie has going for it is the fact that it seems to be fully aware of itself. Directors Phil Lord and Chris Miller are content with a basic framework of a plot with a few twists on the normal formula, and two leads (Tatum and Jonah Hill) who do a workmanlike job of keeping us entertained for two hours.

The movie follows the basic story of the TV show: young-looking cops are sent in undercover into area high schools to investigate youth crime. There’s actually nothing all that memorable about the show; the only reason it’s stayed in the public consciousness was that it cast a young, unknown Johnny Depp in the lead role. 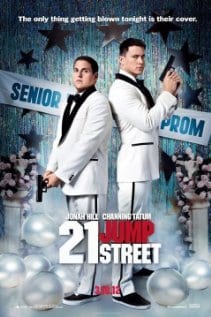 Writer Michael Bacall chooses to use the backdrop as a buddy comedy, and Tatum and Hill do a serviceable job as the two friends fresh out of police academy and sent to the 21 Jump Street program after they arrest a man without reading his Miranda Rights. Channing Tatum, as the lug head Jenko, has more comic timing than I’d thought to give him credit for; whether he simply received good direction or has improved himself is unclear, but he’s come a long way from stuttering his way through “She’s the Man.” He’s an excellent other half for a newly svelte Jonah Hill as Schmidt, and the two have a rapport that really crackles.

The rest of the movie is filled with little pleasant surprises. The two men roll into high school assuming that they will fall into the roles they played when they were teenagers (Jenko of course was the dumb jock, Schmidt- not so much). But high school has changed since the late 90s: suddenly Jenko’s gas-guzzling sports car and laziness is considered lame, while Schmidt’s quirkiness and newly-found confidence make him a star among the hipster classes. Finding themselves so clearly out of the element that defined them as teenagers is just as disconcerting, and even more difficult to navigate than the drug-ring they’re supposed to be investigating.

There’s a lot more that the movie could have done with the resources it had. A subplot involving Ellie Kemper as a teacher with an inappropriate crush on her “student” Jenko could have been a comic goldmine, but it’s abandoned halfway through. And the entire drug-ring plot deteriorates in a messy climactic prom scene that puts far too much focus on a cameos by Depp and former “Jump Street” co-star Peter DeLuise. But again, ignoring the giant plot holes you could drive a truck through and the inherent silliness of re-making “21 Jump Street” at all, this isn’t a terrible way to spend your hard-earned money.