Brothers Jay and Mark Duplass’s talent shines through their new film, “Jeff, Who Lives At Home.” And with the help of actors Jason Segal and Ed Helms, this film could very well put them on the map

To start off, the movie is just fun, but how can it not be, especially when you have actors like Segal and Helms, and even Susan Sarandon who is guilty of making it hard for the audience to suppress their laughter? There is nothing conventional about this film or the family in it, and that is why you can’t help but to fall in love with everything about it.

The film did have its moments where it seemed to be slow and drifting, but it was at that moment when something unforeseen takes place. It’s why the film was so successful; the directors always the audience wondering what could possibly be next. So I think it’s only proper to give credit where credit is due. Jay and Mark Duplass put together a great film.

“Jeff, Who lives at Home” starts off with Segal, who plays the very unique title character, recording his journal-esque thoughts. The movie begins with Jeff saying, “I watched ‘Signs’ again last night. It gets better every time you see it.” First of all, who still watches “Signs,” and second of all it was impossible to even attempt to take him serious since he was recollecting his thoughts while sitting on a toilet. And I don’t use unique too lightly for a 30-year-old stoner man with a free spirit personality and a residence in his mother’s basement. Jeff has this overbearing innocence to him that makes you want to punch his brother, Pat, played by Ed Helms, in the face whenever he makes a condescending comment. Rooting for Jeff from the beginning of the movie is completely unavoidable. 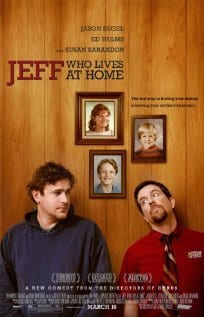 The story takes place in Baton Rouge, La. and begins when the mother (Sarandon) asks Jeff to go to the store to buy wood glue. This errand sends Jeff on a life changing experience that shows the audience how truly tragic each family member’s life is. Jeff is portrayed as this complete nobody, it’s as if the only thing he can do correctly is hit a bong without coughing up a right lung. His brother Pat has a lousy marriage that is deteriorating and he is way too clueless to even comprehend it. And their mother feels as if there is no purpose to her life at all. Yet, through all the chaos of the events that take place, you can’t help but want to make sure that Jeff is going to be okay.

Jeff is convinced that there are such things as destiny and fate, and throughout the film he is engrossed with trying to figure out if he is on the right path in achieving his. His bases his theory’s on the film by M. Night Shymalan, Signs. He thinks that there are all these signs pointing us to path of our lives. From beginning to end, it’s hard to not be envious of his free thinking and open mind.

There is no way that you will be able to predict the end of the movie, but one thing is for sure, it might encourage you to call up your sibling that you might be fighting with when the lights turn back on. If anything, Mark and Jay do a brilliant job of leaving you contemplating about the universe and how somehow, we might all be connected.