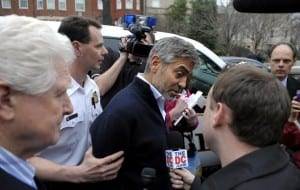 Actor George Clooney was arrested today at a protest outside of the Sudanese Embassy in Washington, DC.

Clooney and his father, Nick Clooney, joined other protesters accusing Sudanese President Omar of al-Bashir of provoking a humanitarian crisis and blocking food and aid.

Earlier this week, Clooney met with President Obama and testified in the Senate about the crisis in Sudan.

‘‘It’s such a silly thought to think you’re actually succeeding in any of this,’’ Clooney told “The Boston Globe.” ‘‘But if it’s loud enough and you keep making it loud enough at the very least people will know about it, and you can’t say we didn’t know. That’s the first step.’’