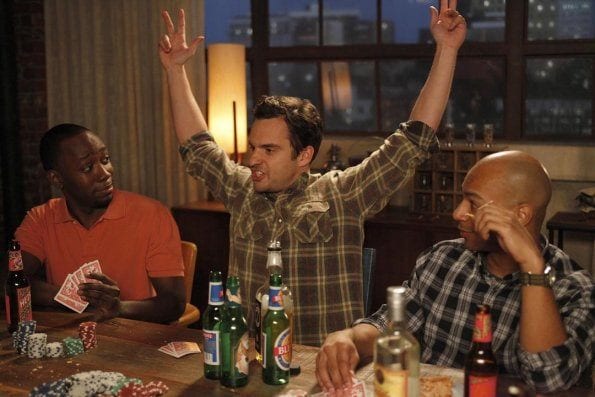 Nick incurs serious debt to Winston from a poker game, and Jess tries to get Schmidt to relax on "New Girl."

I suppose this is one of those “truth will set me free” moments. So it’s confessional time with all you surrogate Fathers (and Mothers?) As much as Schmidt makes my heart sing, last night’s episode showed he could not carry the show as the lead.

Do not misunderstand, he’s still the most consistent source of laughs. But often the most side-splitting character is as such because he the personification of his neuroses or quirks. “New Girl,” as it has started to add more shading and definition to its rough-sketch first season, is attempting to break Jess free from this one-note mold to strengthen her sustainability as the lead. But Schmidt as one of the surrounding ensemble can afford to be a messy amalgamation of douche and OCD tendencies.

So my proclamation above is not a concession. Quite to the contrary, I thought this episode justified Schmidt’s presence even more, however Schmidt is no anchor. Despite his status as “order incarnate” he serves the role of Chaos. Jess may be the rogue element that “messes with the delicate ecosystem,” but tonight’s and all proceeding episodes she is the glue that binds these four separately insufferable people together…as a singular mass of insufferableness, with a big ole heart.

Now if Jess’ role is as the general that rallies the troops that molds the boys into men, then what is Schmidt’s role as roommate? That question serves as the focal point of “Control,” which is answered in unison by Nick, Winston and Jess: “You’re the mom.”

At the onset, the two influential women in Schmidt’s present both make suggestions that he change who he is fundamentally. Cece, still ashamed by her late-night Schmidt cravings, continues to drop him off a distance away from the loft so their friends are none the wiser. And surprisingly, Schmidt doesn’t like being treated like some man for hire. As he vents: “I have no control (whoomp, there it is) and it’s stressing me out.” Though it’s important to note, his objections do not stem from the emotional distance. His douchey side can reconcile that since, I mean, why rock the boat when your current situation allows you to sleep with a sickeningly gorgeous model? But the lack of a consistent schedule, or any say in when he will be summoned, has the neat freak on edge. Cece simply scoffs and says, “We’re just being spontaneous, you need to relax.”

Then after walking a mile barefoot back to his place, Jess further incenses his sensibilities when she tries to install a new fixture: a pine hutch she found on the side of the road. Looking to regain the control that has stripped from him, he says the hutch has got to go. Dismayed because she has nothing outside of her bedroom that she has contributed to the space, Jess pushes back, ignoring the seasoned vets in Schmidtness, Nick and Winston, who warn her that she’ll rue her efforts.

The scene that follows may have yielded the most laughs for me because the physical pain in Schmidt’s expressions is hands-down hilarious, and, refreshingly, Jess’ reigned-in and calculated responses—like her sarcastic, poorly French-accented staging of the forbidden intermingling between Tahitian and non-Tahitian spices: “What’s it like living in the most populated island in French Polynesia?” “I could tell you, or, I could show you.” The power struggle escalates even more from there with Jess intentionally shelving Schmidt’s top-of-the-line coffee grinder—a conical one, so it actually grinds the beans instead of smashing them like some “pedestrian blade grinder”—in the hutch, inciting his rage. It ends with the hutch tipped over and the glass shattered on the floor and the admission that he may have a problem

Resolved to help Schmidt be more spontaneous, Jess takes him to the boardwalk. In an ingenious stroke of comedy and camerawork, as Jess details all the pleasant aspects of the beach (the birds, the wind, the ocean) we inhabit Schmidt’s point of view which can only focus on the rodents eating trash, the dirty needles lying on the ground, and the kite  that flies into his face. This causes him to stand his ground and preach the importance of structure in his life. Ignorant of his needs, Jess is resigned to her philosophy that he needs to loosen up. It was pleasant on a non-comedic level too, to see their two belief systems pitted against each other. They both share an adherence to particular world views, and it’s common in our world for such stringent beliefs to cause friction. Often sitcoms will just chalk it up to “personality clashes,” but its often more deeply engrained and proves to be a barrier in establishing any sort of harmony.

But as these situations tend to play out, Schmidt slowly takes steps toward letting go. He uses a public restroom, and when Nick spills some beer to test him, he’s able to count to ten and be serene. Winston and Nick immediately worry that Jess has awoken a sleeping giant. Or, in this case, a hygiene-deficient, drum circle-joining, street meat wrapped in street meat-eating freak. Since his new bohemian lifestyle translates to no cooking and cleaning for the other three, Jess realizes her grave error. As spoken by sage Nick Miller: “Being friends with Schmidt is really complicated. You wanna change him so badly, but you can’t. Because he’ll only get worse.”