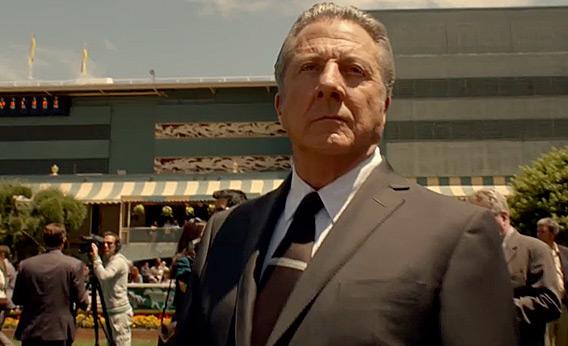 Even the mindful gangster Ace Bernstein (Dustin Hoffman) may not be ready for what lies on the horizon.

Amid some jovial moments with The Four Amigos (once just a bunch of degenerates, now the founding members of Foray Stables) and some romantic progress for Ace, Jerry and Escalante, first blood is drawn: Ace’s young hotshot, Nathan Israel, with his face flush to a crimson pool.

Noting Milch’s “waste not, want not” approach to cinematography, one must consider the shot shown immediately after the gruesome sight of Israel’s bashed-in cranium lying lifelessly on the floor of Mike’s (Michael Gambon) yacht: a flock of seagulls fleeing the scene. After the foreboding tremors of last week forced our friends to confront their choices and possibilities, this week illustrates that unlike the flock it won’t be so easy to escape themselves and their decisions, for those tied to the track.

Is there an inevitability (I sure hope you are compiling these in a study guide of some sort) to a universe ruled by luck? Many measures are taken to assert control, but nearly all of the folks we’ve come to know are at the mercy of another, or the fickle deities that are the gambling gods. Up until this point the boldness of rolling the dice had been rewarded, even if it lead some down the proverbial rabbit hole. Jerry was a few whiskers shy of rock bottom, Joey was just a few degrees of angled bullet away from the long goodbye, and Leon and Rosie both are either a couple pounds or flick of the stick away from obscurity. And that’s just a few kick-ups of the dust settling in the ominous air of Santa Anita.

For some there’s a tinge of hope shining through despite those gathering particles that try to block out any light. After a respite from the poker table, Jerry returns to the game with swagger, and he may just be indebted to his ragtag gang for that. But it’s his own strategies and maneuvers that win him a seat at the next phase for The World Series of Poker. Deserving some credit though is his secret partner in a tag team effort, Naomi, the dealer who witnessed his downward spiral against Leo. She might have scared the rest of the table off before they could maximize their score, but the end result is the same: a jackpot win and some parking lot sex between the victors. Jerry charms her with his down-to-earth request that she accompany him for a soda, “That’s what we call it where I’m from.”

As the previous quote indicates, this cliche calm-before-the-storm was not without some humor. Marcus delivers a humdinger: “Guy shows a little ass, and damn if a nightstick isn’t shoved up there and given a little twist,” and Lonnie and Renzo are catty critics of Jerry’s gorgeous new gal, “She didn’t say where she was from” and “She wore quite a bit of makeup.” Escalante also contributes a silly non sequitur after Ace installs a surveillance camera so he can keep an eye on Pint of Plain: “Watch my barn get put on the Facebook.”

Yet suffering seems to be the fate that will befall them all, and the tally of the afflicted started last night. In the first installment of the season’s final third, we realize that hot streaks end, and that there’s no certainty you’ll be ready for when the fires dies out. That interconnectedness that Milch and the crew have slowly been building, will crumble under the weight of the character’s different dependencies. Every one of them in one way or another is banking on someone else, scheming to ensure that structure will stand. And the beams have begun to sway ever so subtly.

Ace’s buffer has been removed, and for the first time he doesn’t anticipate this domino’s fall. He writes off the lack of a response from Nathan by surmising that he is getting laid by one of the many women on Mike’s boat. It’s not like him to dismiss. Could it be that Claire’s kindness has willed him into trusting? This vulnerability could bode well for their future as a couple, but there will be no “them” if Mike and his associates reclaim the leverage Ace spent countless dollars and hours solidifying. Before the bloodshed, he’s still the puppet master, manipulating their movements by feigning a meeting with the Indian casino knowing that Mike would hire a photographer to gather snapshot evidence, but the obliviousness about Israel maybe having been clipped at sea, is unsettling to say the least. As Ace’s all-seeing, but doughy eye looks upon Pint Of Plain, his gaze is diverted from the threat to all he has grown accustomed to and has cared about since his release.

The most God-fearing creatures are the slender jockeys. During pillow talk, Rosie concludes with Leon that she’ll use his sorta agent Joey as a proxy through which to gauge Walter’s feelings on giving her the mount in Gettin’ Up’s next race. Joey strong-arms her into “taking her book,” but then irritates Walter by showing his hand and making him feel rushed into a decision. Here’s where inevitability gets dicey. Was it Rosie’s initiative through Joey that eventually yields a “No” from Walter or was the ride Ronnie Jenkins’ to win or lose all along. Speak of the pill-crushing devil, Ronnie acts the part of a recovering addict well enough to convince Walter he can be trusted with Gettin’ Up’s mount, but in the final frames he succumbs to the beckoning of a bottle of Oxy and shamefully snorts them.

Lonnie, feeling like the fourth wheel of Foray Stables, decides on a business venture for himself: another Escalante horse in a claiming race. He figures this horses’s condition is for show, similar to the scenario that fell in their laps with Mon Gateau. But after launching out of the gate “like a rocketship,” Leon pulls up promptly when the horse starts to show signs of a hitch in her giddy up. Later proving to be a ruptured flexor tendon, Lonnie inherits a newly sidelined racehorse, but a still potentially profitable philly if he sends her off to a retirement farm to be a brood mare (she’ll spend her days breeding and birthing future champions). Ill-conceived from the onset, there’s an air about how it all played out that feels like self-fulfilling prophecy, and that outside of the bubble of Lonnie’s personal risk, maybe our quartet of degenerates don’t end up as fortunate. When you try to catch lightning in a bottle, isn’t it only a matter of time before it strikes you down?

Gloom casts its shadow over the radiant moments, such as Esclante’s warm receptiveness to fatherhood, through Mike’s remarks about syntax. When Mike’s seemingly irrational and savage beating occurs he justifies it with his frenzied cries of “Syntax!” By retorting the way he did, “Answered a question with another question,” Israel revealed to Mike that he stands in solidarity with Ace, and was not a double agent in the purest sense. Applied more broadly, this idea that oneself will be revealed eventually through what they’ve said or done would seem to harken back the old HBO adage, the one justifying their notoriously slow-burning dramas: all the pieces matter. Could Ace’s skepticism that he shares at the thoroughbred retirement farm, about inmates’ being rehabilitated by caring for a horse, “They’re still in custody” be confirmed? Are people bound to who they are?

If one is to redeem themselves, they have to test their will. Escalante tests his will by showing Jo he can be selfless and puts the needs of another before his by bringing Eduardo home to his abandoning uncle. Walter in his soulful struggle to avenge Delphi’s murder through his foal decides that Ronnie will be the better fit to take Gettin’ Up to the promiseland. And Jerry faces his gambling woes head on by thrusting himself into high stakes competition. Faith that high risk will reap high rewards seems to be the religion of our track-goers, and we cringe knowing that men have died over faith before. When Mike smacks Israel upside his temple with a glass dish, he not only (allegedly) takes his life, but he challenges our hope that those who deserve to win, will.

With all that subtext smashing in our own skulls, in addition to the brimming pot of plot boiling over, this episode felt awkwardly insisting where subtlety and simplicity has previously prevailed. I’d imagine the outright exposition and influx of events was essential considering we’re approaching the penultimate episode; HBO shows tends to drop bombs during the week that proceeds the finale, which deals with the fallout. That clunkiness can be mostly forgiven though, because the overwhelming feeling is that we’re going to be broadsided soon, and the merciful Milch was kind enough to allow us time to brace ourselves. But for providing several restorative moments that contrast the gruesome and bleak possibilities of retribution and relapse that might await our pals, leading us into the last two episodes looking over our shoulders, the “Brains Housing Department” deserves to be rewarded for their risks, for their own entrance into the world of high-stakes television: A-.