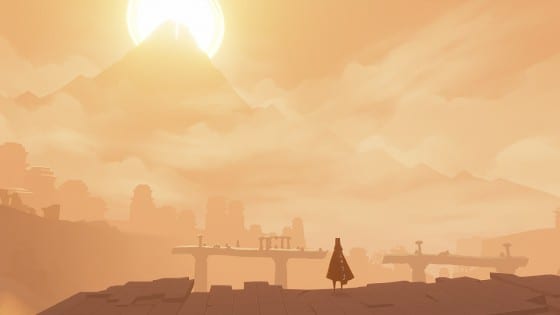 Developed by: That Game Company
Published by: Sony
Genre: Action Adventure
Platform: PSN
Play it if: You’re looking for something different
Skip it if: You’d rather shoot stuff
[rating:3.5/4]

By now we’ve all heard Roger Ebert’s thoughts on how games can’t be art. We’ve heard him talk about how even in this age, games will never be able to have the emotional impact that films do.I’m not going to sit here and list all of the reasons I disagree with him, or argue in any manner because I really don’t need to.

I’m just going to put it out there — Journey makes as strong of an argument against Ebert that you could ever need. It may not be for everyone, but like the best art house movies, it tells a remarkable tale in a manner that’s sure to break down barriers and be one of those games that you’re going to remember for quite some time.

Journey is the latest project by That Game Company, the studio that brought us the similarly artistic Flower. Journey places players in the role of a nameless robed figure on a quest to get to a mountain in the distance. It may sound like a simple task, but Journey takes you through almost every environment across the globe. You’ll start in the dessert, but go everywhere you could imagine in your quest. You can gain help from other players online in your playthrough of Journey — but you won’t be able to communicate with each other, nor will you even know their names.

That’s the key to what makes Journey so special — it forces you to rethink just how you play games. You come across these other robed figures and you have no idea who they are, and you’re often times forced to play with people you’ve never met before, and will likely never see again. When you do come across someone you’ve played with before (players have identifying symbols on their robes), it’s quite the experience, as it is when you’re able to help someone without the use of words or hints.

Though it has no dialogue and no traditional character development, Journey tells its story better than most modern AAA games. Throughout Journey, you’ll cheer as your character takes flight, you’ll wince as your character stumbles and you’ll feel real emotion as you say goodbye to some of the friends you’ve made, but can’t go on with you in your journey. There’s a very large level of emotional attachment in Journey, and That Game Company does a great job in taking a minimalist approach to making you connect with it’s world and characters.

What’s most endearing about Journey is just how far the little things go in making it a great and unforgettable experience. The game is filled with fantastic vistas that rival that of the best AAA games on the system, but it’s the little touches that go the furthest. Players communicate with in Journey only through a small musical shout which always stays in tune with the background music in the game. The sheer brilliance of a game like Journey is found in the weather effects, and the simple joy you’ll get when you are doing such trivial things that end up playing a huge role in the outcome of the game.

The Blast Factor: A lot of people are going to give Journey a try, and some are going to downright hate it. They’ll find it boring and lackluster. They’ll find nothing to do, but digging deeper and staying with the title will result in one of the most moving experiences you’ll have with a game. Journey tells a story, and it tells it like no other.Journey is one of those games that challenges what the medium can do, and hopefully the world will take notice.