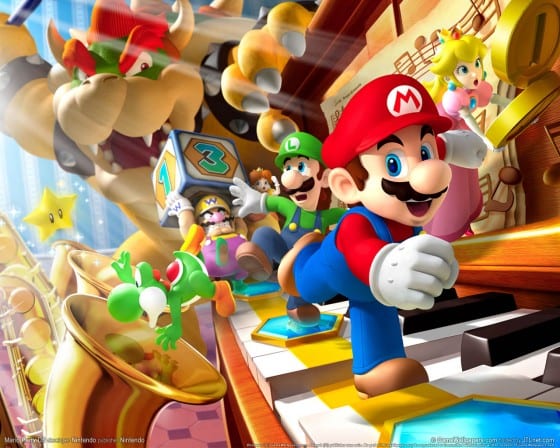 Developed by:Nd Cube Co
Published by:Nintendo
Genre: Party
Platform: Wii
Play it if: You have friends nearby
Skip it if: You’re a hermit
[rating:2.5/4]

For over a decade, the Mario Party franchise has been delivering quintessential party games that continue its familiar twist on the traditional board game experience. Each game has given players new worlds, mini-games, and characters to choose from, but none has truly changed the way you play it – until now. Your fate might still depend on the roll of the dice, but Mario Party 9 is a refreshingly different type of party.

As always, Bowser has come up with some plan to suck up all the stars in the sky, so it’s Mario and company’s job to get them back. Instead of taking turns and individually moving across each game board, however, you and your friends will ride together on a giant vehicle along a path to the finish line. Each map has various themed challenges, spaces, and events for you to encounter. Despite traveling together, this is still a competition, and the player with the most number of mini-stars by the end of the journey wins.

This new joint travel system eliminates Mario Party’s classic items and booby traps, but it adds a new type of strategy too. Each turn lets your character be the captain of the vessel, putting him in charge of rolling the dice and letting him pick up any mini-stars scattered across the board. Of course, your turn can also lead you into danger, but various numbered dice let you sabotage your opponent’s next turn if you plan ahead and play the game wisely –that is, if you have any special dice. You can only get these items when you land on spaces randomly because, well, Mario Party still isn’t as strategic a game as it could be. As in past titles, the unpredictability and the randomness of the dice can still change the entire outcome of a game in one turn. Land on a Bowser space, and half your mini-stars can be gone in an instant. It’s not a pretty sight, but sometimes the odds won’t be in your favor.

Each game board is divided into two parts, with a mini-boss in the middle and a boss battle at the end. These battles are essentially extended mini-games, but their dramatic presentation and the classic cast of Mario bosses you’ll face add to their uniqueness. While you will always have to face a boss, actually getting to play one of the 80 new mini-games may never happen as you need to land on mini-game spaces to play them. While some of these mini-games, such as flipping cards or selecting correct fishing lines, will depend on luck, most will thankfully require skill tapping the Wii remote’s face button rather than gimmicky motion controls.

As its name suggests, Mario Party is meant to be played with a group of people, preferably, a party of four. While you can individually set your AI opponents’ difficulty and handicap, playing against a group of three computers is not as fun as playing with friends or family. In fact, if you remove other people from the experience, what you’re left with is a frustrating and seemingly unfair game that will test your patience with each roll of the dice. Plus, its lack of an online mode severely limits its replayability if you play it alone. Should you tackle Solo mode, which is essentially the game’s single player story mode, you might question your sanity every time you to don’t win.

I was pleasantly surprised Mario Party 9 does a much better job of incorporating classic Mario sounds and characters than its predecessors did. Battling Spike from Super Mario Bros. 3, for example, while listening to an arranged version of the Hammer Bros. theme song just feels good. Other nice touches involve the charming details in mini-games and in the various themed maps. Still, these graphics are mediocre at best but suit the playful nature of the series just fine. At least some of its soundtrack is catchier, albeit just as repetitive, than before.

If you do play it with a group of friends, however, Mario Party 9 is a blast. Aside from its Free Play option that lets you play any mini-game whenever you want, there is also a set of longer mini-games that are surprisingly robust. Goomba Bowling won’t put Wii Sports to shame, but it’s just as fun. The real gem, though, is an addictive two-player puzzle game that can take up to an hour to finish. Each time you finish a game board or play a mini-game, you also get special points that can be used to purchase more content such as a new map, vehicles, and music, so you have some incentive to keep at it.

The Blast Factor: You can spend a few hours playing the game by yourself and unlocking a couple of new characters, but there’s nothing else for you to do unless you have company. Another single player mode lets you play a handful of mini-games from a different camera angle, but once you finish these off, there is really no point in playing them again. Hopefully you’re buying Mario Party 9 and bringing it home to a full house. Otherwise, your fun will end when you land on a Bowser space three times in a row.