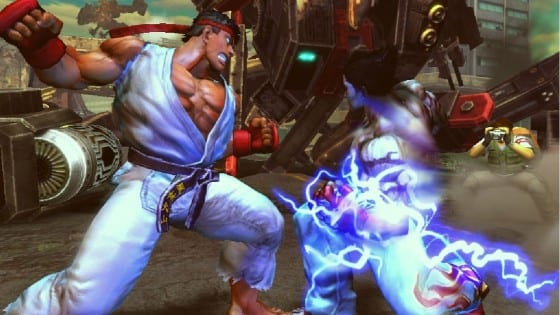 Late in 2001, DC Comics teamed up with Stan Lee, the legendary co-creator of such Marvel heroes as Spider-man, The Incredible Hulk and Captain America to do a series of comics where Lee created his own version of the famed DC heroes. The “Just Imagine..” line was supposed to be a cross between what’s great about both comic companies — it wasn’t. Superman was an alien cop who couldn’t hack it on his home planet, Wonder Woman was a hipster activist, Batman was a pro wrestler and Aquaman was a sketchy guy who mixed his DNA with that of a dolphin — no, really.

Why do I bring up a comic book from over ten years ago that I would much rather forget? Playing through Street fighter X Tekken, the new crossover fighter from Capcom — I got the same feeling. The differences may not be as striking as Lee’s creations, but it comes off as much more of a “What if Yoshihiro Ono (the man behind Street Fighter IV) created Tekken” rather than a celebration of the two long running fighting franchises — and that’s okay because of the eventual Tekken X Street Fighter that’s been announced putting the creative duties in the hands of Capcom, but one has to wonder — is it enough?

If you’ve played any of Capcom’s recent fighting games, Street Fighter X Tekken is sure to look incredibly familiar, it follows the same visual style of Street Fighter IV and the same basic mechanics as the Marvel VS Capcom series. There are a few differences here, like how you’ll play as a team of two rather than three, but the idea remains the same; play as a team of fighters from either one franchise or the other and brawl your way through a ladder of opponents. This is a development team and franchise that knows it’s bread and butter and pulls it off well. Flashy combos, intricate combo maneuvers and quick tags are the name of the Street Fighter X Tekken game, and fans are sure to gobble it up.

One of the game’s biggest strength’s lies in the sheer amount of characters that are playable from the start. Both sides of the conflict are well represented here, with Street fighter legends like Ryu, Ken, Chun Li and Guile making appearances and fighters like Kazuya, King and Kuma (Bear Fight!) appearing for Tekken. I did enjoy the amount of second tier characters that made the cut, like Kuro the cat from Tekken.

The arcade mode of Street Fighter X Tekken serves as the game’s story mode, and I use that term in the loosest of terms. There’s a mysterious object crashing to Earth and both sides want it because it’s got powers. Don’t pay much attention to that vague description, as the game does even less to develop the plot. It serves merely as a jumping off point to get you to fighting — which is what you’re here for anyways.

I’m always amazed that more fighting games haven’t stolen directly from the latest Mortal Kombat title and it’s stellar story mode. Rather, at the start of the story you’ll get a non moving, slightly animated animation, and in between the fights, you’re going to have banter between both sides, but that’s about it. I did appreciate that the majority of the fighters have a reason to be teaming together, and it’s not a random two players. But can someone please explain why Capcom made some of the non Japanese fighters speak English, but characters like Guile from America and Vega from Spain still speak Japanese?

Street Fighter X Tekken does a great job of catering to it’s core fan base, while still remaining extremely accessible for new players thanks to a great degree of customization options. There’s the new gem system that allows players to divide up skill points to their fighters to help beef up their strengths. There’s also a number of cool one touch controls that allow newer users to become more familiar with move sets.

A lot of players are going to go into Street Fighter X Tekken looking to play online — but they’re going to be severely disappointed, as though the game does feature a pretty robust and dedicated online suite, the reliability of the connection speed are less than impressive. You’ll get a ton of match requests, but you’d both better have stellar connections, or the game is most likely to be dropped. Hopefully Capcom can fix it before long.

The Blast Factor: For all that it does wrong, Street Fighter X Tekken is still a lot of fun to play with some buddies on the couch and spend an afternoon duking it out. The engine may be starting to show it’s age, but it still works well when it needs to, and it still knows just what it’s fans want. Now let’s just see what Namco can do with the Street Fighter characters later this year.