Journey, like its name states, gives each person that plays it a unique experience unlike any other. Play it alone, and you’ll enter a world of wonder and awe that is as poignant as it is beautiful. Play it online with a stranger, and you might consider the game to be a parable of life.

Recently I had the opportunity to sit in on a conference call with Jenova Chen, co-founder of thatgamecompany and creative director for Journey, who shared with us his thoughts on games and what makes Journey so memorable.

After working on games like Flow and Flower, Chen approached Journey as a gradual progression of how his company makes games. “Our philosophy is that we want to push the boundaries of what a video game can communicate at the emotional spectrum,” says Chen. ”We want to bring new feelings to the audience.” His past games have focused on accessibility and intuitive controls while providing a universal emotional appeal. Journey is no different.

The online multiplayer component that was missing from his past games is actually what inspired much of Journey’s creation. Chen wanted to provide a new emotional experience for two strangers who meet over the internet. Chen comments that even if multiple people can go online to play with each other, a console game’s multiplayer will be based on its single player mechanics that tend to give players ultimate power and usually involve killing something or each other.

“Most single player games are about empowerment, but when both people feel powerful, it’s less likely they will connect or socialize,” says Chen. “In most of the console games, when people see each other, they are thinking about how to execute whatever their power is on each other. Rather than focusing on how I’m supposed to use my power on the other guy, we wanted [Journey] to focus on the experience of ‘Hey! There is another human being! I haven’t seen another human being for a while. I really want to go and talk to him.’”

Chen says Journey will feel more social than any other social game out there, and once you play it with someone else, you’ll understand why. The game takes place in a vast desert, and its simplistic art style was necessary to remove distractions while emphasizing the importance of coexisting with others.

Of course, you can choose to play Journey by yourself, but because Journey is designed to mimic life and our journey towards an inevitable death, Chen says each play-through will feel different as we might meet different people along the way. “It’s very much trying to be as true to our life as possible. If you have a Journey experience where you are playing as single player from the beginning to the end, it’s very much like self-reflection. But if you meet anyone during Journey, it will be very, very engaging. It’s almost changing the game to a completely different experience.”

Despite being very socially engaging, Journey doesn’t let players talk to one another or communicate in ways we are used to. Chen really wanted two players to bond together after putting them through challenges and struggles – but that alone wasn’t enough. He wanted people to go through a whole transformation with other players. “In order [to do that] you need to fully immerse them,” says Chen while explaining his decision to omit players’ PSN names from showing up in the game and removing any form of texting or messaging. “Characters in game are not supposed to speak human language, so just seeing the text from the human world is taking you away from this exotic place we created…they all become distractions of what the game is really about. All you need to know is that the other person is a human.” 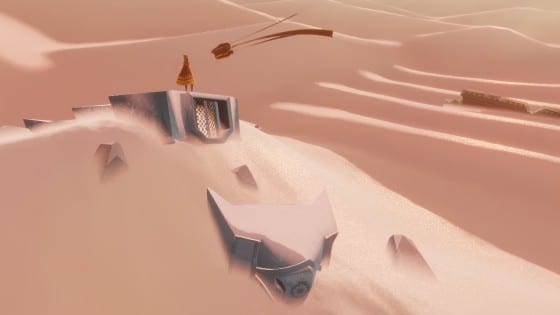 Journey’s simple interface not only prevents distraction, but it also minimizes instruction and guidance, leaving you alone to figure out what you must do, and thus, giving you a sense of wonder. “Telling all the information to you, you’re taking away that sense of wonder,” says Chen. “In Journey, particularly, we want to avoid ruining that for you. We would rather like the players themselves to discover everything.”

Most people who play Journey will finish the game within two hours, but Chen doesn’t care if you think the game is too short as long as it did its job. “Our goal is to communicate emotion. We want to entertain people. We want to inspire people. We want to bring a strong emotional catharsis to the player. We know all the traditional tricks to extend a game, but if our goal is to communicate a strong feeling or a message, I feel we are responsible to doing it in the most efficient way possible. We don’t want to add any filler experience because people are paying money to experience that, and if we give them fillers, this is a disrespect.”

“Games are for everybody,” Chen says, “and in order to make them accessible to everybody, you have to design the interface to be more intuitive.” It makes sense when you buy a game for a kid to want it to entertain him for hours. But the games he makes aren’t just for kids. Chen understands adults are busy, so his games need to be able to move them enough to justify spending hours in front of a screen.

“I came from film school, so we learned all the basics about creating emotion through narrative, and in order to create very strong emotion, we need time. The problem with a game that is longer than three hours is then there is a bathroom break. The reason films are designed between 90 minutes and two hours is so that people can take the whole thing in and really build up to a climactic feeling. So, two hours is golden time before they have to go to the bathroom.” Most people will play the game in one sitting, Chen says, but Journey is an online game, so he imagines players will play the game at least three times.

When designing a game, Chen also considers what will make it worthwhile for an adult to play. “We grew up with the teenager games, and the empowerment was awesome. But, now you’re in charge of your life. You’re a professional. You have the power already. And so people are looking for something that offers more relevance to their life. [How] is a skill of a headshot going to help you in real life?”

Getting down to the heart of it all, Journey is essentially a journey of life that truly captures Chen’s vision. The game starts you off in a desert, like a baby who doesn’t know anything, and as you progress through the game, you mature. Each person will have a different experience playing Journey, but that’s what makes it so special.

Journey is available this Tuesday on PSN for $14.99. Watch for the review soon.