Peter Molyneux, the legendary video game creator behind such games as the Fable series has announced that he will leave Microsoft and Lionhead Studios. 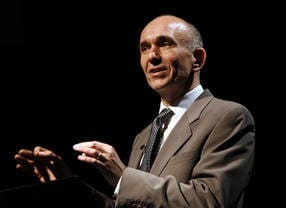 He will finish his current project, the Kinect enabled Fable: The Journey as revealed at last year’s E3.

“It is with mixed emotions that I made the decision to leave Microsoft and Lionhead Studios, the company that I co-founded in 1997, at the conclusion of development ofFable: The Journey.,” Molyneux said in a statement issued to Kotaku this morning. “I remain extremely passionate and proud of the people, products and experiences that we created,” Molyneux said, “from Black & White toFable to our pioneering work with Milo and Katefor the Kinect platform. However, I felt the time was right to pursue a new independent venture. I’d like to thank the team at Lionhead, as well as our partners at Microsoft Studios for their support, dedication and incredible work over the years.”

Molyneux has since revealed that his new independent project will be called “22 Cans.”