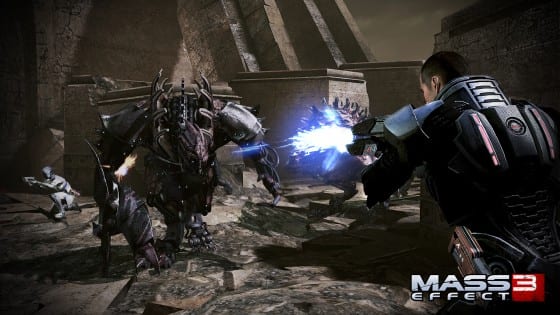 BOSTON – Mass Effect 3, the most anticipated game of the year so far, has been showered with praise and hype in the weeks leading up to its launch. While many retailers prepared massive midnight launch parties, fans in the Boston area were treated to a unique experience, get to meet two of the developers who worked on the game.

“It’s always a spectacle, a culmination of the hype,” said Nick Clifford, Product Manager for Mass Effect 3. “We are sending developers to different stores and doing live streams in Boston, Chicago and Los Angeles.”

Bioware set up their Boston headquarters at the Downtown Crossing Gamestop. Word spread throughout the night as fans crowded the store in anticipation for the title. Many of them were not even going to pick up the game at the store; they were simply lining up to get something signed by the developers.

“The plan for the midnight launch has always been changing,” said Eduardo Vasconcellos, Community Manager for Bioware, “We have been scrambling to adjust. At one point we had Foo Fighters in the plan.”

Despite the lack of a major record artist, hundreds of fans lined up on a chilly New England night to meet what many considered their heroes. The developers were signing anything from the game box, to strategy guides, to copies of other games.

“We are really eager about fan’s reactions,” said Clifford “The benefit of a midnight launch is that is lets us pay attention to all lines of communication the moment players get their hands on the game.”

“[It’s] all about the fans. We are here to make them happy,” said Vasconcellos. “Without fans, there is no game.”