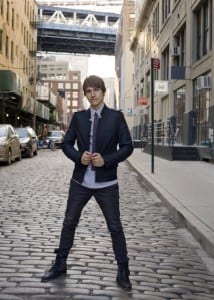 Rising music artist, Simon Spire is celebrating the recent release of his new EP “No Solid Ground.” The New Zealand native released this five-song EP on January 31 to give listeners a taste of what is to come in his album “Four-Letter Words,” tentatively being released this summer.

The song “Liberate Your Love” was a success in 2011 and will be the album’s lead single. Spire felt it was a little nerve-racking to have his music critiqued by the public, but ultimately a very exciting experience. “I am grateful that people have been listening and responding to it. I hope to get it out to more people,” he says.

When he first came to the US, Simon lived in various places such as Los Angeles, Washington and Arizona with an artist development organization fine-tuning his artistic sound. Finally he settled in New York and has been residing there for the past four years, writing and spreading his music. Recently, Spire has been hard at work in recording studios preparing this album teaser.

Some fans wondered why Spire only released a small portion of the album. “I think part of it is to build momentum gradually rather than releasing the album too early,” says Spire. He went on to say that the album is still not completely finished. More mixing is still being done in order to give fans the best album possible.

Many have commented on the style of Spire’s music calling it a combination of indie and pop or just alternative. “Self-inquiring indie pop” is how he likes to describe his music. “It’s buoyant in the beat, but there are more spacious and somber songs. The emphasis is not on being edgy,” says Spire.

This anticipated album would never have been possible were it not for Simon’s introduction to music at a young age. Spire’s first instrument was the piano where he was classically trained. But he first became “obsessed” with music at age 13 when he heard one of his fellow classmates’ acoustic performance of Nirvana’s “Come as You Are.” 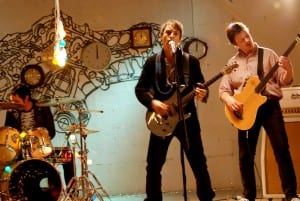 From that point on he realized there was so much more he could do with music. “I find that everything I need to do I can do with a guitar,” says Spire. Later on in his teen years he took on the challenge of song writing.

As a songwriter Spire has defined himself by placing ongoing themes behind his music. These themes bring about a deeper meaning in contrast to any other typical artist’s songs. Spire delves into themes like self-inquiry, journeys of discovery and challenges in our lives.

“People as a species and individuals are under a lot of pressure to fully embrace our potential and take risks,” says Spire about incorporating these themes. “I’m talking about the capacity of individuals to transform and move beyond our limitations.”

He makes a point to look inward at his own personal journeys and transformations to find inspiration. Writing a new song is a very reflective process for Spire. “I like best when I’m first writing a song. I get a sense of what it’s about, but by the end of the song I have a different perspective on the topic,” he says.

Spire is also a believer in a holistic approach to his diet and looks to the tranquility of meditation for balance. Spire says this allows him to connect to the core of who he is, which fuels his music.

The passion that Spire feels toward his music is something he hopes can translate into the lives of his fans. “For me, my favorite music has always revealed something about me to myself. I hope [my music] inspires [people] or awakens parts of them they didn’t know about.”