Search
Home
EntertainmentMoviesReviews
[rating:2/4]
Pretty much the second I walked out of the theater after viewing the screening of “Wanderlust” I realized I didn’t really have anything to say about it.

This of course does not mean the movie is bad, at least not in the conventional meaning- if it had been, I would have had a lot more to say. Rather it seems so faint, and so relentlessly inoffensive in its execution, I cannot find anything remarkable to say.

This is odd for an R-rated film, which features lots of discussions of free love, jokes about pooping in front of other people, and pretty unbelievable amounts of nudity. Said hijinks ensue when a married couple (Paul Rudd and Jennifer Aniston) lose their Manhattan jobs and, unable to pay their mortgage, decide on a whim to join a commune in Georgia. But hijinks aside, this is a pretty tame movie, gently poking both those who drink the alternative lifestyle kool-aid and those who prefer air conditioning.

Rudd and Aniston are pretty much who they’re supposed to be- an intensely likable couple, with a normal couple’s cares and woes. Even when the debate about whether or not they should stay at the commune permanently threatens their relationship, the fight that ensues doesn’t seem any worse than one about who did the dishes the night before, or who paid the electric bill late. Neither of them does anything spectacular- the exception being a hilarious scene where Rudd talks dirty to himself in the mirror in an effort to try to psyche himself up for a free love session with one of the other women at the commune (he ends up sounding like one of the “Deliverance” hillbillies and it’s just as disgusting as you can imagine.) 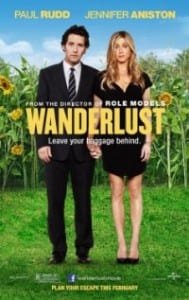 Among the third-billed, Justin Theroux is pretty good as the commune’s de-facto leader and Kathryn Hahn is excellent reprising her aggressive hippie character from “Our Idiot Brother”. And in another, better movie, Ken Marino could be one of the great comic villains, playing Rudd’s heinous Atlanta yuppie brother.

Hey, speaking of “Our Idiot Brother”- you should see that instead. Not only does it include Rudd as the wacky character instead of the straight man (always better in my opinion), it has a lot more to say about those who reject the social norm, and the mixture of derision, jealousy and grudging admiration the rest of us have for them. “Wanderlust” was a decent 90 minutes. It’s just 90 minutes I most likely won’t remember next week.