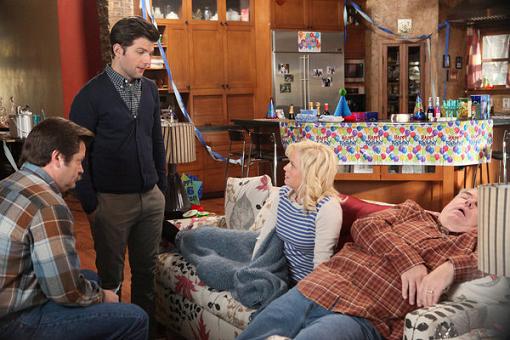 Subtlety can often be pretentious, but there is a reason why minutia matters.

As a writing student, I know much of the whining in workshops is oriented around how “obvious” the story is. Well, also “how well we know the main character,” but the people of Pawnee have been fleshed out for a while. “Obvious” can mean predictable, manipulative, or even bland, but it’s the perception of an overt effort to “make a point” that’s the faux pas in literary circles. The consensus is that one must write with a question in mind, not an answer.

But as CBS (and the other networks, but CBS serves as the exemplar) has suggested for decades, people like routine. Sitcoms and procedural dramas are characterized by their formulaic structure and cathartic endings. When you sit down in front of the tube on any given weeknight you’re sure that you will walk away satisfied because you found out who the killer was, or because the children learned their lesson. In literature, this is lazy; it’s understood that each story should be evaluated as an opportunity to cut a fresh slice out of life. Now, I can’t be sure that if I sneakily submitted a “Parks and Rec” script as my next draft folks would fully embrace it, but I believe the show does embrace the core of why subtlety is championed. When a message is explicitly conveyed it doesn’t allow for a range of interactions with the “text.” Nuance and finesse, however, can allow for a spectrum of reactions.

This is wherein comedy can achieve excellence. Laughs, although discriminatory, are easy. They are reflexes, engrained in us unconsciously, and often we immediately regret or find shame in what we laugh at. But when one is reduced to a coughing fit, or any other ostentatious displays like knee-slapping, clapping, snorting, that’s a genuine expression of connectivity to the art. That’s not something you can churn out every week through some kind of chuckles equation. It takes care and dedication, and when I notice the “Parks” writers employing such details with confidence, you know you’ve been struck by a story thats worth telling, and yet shows merit simply in how it’s told.

That said, Sweet Sixteen wasn’t the strongest or the most memorable episode, but it’s one of many exceptionally executed chapters in a masterpiece work. As mentioned up top, the minutia mattered this week. Like when Andy answered that 64 divided by four is 64 while everyone else blurted out 16. Or when Ron asked Donna if this was all the eggs she had, and when she asked what he was making he replied, “Eggs.” Or how about a classic “What the f**k” delivered by Andy when Chris popped up to give him more tips in canine care. The list goes on, and not even the L.O.L.Ls section could adequately house the prolific amount of details that all served comedic purpose.

The plot tonight, much like that of Operation Ann, is highly unoriginal and so recycled it’s eco-friendly. Leslie is frazzled, but it’s never just that. She’s a catalyst for situations that bring out the eccentricities of them all. This time she’s overworking herself clocking 50 hours at the Parks Department, 50 for her campaign and still finding time to volunteer for Wheels for Meals on Wheels (they repair vans for Meals on Wheels). Ron insists she take a sabbatical, but her tireless work ethic is at odds with her biological need to slow down. As a result, she has become uncharacteristically negligent. Her most recent slip-up being that she forgot Jerry’s birthday. Another stellar detail: Jerry’s birthday is February 29. How perfect? The most undervalued worker gets a celebration only ever four years, brilliant. As her atonement, Leslie resolves to throw him a surprise “Sweet Sixteen” party at Donna’s lake house. But in her rush to make amends, she forgets to invite Jerry, only serving to stroke Ron’s ego as he anticipates her downfall.

After Tom bought himself some time to woo her last week, Ann briefly becomes the object of Tom’s disdain. She violates number three of his “Oh No Nos” list, a lack of appreciation for 90s R&B, when she is unfamiliar with Donna’s cousin and recording artist, Ginuwine (I remember him in the 2000s as the crooner who released the single, “In Those Jeans,” an ode to curvy women who leave little to the imagination when they squeeze into tight denim). Tom then worries that she may be utterly repulsive to him aside from her stunning beauty. Through relentless questioning he uncovers disturbing disagreements between them, forcing Ann to rattle of her own list (from which I will draw upon some L.O.L.Ls below). Caught in the middle is April, who “inadvertently” set them up two episodes ago. Due to that kindness, she’s now forced to endure their incessant complaints. To dull her agony she drowns herself in champagne, adding Aubrey Plaza to the list of “Parks” actors with an aptitude for acting drunk.

Everyone’s favorite thrice-appendaged doggy Champion is the subject of the last subplot. Chris, still reeling from Millicent, is desperate for companionship. And when Andy asks him to watch Champion for a night they bond instantly. As expected, the microchip expertise that knows no bounds extends to dog training, and using German commands has made Champion into a…well…do I have to say it? Andy’s first response is jealousy. His German gibberish when attempting to make Champion perform for him too is hilarious. After losing Champion while trying to prove he didn’t need a leash, he earnestly relays his insecurities to Chris, who assures him that the love he provides is perfectly adequate. Chris then suggests he sing to corral the dog, and when Champion returns shows the camera the dog whistle he uses to actually coax him out. It’s a tender act that further defines Chris. Before he was just a comical exaggeration of self-determination and optimism, but amidst his misery, he has shone truthfully as a beacon of selflessness and friendship these past few weeks.

The three payoffs were unified in the superb exhibitions of ” their best selves” by those who served as crutches for their normally self-sufficient friends. Ron Swanson, for instance, offered his pearl of wisdom: “Never half-ass two things, whole-ass one thing.” Not exactly eloquent, but it’s a honest appeal to Leslie that if she really wants to be a councilwoman she needs to make sacrifices, reductions to her workload. They shake on an agreement to ten hours at P&R, and the rest of her time will be allotted to the pursuit of her dream, becoming an elected official.

Tom and Ann transforms into Tann, then Haverkins (Haverford + Perkinds), when April’s drunken admission that they were fighting over pointless topics jolted them both, making them realize that they were fishing for something wrong when they should have just be enjoying each other’s company. It was pleasant as always to see April, however reluctantly, help out the people she cares for and hates in the same breath. She’s a conundrum, but one you wish was by your side and in your life.

Andy also brings joy to another by encouraging a relationship, giving Chris permission to hang with Champion whenever he likes. The brief moment where April touches Andy’s hand, again using an extremely minor maneuver, sealed the deal. There is not only love between them, but more than tenuous bonds between all of the Parks Department team. Like with Tom and Ann, it might be easier to point out the flaws. Like with Ron and Leslie it may take time for a proper mentor/mentee dynamic to flourish; and like with Andy and Chris it may involve opening yourself up when you’d rather give off your more invulnerable self. But when Leslie, “Tann,” and Chris needed that Al-Green-esque shoulder when they weren’t strong, they answered the call.

Projecting a bit, I’m still worried about “The Haverkins situation,” but it’s an enigmatic kind of worry: my concern is that it’s harmless. Leslie’s campaign is a palpable source of tension and a well of comedic scenarios. Haverkins comes off as a fling would, inconsequential. But “Parks” doesn’t operate with the safety valve of a reset button, and everything that occurs before affects our characters going forward. While Tom and Ann’s prospects of finding love don’t have the potential to shake up the series like Leslie’s election could, it might disturb the balance of absurdity and realism that the show has so rightly earned. The episode itself was innocuous too in many ways, a detour from more pressing affairs, but due to the ways it showcased the better attributes of favorites like Ron and Andy, it’s nearly impossible to diminish my level of enjoyment. For an escape to the lake house filled with equal parts bonding and shenanigans, and prioritizing the minuscule so that it might balloon in the eyes of each viewer, I raise a glass to Jerry’s 64th birthday and to a B+ episode of the most gratifying show on television. Cheers!

– “Let’s start a pool. Who wants retired and who wants dead?”

– Ron on Leslie’s belief that he will later “eat crow”: “Leslie’s the best and I’m stupid.” “That does sound like me…”

– Oh No Nos or Things about Ann that bother Tom: accepts <600 thread count sheets, has never seen a Paul Walker movie, doesn’t care about Blu-Ray, read books all the time, still has an iPad first generation and “he owns more Uggs than she does!”

– Oh No Nos or Things about Tom that irritate Ann: Talks through terrible movies he makes her watch, has 20” rims on his Volkswagen Golf and insist on being introduced as “the Brown Gosling.”

– “I was getting kind if sick of Tom and Ann talking about their relationship, but then remembered alcohol existed. (Takes swig) Thank you alcohol!”

– Ben’s half asleep, bed-haired and half-hearted “Surprise!” when Leslie walks in with Jerry in the middle of the night.

– Not a line, but a visual gag: Leslie’s campaign sign with a URL on it instead of the actual image