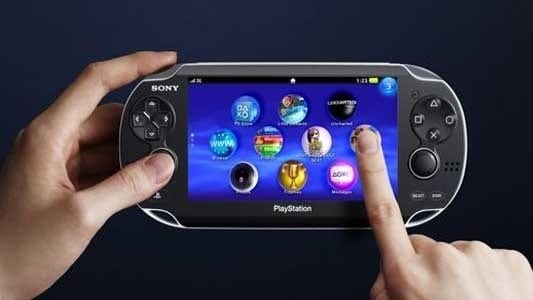 True story, two years ago at E3, I was seconds away from buying a PSP. I had been watching friends play Metal Gear Solid: Peace Walker all week, and we even went as far as to take a trip to a Hollywood Target. When we got there though, something stopped me — the thought that someday, something better was coming.

That day is February 22, when Sony launches it’s next handheld gaming system — the PlayStation Vita. Packed with features and a stellar launch lineup, The Vita aims to challenge the world’s notion of just what portable gaming can be, but should you jump in right away, or wait and let Sony work out the kinks?

There’s no debating that upon first look, The Vita looks an awful lot like the PSP, but looking closer, it’s a completely different handheld all together.

Featuring a 5′ multi-touch enabled OLED screen, two thumbsticks, two cameras (you know the drill, one front facing and one rear), a touch sensitive back panel and augmented reality capabilities, the Vita is not short of bells and whistles, but at this early stage, you’re really only going to use some of them.

The true standout of The Vita is the gorgeous OLED screen. Sony’s choice of using the OLED over the LCD works incredibly well, as it causes colors to pop and shadows to look incredibly deep. We booted up Ultimate Marvel VS Capcom 3 when we first got our Vita, and the flashy attacks work incredibly well.

With the screens impressive size though, comes one of the devices major flaws — it’s really not all that portable. Portable gaming means something very different than it did when the PSP launched; everyone has an iPhone or tablet with them at all times, which are easy to pack with you wherever You go, the Vita seems a bit too big for that. Sure, you could make the point that the Vita can easily be stuffed into a hoodie pocket or briefcase or work bag for the morning commute, but you can’t help but feel like a good portion of potential users will want something a bit more portable.

The Vita comes with two camera, one facing the front and one facing the rear and they’re a bit underwhelming. Both cameras are capable of both stills and videos, and they’re about on par with the quality of your average smart phone, but fail in comparison to more top of the line phones, and fail even worse when compared to full fledged cameras. For example, we took two identical pictures of my desk, one with the Vita and the other with an iPhone 4. the iPhone did a great job reproducing the colors and came out pretty clear, while the Vita picture had a noticeable amount of noise and blurred edges.

So what about that trackpad like back portion of the Vita? For what it’s worth, it performs well, but it often seems like the developers squeezed the functionality into their games at the last second. One of the best examples of this is how in Uncharted: Golden Abyss, the back track pad is used to climb up ropes, it just doesn’t feel as smooth and natural as using the thumb sticks and face buttons. This as opposed to a game like Modnation Racers, which allows you to use the back trackpad to level terrain in track creation, and works extremely well.

My favorite feature of the Vita though is being able to keep up to seven screens open at a time regardless of what game card is in the system. Think about it, say you’re running to catch a flight and you’re in the middle of a game in Marvel Vs Capcom, about to win right before you have to turn it off. Since you can’t save mid fight, just minimize the screen and come back to it when you’re able to. With that though, there’s a downfall — it’ll kill your battery.

So, about that battery. It’ll last mostly between 3-4 hours of continuous playtime, which isn’t all that great, but it’s not terrible either. I can see it being a problem on long flights, but other than that, you shouldn’t have much of a problem if you just remember to charge it when you get wherever you’re going. More often than not, people are going to be using the Vita on trains, busses and in cabs in the middle of their busy commute, and the battery life of the Vita feels perfect for it.

The Games
Editor’s Note: This is section is a generalization of how the Vita works as gaming device. Watch for specific reviews throughout the week

By far though, the Vita’s biggest improvement over its predecessor is that it includes two thumb sticks, rather than the one found on the PSP. It may not seem like a major thing, but most games, especially those of major franchises are built around using both of the thumb sticks, and having a system that relies only on the one requires developers to create entire control schemes that don’t fit as well as the original, as well as requiring players to relearn almost everything they know about playing games in the modern day.

The Vita does a great job doing away with all that, and even the company’s biggest franchises feel like they should — to an extent. Uncharted Golden Abyss feels an awful lot like Uncharted, just on a smaller scale, but it’s damn impressive that they made a portable game feel like Uncharted at all.

On paper, the Vita’s launch lineup of games feels like the strongest ever, but whether it is or not is debatable. The system seller will easily be Uncharted, but there’s some strong titles that you should consider when you’re picking up your new handheld. Lumines: Electronic Symphony, the puzzle game from Q Entertainment is tough to put down, and games like Modnation Racers, Touch My Katamari and Little Deviants are fun to pick up and play with little investment.

Like most launches with new tech, a lot of the games often feel like mere tech demos. Escape Plan for instance feels like a way to show off the quality of the screen, while Little Deviants feels like a how-to for the suite of new features and Uncharted feels like Sony trying to prove that this new tech can work with its established franchises. Does it? Mostly yes, but there’s are definite kinks to work out in the process.

The Verdict: Should you buy a Vita?

It’s always risky to buy anything when it first releases as there’s bound to be issues, price drops, or in the long run, new and improved models. During my two weeks with the PlayStation Vita, I can tell you this, I haven’t used my 3DS, iPad or phone for gaming, it’s been all Sony’s new machine. The screen is amazing, the additional thumbstick does wonders for the Vita’s credibility as a gaming system and though it’s not as portable as it could be, The Vita is a great way to take your games with you.

Are there issues to work out? Of course, but like any other launch, they’ll be fixed with time as developers learn how to better harness the potential of the new hardware. If you’re a commuter or at all in need of a portable gaming system, Blast highly recommends the Vita.

The PlayStation Vita is available February 22 and comes in two different models, one with Wifi for $249.99, and another that runs on AT&T’s 3G network for $299, This review was based on a 3G model, provided by the Publisher, along with the launch lineup.