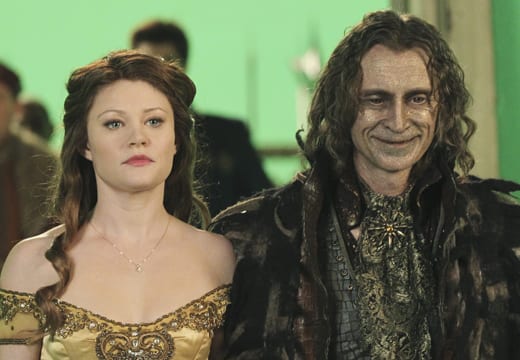 Last week I gladly declared that OUAT had found its identity and had squandered many of its pretensions and simply tried to be a damn good time. But this week, Kitsis/Horowitz seemed like a needy child tugging at its mother’s pant leg. I thought they were beyond seeking approval. All the Easter eggs and insider jokes like the Apollo Bars and the McCutcheon whiskey were just tributes to the landmark series they took part in. However with Emile de Ravin’s appearance as Belle (yes, of Beauty and the Beast fame) I wonder if Eddy Kitsis and Adam Horowitz, harbor a repressed need to catch lightning in a bottle again.

Surely, De Ravin’s guest appearance is simply an isolated homage, and lofty aspirations haven’t bogged down this creative team. Except, LOST is not the only acclaimed drama to catch OUAT’s wandering eye. They’ve snatched talent like Jennifer Morrison from “House,” Giancarlo Esposito from “Breaking Bad,” and tonight they made a “Game of Thrones” pun by naming a flower shop, “Game of Thorns.” I can’t decide whether it is endearing or desperate.

Much like some classic LOST episodes, tonight’s OUAT was a reveal episode. There was still a fairyback, one brought to life thanks to all those Disney rights! Ah, ABC, you treat them well. And there was “progress” in Storybrooke. But the real meat of the plot came during a two minute interaction between Mr. Gold and Regina where it was finally acknowledged that they both know of their former lives and evil power struggle. She goes all Destiny’s Child, “Say your name!” And he admits to awareness of “other worlds.” This wasn’t presented as a huge deal, it wasn’t even the final reveal of the episode, but it is a revelation with implications for the series at large. It is out in the open now, and if he knows the questions become, will he be a roadblock for Emma and Henry’s plans to enlighten the townsfolk (for my Losties, “Desmond-style”) or could he prove a formidable ally?

I was predisposed to be enthralled with tonight’s fairyback. Beauty and the Beast is almost certainly in my top three Disney flicks of all time (excluding Pixar) and Claire was one of my many beloved Oceanic 815ers so Emile de Ravin had me hooked with little effort. We’re introduced to the heroine as she stews by her father’s side, worried their village will be sacked as the Ogre Wars rage on (Am I the only one who would be fascinated by a detailed history of the events leading up to these wars?). I was mildly disappointed her dad was a rich, lordly fellow instead of an eccentric inventor. Anyway, Rumpelstiltskin appears as the solution to their suffering, promising to save their town in exchange for Belle’s services as his permanent housekeeper. Her betrothed, Gaston, insists she stay, but Belle is intent on breaking away from the social constraints of womanhood, seizing the opportunity to be heroic. She elects to go with Rumpy, much to his delight.

In the real world, there was much less interesting fare. Mr. Gold is robbed by a florist, Mr. French, after Gold nabs his van as collateral. Gold seems awfully upset over one particular item that Sheriff Swan hadn’t yet recovered and threatens that if she doesn’t detain Mr. French, he will get to him first. When he does, he beats the florist with his cane for information on the whereabouts of this item. He starts screaming about “her” and how it’s his fault that, “she is gone.” When he refuses to divulge the entire truth to Emma, he is cuffed.

In a Storybrooke subplot, Ashley returns. Who? Oh, that pregnant girl who is Cinderella in Fairy Tale Land (FTL). She’s overtired from taking care of the baby because her baby daddy Shawn is always at work being the breadwinner. Ruby (FTL identity: Red Riding Hood) suggest that she and Mary Margaret join her for a ladies night on the town. Both agree, especially Mary Margaret who’s once again unsatisfied by only being a part-time lover to David, who is still carrying on with his wife, Kathryn. I normally care about those two lovebirds, but the developments felt so wedged in, that I became detached. Next week their affair will come to a head when Kathryn finds out.

At Rumpy’s castle, Belles settles in after feeling initially weary about handing over her life to a “monster.” But as the “tale as old as time” foretold, Rumpy begins to treat her nicely, even pardoning her when she chips a cup. This is of course an allusion to “Chip” from Disney’s incarnation of the tale. You might say this reference made me groan, but I shall not complain as I promised last week. Rumpy begins to fall for her first, turning Gaston into a rose for his sweetheart when he comes to her rescue. Then, Belle’s opinion of her master (kinky) shifts when she falls from a ladder into his arms (the editing and VFX in this scene are ATROCIOUS). She begins to probe him for information about his past, when he was a man. She yearns to know the man she will serve forever better. In a move to test her affection for him, Rumpy asks Belle to go into town for more straw. If she comes back, he will tell her the story of the son he lost. He expressed that he expects her to never come back.

On her journey she runs into the Evil Queen. EQ informs her that her master’s curse will be broken, and his humanity restored if he receives true love’s kiss. Knowing that his beastly features and evil within can be eroded she returns to him. But when she shares true love’s kiss with Rumpy, he resists the change. He suspects her to be an agent of the EQ, trying to remove his powers, to weaken him. For her treason, Belle is thrown in the dungeon. After a tantrum in which the only glassware spared is the chipped cup, he releases her, never wanting to see her again. She calls him a coward as his son had when he killed to protect him, a genuine callback and reference that felt the most organic and essential of any they’ve attempted.

Shakeups in Storybrooke abound when Ashley accepts Shawn’s marriage proposal and Mary Margaret bumps into David. He hands her a V-day card, but accidentally hands her one addressed to Kathryn. This tips the scales for MM and she observes that they will find a way to be together, but this isn’t it. Back at SBPD, Regina bribes Emma with a half hour visit with Henry (this wouldn’t strike her as odd…awful sheriff….and where’s mystery writer/biker dude?) in order to converse with Mr. Gold. She confesses to encouraging Mr. French to rob him, asking that he bring her back…his chipped cup. She held this as leverage so that Gold would speak his FTL name. It’s a fun scene that recalls the legend that surrounds his name. As I mentioned before, this revelation that they both know could add a layer of mixed allegiances or simply heighten the risks involved in Emma and Henry’s pursuit of the truth.

While Rumpy slumps at his spindle over his reluctance to allow love in his heart, for fear of rejection, EQ visits hoping they can strike another deal. When he is not in the mood he accuses her outright of ruining their relationship. She cryptically answers that she had nothing to do with “that tragedy.” Puzzled, Rumps asks of what she speaks. EQ shares that upon returning home, her father had shunned her. He learned of her love for “The Beast” and has banished to a tower where clerics will cleanse her soul. Distraught, she threw herself out of the tower, falling to her death. This explains the sentimental value surrounding the cup in the real world, it’s all he had left of her. Or so he thinks. The very last scene of the episode shows Regina entering a secret wing of the hospital where “Belle” is locked up. What repercussions could this have for their eternal power struggle? I’m unsure, but again it opens up the dimensions for the real world adding a darker tinge to the episodes to follow. Gold, like EQ may not want to go back to FTL, but they want to vanquish each other. The more moral ambiguity that can be infused in these classics, the better. And with the sporadic investment in real world proceedings before this, another reason to care wouldn’t hurt.

Nearly all the real world happenings felt inconsequential. This irrelevant quality took a sharp 180 toward the end, but I can’t discount my utter boredom beforehand. Ashley had been gone for so long, her engagement felt like a formality. And when I start feeling blase about any plot point that involves Mary Margaret you know it hasn’t been well rendered. Despite these clear narrative shortcomings, it was pleasant to step into the world of “Beauty and the Beast” again, and it’s always a pleasure to watch Emile de Ravin smile sheepishly at me (ok, in my general direction). For it’s sheer entertainment value, and for effectively (and finally) incorporating the gritty, tragic elements of the FTL futility into the thrust of the Storybrooke setting, OUAT regresses but swings its pendulum in a positive direction with a B-.