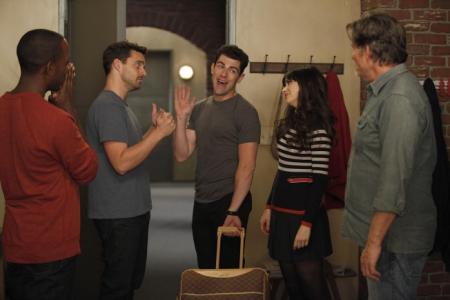 Jess (Zooey Deschanel) and the gang try to dupe their strict, creepy landlord.

A hilarious “New Girl” is no longer equivalent to finding a diamond in the rough. Dare I say, it may be the most dependable new comedy. All the praises I’ve sung in recent weeks still apply. I’ve harmonized about its self-referential humor, or melodized over hitting its stride in respect to laugh-per-minute ratios, and I must preach again to the overworked choir. The writers have not fallen asleep at the wheel, continuing to pit that undeniable “Jess-ence” (trademarking it!) against every dysfunctional roommate and guest star with stellar returns.

This week, we confront the eternal struggle of People inherently suck vs. People are inherently good. Original sin vs. Redemption. The cold open presents this ideological standoff when Nick vies for the same parking space as another gentleman. Both quickly resort to hostile tactics to get what they want. When Nick beckons him to fight, his opposition pulls out a gun. Jess then talks the man down by conceding that Nick was being an idiot and that she was sorry about the altercation. The man then drove off and the powers of optimism prevailed. Unconvinced, Nick does not back down from his stance that people are jerks at their core.

When more appliances start to break down in the loft, Jess insists they ask the janitor to fix them. When the manly trio suggests they don’t because he is frightening, she takes it as a challenge. She enters his basement office armed with a plate of cupcakes. When she tries to appeal to his estranged side she lets it slip that there are four people living in an apartment designed for three. Apparently the gang had prepared for such an event and initiates an operation whereby they empty the contents of Schmidt’s room onto their balcony and he pretends to be a foreigner visiting LA. Landlord dude (played refreshingly off-putting by the hulky Jeff Kober) isn’t buying, but upon inspection he deemed the arrangement acceptable (only if Schmidt’s paints over a disturbing mural he describes as a sexually charged, zero gravity tea ceremony). Jess then attempts to coerce some maintenance work out of him and like putty in her hand he agrees. Nick immediately assumes the landlord, who we learn is named Remy (Jess astutely observes his tattoo that reads, “Hello, my name is Remy”) is only trying to get in her pants.

The standoff that follows is a clash between two stringent believers. In quick flashbacks, we are enlightened about where their divergent perspectives came from in humorously simplistic vignettes. Nick’s memory is of finding a fiver on the sidewalk and feeling elated. Instantaneously, a jogging man pushes him into the brush after snatching it away. Jess’ memory is of a sketchy, grimy man pulling up to her in a white van who asked, “Do you like candy, little girl?” Jess unflinchingly answered, “I sure do.”

Now, I’m sure those of you who are like Nick and I were weary of what would come next. But of course, subverting stereotype, the man replies, “Good, because my nana made way too much!”. The sliding door of the van opens and a wheelchair-ridden Nana hands her a plate of candy. Obviously the world is much more nuanced than the hyperbolic scenarios that played out in their childhoods, but the show, once again, credits its audience with a high degree of intelligence: we know these are intentionally stark representations are going for laughs. Still, it provides us with a bit of context with which to understand why they so strongly defend their outlooks. I’d be down for this brand of characterization in the future where we can laugh at these embellished personifications of their childhood while being enlightened about their motives.

After completing his handiwork, and opening up a little about how he and his ex-wife, “stopped humping,” Jess invites Remy to dinner as a token of gratitude. Winston and Schmidt seem unenthused, still with some lingering fear of the burly man, but Nick insists he’ll stay as watchdog, protecting Jess from the landlord’s libidinous intentions. As the dinner progresses, and Nick and Remy bond over their harsh breakups, Jess begins her victory lap. She suggests that Nick should not sell people short and make it a habit to “dip your toe in the pool of possibilities.” However, she may have spoke too soon; Remy misconstrues their honest evening conversations as a preface for a menage a trois. Unwilling to relinquish or surrender, a battle to outlast ensues where Jess refuses to admit defeat and she plays along with Remy’s fantasy. Like a trooper, she fakes delight in the prospect of an excruciatingly awkward (Nick endures Remy’s callusy caress for far too long as well) threesome, up until Remy requests that Nick kiss her. She then folds and the gang resigns to tolerate any shoddy workmanship thereon.

Schmidt’s B-story reenforces his role as the comedic tour de force of the show, while remaining only slightly detached from the show’s soul. This is acceptable as long as he’s not ancillary to the main thread entirely, which this episode accomplishes. At work, his boss Kim is giving him mixed signals. Winston draws from history, convinced that Schmidt is once again misinterpreting someone’s interaction with him as an appeal for sexual gratification. The micro-montage of such instances was quite amusing particularly his insistence that the delivery man was definitely suggestive when he informed Schmidt he had “a package” for him. The most ingenious turn of this plot, however, was how right he was. Kim’s alluring tone as she requests he “Clean out her hard drive” was overtly sensual, but due to his miscalculations of the past, he refrains. Cece (Jess’ model gal pal that he pines for) advises him to go for it, since asking permission would only be a turn off. Therefore, when Kim alludes to spending the night alone with a bottle of wine, Schmidt conjures up the wherewithal to pounce on her. Unfortunately, when the security catch him in the act they observe incorrectly that he is jumping her and pin him on the ground and cuff him. The coda of this storyline is wonderfully absurd as well.

When Schmidt states his genuine intentions to pursue her romantically she uses her same luscious voice to urge him to dial her in to the Tokyo conference call. Perceiving this as the green light, Schmidt strips down to his skivvies in anticipation, unknowingly putting on a show for a fleet of Japanese businessmen as he pratices his sexy poses.

The thematic cohesion paid great dividends as we learn the dangers of staunch belief systems. Sometimes people do have ill intentions while being mostly kind-hearted and sometimes those who are attracted to us can ask us for favors without an ulterior sexual motive. The sitcom realm is frequently black and white, and “New Girl’s” stabs at meta-commentary continue to please and establish a sophisticated wit that I believe will usher in viewers who were skeptical of the show’s naked premises of a female roommate shaking up the lives of three male roommates.

I was disappointed, however, that Winston was not afforded a shred of a C-story. His two major contributions were as passerby witness to the thwarted threesome and as the discoverer of a damning list of Schmidt’s 2007 New Year’s resolutions (some of which I will post in L.O.L.Ls) and when he is tasked with painting over the mural in Schmidt’s “interplanetary sex dojo,” a description which had me gasping for air I laughed so violently. Winston has not always been neglected, but when he is it reeks of laziness, because they’ve sewn the fabric for future exploration of his post-basketball life and his struggles with readjustment.

The tie-in of assumptions and misinterpretations is presented so strongly though, its mostly forgivable. Nonetheless, I was thrown slightly as to why Jess would persist in indulging Remy’s horndog tendencies just to prove a point. It would only serve to degrade Jess to engage in such a seemingly horrendous act, but I suppose the over-the-top elements speak to how strong Jess and Nick’s convictions are to be right. Also, it served the added function of strengthening the sexual tension by teasing the “pool of possibility” that they might kiss. I’m not the biggest fan of a will they/won’t they scenario for this show, but those two clearly exude the most chemistry so I will keep an open mind, as Jess would recommend.

Those reservations aside, this week churned out another 22 minutes of top-shelf jokes (a surprising number were delivered by Zooey Deschanel as she continues to debunk the myths of her comedic shortcomings), reaffirmed my man crush on Schmidt’s buffoonery, and enhanced Jess and Nick’s likability by offering a background for those who scorned their apparent one-notedness. My outlook for the series’ future reflects that of our incessantly sanguine title character. “New Girl” persists in the face of low, but premature critical expectations, beating the odds with sustainability and a B+.

– When a stranger brandishes his gun, Jess shouts, “Oh my god, it’s like the Wire!”

– “You look like you should be distracting James Bond at a baccarat table.”

Some of Schmidt’s more notable New Year’s resolutions from 2007:

1. Find the cocoon that will release your inner butterfly

2. Find out where Winston gets his sparkle and steal it

4. Just pick a color of Crocs and buy them already!

“Did you go out looking for companionship, a little human warmth, and when you came to you were in the woods, covered in animal blood?”

– Nick to Jess: I think you could do a lot worse than Remy. He’s got strong arms.”