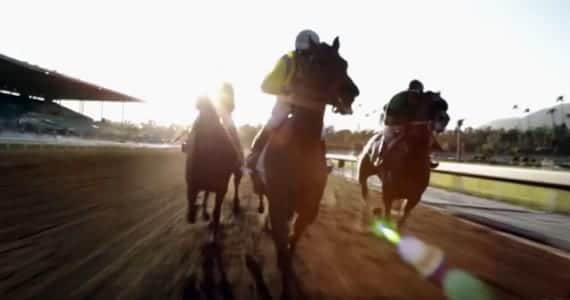 HBO doesn’t do small-scale. Sure, “The Sopranos” was a family drama embedded in the all-consuming network of the mob, and “The Wire” never neglected the personal struggles within the deteriorating city of Baltimore, but both shows required a steep learning curve (a few episodes) before one could fully immerse themselves in these familiar yet foreign expanses. There was no denying, however, the web of interconnectedness from the get-go. Everyone shared a commonality of experience, the impact of their worlds’s stranglehold, the futility of escape. Whether tied to a family, an occupation, a city or a way of life, these dramas always emphasized the love/hate relationship people have with the place they came from, and how indelibly linked its character is to ours.

“Luck” follows this formula. Last week, it was a universe that seemed impenetrable for outsiders and the unestablished connections between the track insiders had us scratching our heads. I was compelled by the grandeur of this well-oiled, horse racing machine. So many cogs were operating, but the functions of each gear eluded me. Then I remembered the insistence and the infinite wisdom of “Luck’s” predecessor, “The Wire,” “…All the pieces matter.” With that in mind, the labor of the pilot paid off this week. The table-setting paved the way for exploration, and as viewers we begin to recognize where the tragic threads are being woven. Revenge plots are being forged, envy and greed threatens the glory in victory, and opportunities to climb the ladder present themselves.

THIRST was the overriding feeling of the episode. Every one had a compulsion, an overwhelming desire. Some were fulfilled, some were denied, but none subsided. All are bitter about changing world. One woman even mentioned President Obama (referring to him coyly, and farcically, as the Muslim President from Kenya) in creating an analogy about broken promises. These are people set in their singular ways about prosperity and success and they won’t be satisfied with their latest score. They’re going to play the game until they win big or you lose it all.

Ace Bernstein (Dustin Hoffman) already lost it all. We finally learn the origin story of his three-year prison sentence. He fell on his sword, taking the charge for his grandson at NYU, and an unseen associate, Mike. Mike was stashing his cocaine at a co-op apartment that Ace had purchased for business and entertainment. He allowed his descendant to use the place for raging parties and one night the cops crashed it, arresting the grandson on a lofty possession charge. Ace was offered a deal. His flesh and blood would be set free if he would divulge the name of the supplier. They knew it was Mike, but they required official testimony. Ace had never ratted on anyone his whole life, and though Mike would have snitched on him in a heartbeat he took the fall so both Mike and his grandson would remian free. Nevertheless, all’s not forgiven.

The business dealings of last week come into sharper focus as we learn Ace is planning to buy the Santa Anita track and convert it into a casino. What remains undisclosed is how this transaction will factor into his vengeful scheme, but he’s on the warpath, no doubt about it. Gus, “The Greek,” owning a horse is also a piece to the puzzle, but as far as I’m concerned the slow reveal of the details is earned by Hoffman’s portrayal of a sleeping giant. He exudes a slick poise, but on occasion will unleash a lion’s roar to alarm his partners about his grip on reality post-incarceration. He is dangling the bait, and we’re waiting for for one of his investment “pals” to bite. His bluntness and sarcastic debonair make him both fearful and likable. His sinister unveilings of payback have you rooting for his badass “Bernstein temper” side and his tender reflections with Gus at day’s end bring him down to earth, like a Grandpa with lessons of hard work and determination to impart.

Our four “degenerates” come across some difficulties adjusting to their newfound fortune. Jerry’s gambling addiction runs rampant with the recent influx of funds and his willingness to keep playing despite huge losses reaches dangerous levels. He loses $7,000 in one night only to return the night after. But as he watches his thousands of dollars in chips slip through his fingers, his resolve to win only strengthens. When he barely ekes out the biggest pile of the night he’s floating on a cloud, impervious to harm, but with such a large margin or error and so little willpower to walk away, we might as well start counting the days until either the thrill of the chase overtakes him.

Renzo appears to be the most kind-hearted, if  not the most childlike, of the four, and wishes to repay his gratitude through a grand gesture. Now that he can afford to, he wants to lay claim to a horse. In order to manipulate the odds, trainer Turo Escalante (John Ortiz) enters his horse Mon Gateau (one of the degenerates’ Pick Six winners) into a claiming race. The only hitch is Renzo is eyeing that horse. With all the  good karma surrounding it, after it proved to be key to their jackpot, Renzo figures he should scoop it up as the perfect gift to the group. When Mon Gateau wins the race, validating Renzo’s interest, he’s hopeful that he will capitalize on his investment. But another claim was put in. A man named Mulligan had gathered the same intel and after drawing marbles, Mulligan wins the horse.

Marcus, my favorite of the group right now because of the biting insults and his weathered voice of reason, is disgusted by Jerry and Renzo for flaunting their money. He feels they are asking to be targeted by those willing to resort to violence to obtain their winnings. They are relatively tame in their extravagance, however, compared to Lonnie, who dons a new suit and hat. Marcus has a fit. Lonnie’s stray remark about “having two insurance women pay him to f**k” is also explained. Supposedly, these two women are indeed insurance agents, and they have orchestrated a scam involving Lonnie and a fabricated “slip and fall” (watch out for the irony in this term, I’ll come back to it toward the end of the review). As Marcus had predicted though, they learned of his recent cash infusion and change the plan. They took out a life insurance policy in his name and after seducing him and spiking his drink, attempt to kill him. As (wait for it) luck would have it, during their scrum they break through the motel window and a passerby whisks him away and drops him off outside of Renzo and Marcus’ room.

On the track, Escalante is furious after Mon Gateau is claimed and suspects Leon of loose lips. Preoccupied, he fumes at Gus when he makes a innocuous remark about his horse’s condition. Escalante takes a lot of pride in his expertise and when that authority is challenged, or undermined in anyway, consequences (inadvertent or otherwise) are to be expected. Earlier in the episode, Leon did confide in his agent, Joey Rathburn, wondering whether the horse that was put down last week wasn’t fit to race, and Escalante knew beforehand. It’s a heavy allegation and Joey says that he should just keep his mouth shut and ride exactly as Escalante advises. On a side note, Escalante continues to strain my ears with his thick accent, but David Milch and his writing staff are very aware. Another character references it, “I must need a vacation because I just understood everything you just said.”

Rosie, the ravishing Irish women who’s employed as exercise rider by Nick Nolte’s Walter Smith, makes a bold move and requests that she be Gettin’ Up’s jockey. She has established a strong rapport with the horse who continues to dazzle in workouts, but Walter has his doubts. Evidently, horse racing is a man’s world, but Rosie’s humble perseverance give Walter pause. Wanting the best for his horse he hires a Kentucky Derby-winning jockey, Ronnie Jenkins, who seems like the sure bet. Little does he know that Ronnie has a drinking problem and may have passed up the better candidate. In a kind gesture though, Walter asks Joey Rathburn (also Ronnie’s agent) if he’ll put in a word for Rosie at another track, Portland Meadows, and set her up with a good agent. Yet that wasn’t the moment most worthy of Walter’s highlight reel. During his discussions with Ronnie, he recalls how Gettin Up’s father, Delphi, was murdered. When his owner, “The Colonel,” (it is never made clear if he meant the KFC founder or not) the men who took over his farm spent irresponsibly and killed the horse for the insurance policy. He laments over what he could have done to stop it, and describes the sound of horses’ legs breaking as branches snapping. Nolte’s delicate treatment of this tortured soul has already won me over, along with the easy-on-the-eyes Kerry Condon as the trailblazing Rosie, I wish him the best in the episodes to come.

Some will complain that show moves too slow, but I would argue that with all the pawns being put in place for the endgame, maybe it moves too quickly. Because the intrigue is mounting. Balls are rolling as tensions rise and each character offers their own vibrance and zeal. Milch’s dialogue contains a firecracker wit, that adds a bounce to the deliberate pacing. Much like the horse races themselves, the show is high stakes, and as the characters’ need to quench their thirst becomes more desperate, the more invested we become in their “slips and falls” and who/what else will stumble in the quakes and aftershocks. Like Jerry at the poker table, each loss only drives me to come back and leave with the whole pot. The payoff is nowhere in sight, but my fixation on its possibilities match the yearning that intoxicates the “Luck” universe. The joys quickly fade, giving way to the race that lies ahead. Risk is equaling reward so far, as David Milch goes all in. For the audacious cast, the haunting sense of place, and the commitment to thematic balance (the scores and the failures, the lively thrills and the deathly devastations) HBO’s gamble comes out of the second turn (with seven episodes of ground to cover before we reach “the straightaway”) ahead with an A.*

*As of January 31, HBO showed great confidence in “Luck,” after over 3 million watched the series premiere, renewed the show for a second season.