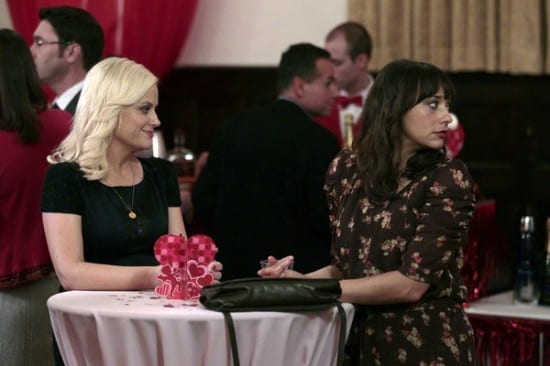 Ann (Rashida Jones) waits impatiently for the slew of dates Leslie (Amy Poehler) has lined up for her.

At times, “Parks and Recreation” can feel like a delightful embarrassment of riches. There are so many balls in the air that you wonder how they could possibly be juggling them all. Just as you did with the pretty, popular valedictorian in high school, you dug deep to extract that one irredeemable quality. The pivotal flaw that you could exploit to prove she doesn’t deserve the student body’s worship. Then you confront that flaw and realize that even her imperfections make her likable. Then you hate your yourself, because you aren’t pretty, popular, or smart and your flaws just repel all the attractive people.

Excluding the last sentence (I think I’m swell), this has been my relationship with “Parks” as a critic. As a fan, I have laughed my ass off, fallen in love with all the characters, and even began to prefer hanging out in Pawnee over my hometown in suburban Connecticut. As a critic, it’s counterintuitive to my very existence to unconditionally adore any TV show. That same act of extracting flaws is turned toward more productive pursuits (in my humble opinion), the analysis of what makes for effective storytelling. In the case of “Parks,” I have crammed my reviews with praise for the writers’ ability to craft and maintain multidimensional characters and how they can cultivate jokes rooted in their specific traits. Tonight’s episode, however, reminded me of Ann: quite possibly the sweetest, most charming blemish.

Leslie’s best friend and ex-girlfriend to both Chris and Andy, is largely defined by those relationships. Who she’s dating and how exemplary her friendship with Leslie is, are her major talking points. Tonight spoke to the show’s stagnation with her role, and the stagnation it can foster when she either isn’t dating someone or when Leslie’s attention is focused elsewhere: such as Ben and her campaign. But what made this episode extraordinary was that it simultaneously answered that concern with rich possibilities for self-discovery that can add to the already intricately-woven tapestry that is the Pawnee Parks Department.

It’s February 13, or as Leslie has dubbed it, Galentine’s Day: a celebration in sisterhood. The adorable concept, Leslie  takes her gal pals to brunch so that they may love themselves as women, individually and communally, but separate from the men in their lives. Obviously, this year is different. Leslie’s in love. Silly, miraculous, sickening, dreamy love. And Ann, who churns through guys like today’s teenagers do cell phones, is alone. During her “confessional” she convinces herself that she is at piece with her singlehood, and at the table she congratulates the others (Donna, Leslie’s mom, April) on their relationships. However sincere, it’s laughable how sarcastic she sounds. Immediately, Leslie swoops in to save her dearest friend like a animal caught in some netting. This is not an original plot by ANY means. Ann and Leslie have played opposite roles, but the general principle of matchmaking prevails. What makes it feel brand new are the contributions from the rest of the gang. They’re not at all obligated to, but because Leslie would “lit’rally” do anything for them, they ask Leslie “How high,” before she even requests they jump. Sure, it wasn’t the cleverest plot ever conceived, but it gave us an excuse to return to the giving, thoughtful Leslie. It would be an exaggeration to say politics has changed her, but it has forced her to be self-absorbed, and before I could recognize how much I missed her magnanimity she reappeared.

The scope of her altruism extended to her valentine as well. Though they had promised not to exchange gifts, Ben had a stuffed animal made based on her recurring dream of a playboy otter (where do these ideas COME FROM), and she gave him—a cryptex. Inspired by the first movie they watched together on Starz HD, “The Da Vinci Code,” it’s a device that stores inside instructions on how to arrive at his surprise. Of course, he must know the five-letter code first, and he is clueless. Thus, the ingenious trio of sleuths, Ben, Ron and Andy is formed (not before Ron and Andy suggest the code might be f**k and actually “break it”). Hot on the trail, Ron tries to resist the allure of riddles and clues. Once he discovers he has a knack for the game, his patented giggle is unleashed, one that is only revealed when Swanson breaks down his meat-soaked, manly exterior and simply enjoys himself. The point is illustrated superbly in one outlandish, ironic scene, Ron enters “The Bulge,” Pawnee’s premier gay bar. He confidently saunters in, inquires about Leslie’s clue, retrieves it and then walks out giggling effeminately as the aroused patrons gawk at him, bewildered. It’s a truly mesmerizing scene that renders you silent until the awes dissipates and you erupt at how splendid it is to watch Ron own that room, as if it were his old stomping grounds, despite being the antithesis of the Swanson way.

At the annual couples dance, sponsored by the Parks Department, Jerry, April and Tom try to scrounge up candidates to be Ann’s date. Jerry incidentally hires a gay male escort and Tom contributes the cowboy wanna-be, Harris. Harris is played by Emerson College alum (rep my school!) Harris Wittels, one of the most frequent writers for the show. He makes an impression as a lives-at-home Phish Phanatic (he’s been to 308 concerts). Former flame, Chris, has sunken into the polar opposite of his usual optimism, all-encompassing sadness. As DJ for the event, he constructs the most miserable playlist. Tom, often a catalyst for parties trying to break the fun barrier, tries to cheer him up pointing out how many prospects could be out there in the dance floor. Chris’ pessimistic reply is that no one compares to Millicent Gurgitch: everyone except her father Jerry. What ensued was the laugh out loud nominee for best facial expression, a longing, gentle stare from across the room. Just the idea of Chris yearning for Jerry makes me burst out.

Eventually, Ron solves Leslie’s 25-clue scavenger hunt when he suggests that the only thing she covets more than romance is being right. He asks Ben if he has recently shifted to her way of thinking on a point of disagreement recently. Ben applauds Ron’s expertise and rushes over to Lil’ Sebastian’s grave. As fans beyond this season will know, Lil’ Sebastian is the miniature horse that captured the hearts of Pawneeans, no matter their creed. Ben (even Ron got visibly choked up at the horse’s funeral) doesn’t get it. The appeal escapes him. Leslie is blissfully unaware of his true feelings though, thinking he has finally come to understand his greatness. Her reward for Ben was to treat him to dinner, but when she suspects that Ann and Chris have left for a secret date to rekindle their feelings and remedy their loneliness he suggests it would be better that they spy on them. They would, of course, be breaking the same rule they had: a personal relationship between a superior and his subordinate.

All these shenanigans lead me back to my thesis on this episode’s depictions of growth. April, despite her usual ambivalence, or even sometimes active rooting for chaos, showed last week with Chris’ grieving that she puts others before herself in order to make them happy. Is it possible Leslie’s selflessness has rubbed off? At any rate, in this episode April assists the women she swore to despise ever since she kissed the man she’d later marry. Not only has her hostility softened, but she actively seeks to support Ann by offering an unlikely solution to a lack of well-intended male attention. Tom. No, seriously. This was no sabotage by April. And she makes a salient point. Tom, when you carve off the layer of swagger-ful facade, he is at his most basic elements a sweet guy who would dote on Ann, and make her feel like the most adored and important woman in the world, even against his better judgment. April also observes that Tom is the sole man to make her laugh and smile that night.

Upon LesBen’s arrival at the restaurant they had followed Ann to, it’s revealed to us that the Tom/Ann pairing came to fruition, at least for a few drinks that night. They were the secret date Leslie had speculated about. Suggestive of her improvement in approaching healthier romantic relationships, Ann decides to allow Tom the opportunity to audition. By all accounts, he fails miserably. He makes some wisecrack about getting to know each other so they may later “snuggle up, like little bunnnnnies.” Ann says, “Ugh, this was a mistake,” and it’s over. So Tom doesn’t make significant strides like April did, and Ron only told Leslie how titillating he found her series of riddles in reverse psychological code. And that’s okay. It wouldn’t have been so authentic if everyone had resolved their imperfections. Ann remaining a “beautiful spinster” is not a blight on the tapestry’s fabric.

For me, “Operation Ann” signified progress. Alan Sepinwall, a fellow critic whom I look up to, theorizes that maybe April’s marked spike in maturity could be a precursor to her breaking away from Andy. One of his commenters suggested maybe it is his Andy himself, and his pure heart, that has galvanized her good deeds. Either way, whether April blossoms into a benevolent young lady is immaterial. It matters not that Tom thwarts his chance to woo Ann. The vital ingredient this episode added to the mixture was motivation. As mentioned above, I applaud the “Parks” staff for their commitment to the authenticity of their characters. Their voices are distinct and their ideals, their motivations, their far, their desires are clearly mapped, by now. But my stamp of approval was earned when they broke their own conventions of the characters allowing them the forward movement to fundamentally change aspects of who they are.

We want to spend time with these guys because they feel real, because they assert themselves. They make mistakes. They live. And there’s no reset button that erases the previous week’s errors in judgment. There are rules, and damn it, they break them week to week, but not without consequence. The numerous slaughter murals that adorn Pawnee’s City Hall may not be an accurate representation of the kind souls we’ve come to know inhabit that town, but they do convey an undeniable truth of their world and ours. Nothing lasts forever. When discussing the roots of his despair with Leslie, Chris tellingly poses the question, “What if I have already achieved my personal best?” Because they pushed our pals along with the winds of conflict and change, and by testing their “babies” they challenged themselves (as writers), while not sacrificing the consistency and rhythm of its rise-and-fall jokes, the “Operation” was successful… A-

– “Thank you for being here. Let’s get started.” “Wow, Ron. Great attitude!” “Sorry, I was talking to these ribs.”

– “April hates Valentine’s Day, and brunch, and outside, and smiling. Haha, she’s weird.”

– “Let this be a call a wakeup call about how you present yourself to the world.”

– “Can we change the music? It kinda sounds like the end of a movie about a monk who kills himself.”

– “Screw romantic dinners, let’s go rub it in their face!”