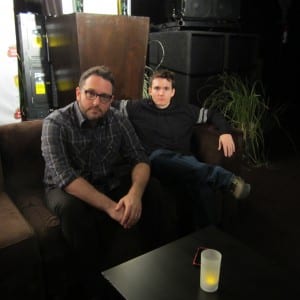 PARK CITY, Utah — “WANTED: Somebody to go back in time with me. This is not a joke. PO Box 322, Oakview, CA 93022. You’ll get paid after we get back. Must bring your own weapons. Safety not guaranteed. I have only done this once before.”

Director Colin Trevorrow and screenwriter Derek Connolly’s feature film, Safety Not Guaranteed, premiered last night to warm audience response. The applause couldn’t even wait until the end of the movie, but instead burst out at exciting intervals during Connolly’s low-key and touching descendent of the screwball comedy genre about a magazine intern whose boss deploys her to respond to a mysterious personal ad seeking companions in a time traveling adventure.

The idea for the script germinated from a real personal ad that Connolly has to wrack his brain to recall better. “I wish I could actually remember where I saw it first, because I’m starting to have doubts that I found it on my own (or if) I actually did see it through Jay Leno. He had it on his show and I was resisting the idea at first, but he actually might have been the first one to clue me.”

According to Know Your Meme, an Internet investigative website, the ad first appeared in an English language paper about Danish news and has inspired extensive tributes and spoofs beyond Leno’s 2007 “Headlines” segment. Derek and Colin’s 2012 Sundance Film Festival entry is their first feature film.

After Derek’s exposure to the idea, he filed it away until seeing Aubrey Plaza in Judd Apatow’s 2009 serio-comedy, Funny People. Derek started writing Aubrey’s character, Darius Britt, an almost derisive skeptic, who falls for the subject (the writer of the time travel ad) that she sets out to exploit.

In a real sense, Aubrey was the muse who took Derek and Trevor to Sundance. She is currently starring in NBC’s cult hit Parks and Recreation as April Ludgate. Aubrey’s performances as aspiring comedian, Daisy Danby in Funny People and  comic book semi-hero Julie Powers in Edgar Wright’s Scott Pilgrim vs. the World, as well as a previous trip to Sundance– in 2009’s Mystery Team— clearly prepared the steadily working 2006 Tisch graduate and Upright Citizens Brigade alum for a starring role.

“We’ve done feature writing for various studios,” says Colin. “We were in a comedy writing class, where we thought the other was funny. That kind of thing can immediately draw you to somebody else. You sort of see through everyone’s sensibility. Like, I just get that guy’s sensibility, but it’s different enough from mine that I think it could be a good combination.”

Judging by the response from festival-goers the pair, who have written and produced for each other on various projects over eight years, has a film with a good likelihood of some type of distribution. A unique addition to the lexicon of time travel films, Safety Not Guaranteed is not about time travel, so much as it is a study of the connections made between people who wish time could work differently.