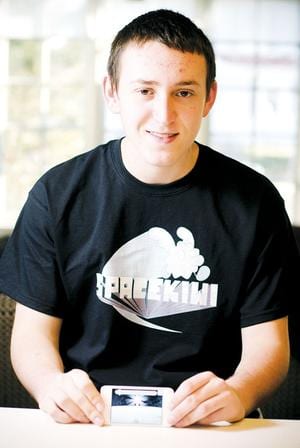 NEWTON — A Newton North High School student has designed a new iPhone game that is garnering a lot of attention in the mobile gaming community.

Indie developer Eli Bock is the creator of Space Kiwi. His company, ORRO Apps, is marketing the game on the App Store.

At 16 years old the Newton North sophomore has accomplished what many adults are still striving to do, starting his own business and being recognized for his work by large corporations.

“I figured the App Store could use a family friendly, gender neutral game,” Bock said. “I think this game is really accessible to the casual player. You can just pick it up and play.”

The game came out in December, and Bock said he was excited that smartphone users around the world would be using his creation.

Space Kiwi is an arcade-themed title that’s all about quick reactions and high strategy. Players embark on a journey with the little bird Space Kiwi to save planet Earth from the menacing Moon Men invasion. The Space Kiwi battles through six different zones featuring challenges in the air, sea, land and space during its counterstrike.

There are a total of 60 levels to brave through, with each one becoming more challenging as the player advances. Also, 28 different enemies with all kinds of super powers attempt to thwart the Space Kiwi’s efforts which makes for an unpredictable experience. As players take down the monsters they earn points and level ratings.

But on your way to the moon you cannot forget to collect as many coins as your Space Kiwi can snag to rack up high scores.

There are a lot of levels and challenges but Bock ensures that this game is user friendly. Gamers just have to tilt their smartphone to navigate the Space Kiwi to victory and tap the screen to shoot down enemies.

What really makes this new app stand out from the rest is the characters. It is the first game app for the iPhone to have characters with fully animated features. All of these features were conceptualized and drawn by Bock himself. His interest in animation stemmed from an early age.

“I’ve always been interested in drawing. It started out with drawing then moved on to comic books then games to get the most interactive experience possible,” says Bock.

Because of the creation of his new game Bock founded his company ORRO Apps. He now has many more opportunities ahead of him with the launch of his company.

Bock wanted to incorporate his ideas mainly because he felt it was a more professional approach. Also ORRO is a label he can put on his apps that people will recognize in the future. This label will appear every time a player boots up Space Kiwi.

Since the success of Space Kiwi, Bock plans on continuing to design more apps. As of right now the indie developer says he is juggling six or seven ideas but has to choose the right one to be his next his project.

Bock is already being recognized locally and he says some of his teachers have even bought his app. With the success of Space Kiwi still going strong one can expect many more great ideas from this young innovator.