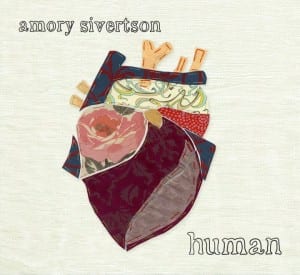 Amory Sivertson — a piano playing folksy pop singer-songwriter reminiscent of Sara Bareilles and Feist – recently released her third album titled “Human.” The song of the same name begins with the line, “sometimes I do things that could either win me a medal or land me in jail.” Amory stated that investing in making music is her favorite high stakes activity that could fit this dichotomy. “I think it is what could make me the happiest in life and support me. But it is also the thing that could lead me to invest a lot of money in a project that may not come to fruition, could bankrupt me, could lead me to the poor house. That fills that kind of binary, I suppose.”

Her goal is to become “a self-sustaining musician. That music is how I feed myself and clothe myself and buy Christmas presents for the people I love,” Sivertson said.

This goal is deeply entrenched within the songwriter. Her father is a drummer and music teacher. Playing music has always been a part of her upbringing. As a child, Amory’s father “would make little dorky songs on the spot all the time like when he was doing dishes.” Once Amory began playing piano, music theory became a form of communication between her and her father. “We could converse in that way, in a new shared language,” said Amory.

She continues to speak this language. “The end goal was always to be a professional musician,” said Amory. But after realizing that she didn’t have the Hollywood connections to make it into the Mickey Mouse Club, her path changed. She began playing open-mics, going on tour, and pushing beyond her comfort zone. She believed that “if you want to be a rock-star, you can’t go to college.”

So after entering Emerson College, her idea of attaining success changed again. Being around other creative types and becoming entrenched in a new audience, only “fueled the fire” for Amory. Her belief switched to getting discovered and dropping out. But now as a recent graduate, “I have had to redefine the road to getting there,” once again.

“How do I pay the loans and not completely bankrupt myself and still keep moving forward with music?” asked Amory.

The idea of financial priority makes its way into her music as well. On “Human,” the song, “Put It in the Bank,” is an upbeat romp reflecting on the value of money with a catchy hook featuring the staccato syllabic line, “p-p-p-put it in the bank,” as the title suggests. In regards to the song, Amory stated, “I hope that people know that the bank isn’t necessarily your own personal bank account. It’s putting your money where you think it can do the most good. And if that’s your bank account, than sure put it in your bank account… [But] we should become more conscious of where we are putting our dollar because the dollar you drop could earn you a medal or land you in jail.”

“We created money and we created the problems that go with the money. So we have to know what were doing with it,” according to Amory. Her ideas that run throughout the album are complex and meditative, yet succinct.

“I think the essence of Human that runs through the material is flaws and uncertainty. Learning the balance between… the tremendous potential we have as a species with our brain power and whatnot, and our very primal instincts… It’s the balance between the wonderful things we are capable of and the terrible things we are capable of. And the great potential we supposedly have and the very primal instincts that we have to just eat, sleep, have sex. That’s it.” She chuckled after deducing the human experience to three things.

The cover of Human features a collage of patterned textiles in the shape of an anatomical heart. When asked about the theme of humanity, Amory responded, “any album ever could be called human as that what art supposedly is… Trying to share with people a piece of what it means to be alive. Whether song, painting, poem, sculpture, autobiographical or whether its completely made up, it is all supposed to be sharing a piece of this human connection and human experience. So really any work of art can be titled human, because that is the way it is supposed to make us feel.”

“The Tour Song” represents just that. Amory stated, “the song really tells the story of Mike and I on the road. The story of two people finding happiness in what they are doing together… two people together for 40 days, 24 hours a day…enjoying each other’s company.”

The song was written before the summer tour that Mike and Amory went on together. But after closing every concert with the song, it became titled the “Tour Song.” It is loosely inspired by “Away We Go” – a film about the misadventure of a couple (John Krasinski and Maya Rudolph) travelling to different cities in search of a new home. The song expresses “the idea of settling down and being satisfied as just being two people together. And then becomes what if we can’t do what we want to do together,” said Amory.

Mike is Amory’s boyfriend. A large part of the album was recorded at the Office, a recording studio in North Andover that Mike runs. “Ever since Mike and I have been together, we have been making music together,” said Amory. Their relationship is beautifully on display from the first song, “Wrap My Arms,” to the last song on Human, “The Tour Song.”

Amory’s album can be heard and purchased here.