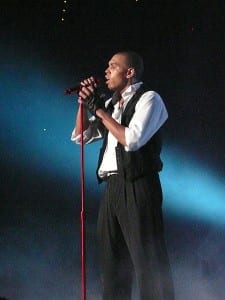 Three years after the tumultuous end of Rihanna’s relationship with the abusive Chris Brown, rumors have emerged, suggesting that the two have been hooking up for the past year.

A source says “Rihanna loves to live dangerously, and talking to and hooking up with Chris is all part of that.”

However, contrary to the gossip, Chris Brown’s rep told ABC News that “He and Rihanna are just friends,” adding, “He is with his girlfriend, Karrueche, and is not cheating.” Brown has been with his present girlfriend for several months.

Other sources say that the two “meet up very casually”, but that “she comes to see him anytime she’s in L.A.”

As a result of Brown’s assault on Rihanna, there is a court order requiring the two to remain apart.