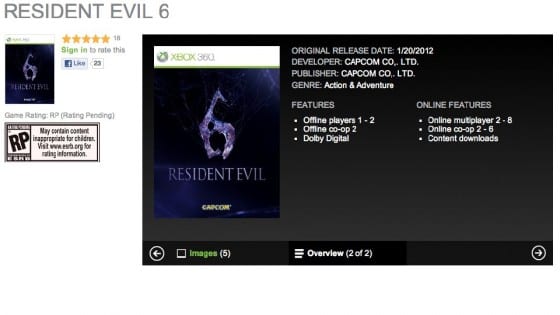 If a new posting on Xbox.com is to be believed, the newly announced Resident Evil 6 may be amping up its online suite to feature six player online co-op.

The listing, for whatever its worth also features a wrong release date (the game is confirmed to release on November 20 of this year) says that the game will feature 1-2 player offline co-op and 2-6 player online co-op. This wouldn’t be the first time the series would feature online co-op — the last game in the main series, Resident Evil 5 featured two player co-op while the upcoming Resident Evil: Raccoon City will feature four player co-op.

No word on whether the six player co-op will be story based or a new cooperative mode. We’ve reached out to Capcom for comment and will update this page if we hear back.