Jessica Ruth Goldberg will be reporting from Sundance during the festival for Blast. This is her first article since arriving. 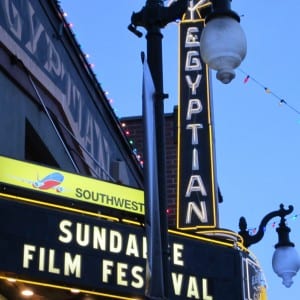 PARK CITY, Utah — I’m sitting in a wooden lodge, waiting out the extra hour to speak with filmmaker Kristina Nikolova, about her film, Faith Love and Whiskey, which opened the Sundance Film Festival last night. Outside the windows, there’s a beautiful view of the snow shower that’s delaying her.

The past couple of days in Park City, the sidewalks have been swept, and the mountains dusted with a picturesque, but non-functional powder.  The skiers in town have been grumbling.  The film goers have been nodding with vague sympathy.  Really though, I’ve heard a low hum of delight.

The town  has been unusually accessible without the usual 4 to 10 inches of frozen froth we normally wade through. Beyond the relief that weather delays won’t keep us from our next screening, the air has been clear of flakes, so that we’re able to see how beautiful Park City is, even without a coat of white.

Now, the red carpets are surrounded by sludge, and the stars are appearing in snow boots. Tim Heidecker and Eric Wareheim, of Tim and Eric’s Billion Dollar Movie, are dressed in the unofficial Sundance uniform of waterproof boots and puffy jackets.  Tim and Eric yelled and made faces for the cameras at their Park City at Midnight premier.  I’ll sit down and speak calmly with them on Monday.  Check back for the full interview Monday night.

When I finally meet Kristina she shows no sign of her trudge through the snow.  A beauty with perfect makeup  and hair, her hottest accessory is probably her handsome fiancee and co-writer, Paul Dalio, who journeyed with Kristina to Bulgaria where they fell in love, developed her story, added some drama to their own story, and where Kristina’s feature was shot.

Check back later for the full interview with Paul and Kristina on their first feature, and one of the most romantically entangled movies on the indie scene.