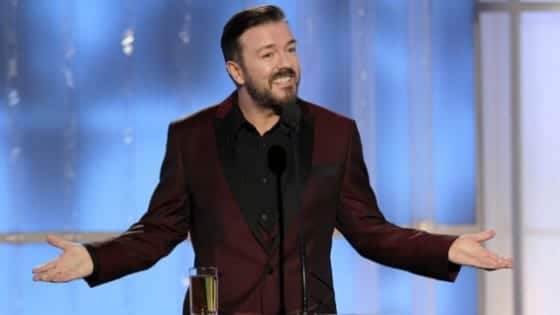 Host Ricky Gervais shrugs after slamming many of his acting peers at the 2012 Golden Globes.

The Golden Globes are often diminished by critics for not having its finger on the pulse. Many films and TV shows that have no business winning awards are honored for being popular and legitimized as part of the zeitgeist. In retrospect, I suppose this assessment is fair. Though often times, they get it right, and the Oscars do not. Why just last year “The Social Network” beat “The King’s Speech” for Best Drama and then the latter usurped the former for the Best Picture Oscar. We could certainly pigeon hole both award shows and dub The Globes a popularity contest and the Oscars the politics of the industry, but that would be unfair to the dedicated performers and artists to devalue these tributes to their talent. Sure, I can lay back on my bed and scorn the voters for their lack of vision, and claim it a blight on the history of storytelling and performance. Host Rickey Gervais did as much with this controversial analogy: “The Golden Globes are to the Oscars what Kim Kardashian is to Kate Middleton…one’s a little trashier…a little drunker…and a little more easily bought, allegedly.” But in the end, despite the biting wit of the always quotable comedian, these folks will still have more hardware atop their mantles.

If you are unfamiliar, the Globes are unique in that they honor the past year’s exceptional artistic achievements in TV and movies. In the TV categories, “Homeland,” the breakout hit that pits a bipolar renegade CIA operative against a former POW turned terrorist sympathizer (and my favorite new show) nabbed the big award for Best TV Series – Drama. Also capitalizing on the success of Showtime’s critical darling was the magnificent (and totally deserving) Claire Danes who plays that loose cannon federal agent who will push any boundary, whether ethical, social, or legal, to catch the bad guy and prevent another mass tragedy. She graciously accepted the third Golden Globe of her career for Best Actress in a TV drama. In the Best Actor in a TV Drama category, a seasoned TV vet won for a new role and likely shocked the  viewing public and certainly most critics. Kelsey Grammar took home the gold for his role in Starz rookie drama series, “Boss,” as Tom Kane, the mayor of Chicago, who is concealing his recently diagnosed neurological disorder that could ruin his political career. After a masterpiece fourth season, Bryan Cranston would have been a superlative choice for his role as a family wrapped up in the evils of the meth trade in “Breaking Bad.” And after him both Steve Buscemi of “Boardwalk Empire,” and Damian Lewis (my personal choice) of “Homeland” both garnered countless praise in the past year for their captivating roles. I have not caught any of “Boss” yet, so Grammar may have been just as noteworthy. Nonetheless, in a year filled with mesmerizing performances, most prognosticators felt the other three mentioned were superior.

The Hollywood Foreign Press also deemed Matt LeBlanc of “Episodes”  and Laura Dern of “Enlightened.” two of the funniest performers of the past year by bestowing unto them the awards for Best Actor in a TV Series – Musical or Comedy and Best Actress in TV Series-Comedy respectively. Also, in a mildly turn of events, “Modern Family,” was finally honored with the Best TV Series – Musical or Comedy after being stiffed the past two years while winning the Emmy for Outstanding Comedy Series, both years, just seven months later. “Glee” had been the recipient those two previous years, but after what some would consider a creative slump for the series, it really shouldn’t be shocking that the clearly beloved ABC sitcom finally got its due from the Hollywood Foreign Press. PBS’ in-depth examination of class relations at the turn of the century had no trouble snagging the Best TV Mini-series or Motion Picture made for Television statuette.

For the cinephiles, it was a night of high regard for many prestige pictures, but the silent, black-and-white throwback “The Artist,” that shone the brightest among the flashing bulbs, winning 3 awards including Best Motion Picture – Comedy. The film’s score, arranged by Ludovic Bource, nabbed Best Original Score, and the charismatic Frenchman Jean Dujardin accepted the Best Actor in a Motion Picture – Comedy or Musical. Biting at their heels, however, was the Alexander Payne-directed family drama, “The Descendants,” which received 2 awards including Best Motion Picture – Drama. Its star, or rather superstar George Clooney continued to be adored by fans and critics by accepting Best Actor in a Motion Picture – Drama. Familiar female faces earned the remaining major acting awards, perpetual nominee Meryl Streep and starlet Michelle Williams were both lauded for their iconic roles. Streep secured her Best Actress in a Motion Picture – Drama award for her dead-on transformation into former British Prime Minister, Margaret Thatcher, in “The Iron Lady,” and Williams’ immersion in the role of sex symbol Marilyn Monroe had voters swooning and proclaiming her Best Actress in a Motion Picture – Musical or Comedy.

And I would be remiss to mention that the astounding, and always commanding Morgan Freeman was the recipient of the Cecil B. DeMille, Lifetime Achievement Award. Handed to him by former recipient, Sidney Poitier, Freeman was beaming as he basked in the glory of his many classic roles, while crediting every single one of his former castmates for blessing him with all the fun he has had of the course of his legendary career.

And Blast readers, don’t forget to voice your opinions in the comments section! Share with us your insights on who was robbed, who deserved their accolades, and what performances/shows/films were overlooked and absent on the ballot.