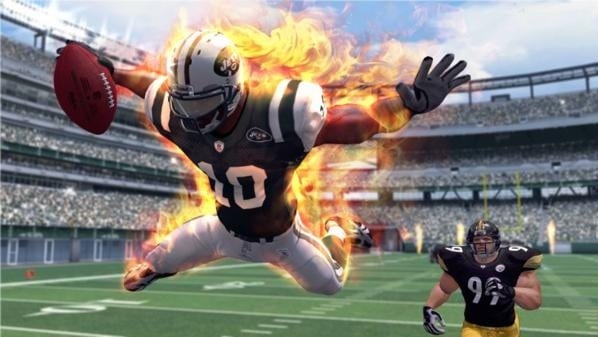 My dad loves football, but he finds football video games too complicated. I can’t really blame him either; I’ve tried to get him into Madden, but when you really break the 800 LB gorilla of a gaming franchise down, it’s tough to explain; even if it is second nature when playing. That’s exactly why NFL Blitz works so well — it’s America’s favorite game (Yeah, that’s right, I said it baseball) boiled down to its most basic elements.

Now, after years of being absent, the arcade style footballer returns; in all of its glory — well, sort of. It’s still just as frantic and fun as you remember, but it also comes during a turbulent time in the NFL, once that changes the very landscape and identity of what NFL Blitz is. Still, if you have even the slightest love for NFL Football, Blitz is a blast, especially played with friends.

If you’ve never played NFL Blitz, it’s basically a suped up version of Madden. The players are bigger and ripped with muscles and the plays more explosive. The game nixes strategy and philosophy for over-the-top action and adrenaline. In Blitz, there are no penalties, teams can catch on fire and it takes 30 yards for a first down rather than the standard ten yards.

The action in Blitz is fast, fun and in-your-face. It’s not uncommon to have score upwards of 30 points in the first quarter, and you’re bound to jump off your feet at least a few times. This is where Blitz excels, there’s never really a dull moment, and it gets even better when you’re playing against friends. This is the type of game that friendships are tested on, as it’s extremely fun to play against your friends in Blitz. Think throwing the game winning hail mary in Madden is fun? Imagine the thrill of doing it in Blitz, complete with players on fire and jumping clean over their opponents.

The most impressive aspect of Blitz is how much it retains the original arcade feel. Games are quick and easy for anyone to jump in and pick up and play. Perhaps more impressive, they’re also just as easy for anyone to win. It’s this accessibility that seems to be missing from most other current gen sports games. Blitz even features the old school Midway style codes to be entered at the versus screen for effects like different stadiums, characters and effects.

This isn’t however, the NFL Blitz of old, not completely anyways. The NFL is a much different league than we saw when the last entry in the series was released and that’s something that Blitz both falls victim to and benefits from at the same time. This season, the NFL has been tougher on late hits, and as a result, you won’t be able to stop your opponent’s touchdown celebration with a late, bone jarring hit. Sure, the hits in Blitz are ferocious enough, (come on, I delivered a piledriver to a Quarterback during a sack) but the late hits were a big part of the original games.

Aside from the Play Now option, you’re bound to get the majority of playtime from the game’s Blitz Gauntlet mode. Similar to modes found in games like NBA Jam and Mortal Kombat, you’ll face off with teams in a ladder format, with bosses mixed in. These bosses range from fictional characters (zombies) to team inspired creations (my Packers for instance had to face off with guys in overalls, Packer Jerseys and cheeseheads). These boss battles also feature powerups spread throughout the field, which makes them feel different than your standard games. There’s also a trading card game similar to that found in Madden, but I didn’t like it there and I don’t here either.

Tim Kitzrow from the original Blitz and NBA Jam games makes his return, and is just as entertaining as ever. Him and his announcing partner openly mock pop culture, including games, which includes Blitz. My favorite was when the two said that next year they’re going to audition for Madden because it pays more. Visually, NFL Blitz is on par with what you’d expect, though I was a bit disappointed at the lack of detail in some of the player’s faces. Sure, sometimes Aaron Rodgers looks like himself in the game, but others he just looks like another nameless, faceless NFL Quarterback.

The Blast Factor:NFL Blitz proves that arcade style sports gaming still has a place in modern gaming. It’s a blast to play, especially with other human players, and its accessibility makes it easy for just about anyone to jump in and play. . If you’ve got even the most slightest affinity for the sport or multiplayer gaming — you owe it to yourself to check out this modern day revival.