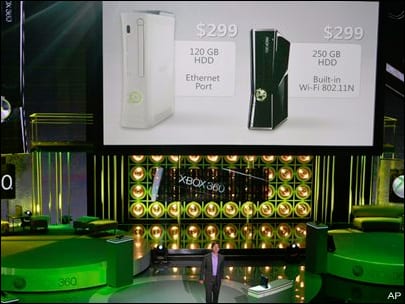 In the last 24 hours, the gaming internet has been on fire with talk of the PR Nightmare that caused Ocean Marketing’s Paul Christoforo to lose his job. The story is up on the main page, but the basics go like this; a customer emailed Christoforo regarding the status of an order, which led to some very snippy responses from the rep, including name dropping the Mayor of Boston, and the editors of IGN and Kotaku. Christoforo then name dropped online gaming comic Penny Arcade, which led to the site’s Mike Krahulik to respond by banning the company from PAX East. It may be sad that it had to come to this, but the whole situation reveals a lot about who we are as gamers, and how far we’ve come when compared to other industries like movies, TV and music.

Every year the gaming Industry converges on Los Angeles for E3, and every year it’s met with more excess and bigger budgets. Huge elaborate displays, no doubt well compensated models and over the top stunts (two years ago THQ turned an entire city block of downtown L.A. into a territory occupied by North Korea for Homefront — just think of all of the expenses and permits associated with clearing that with the LAPD). Then there’s the parties. I remember very specifically when I wrote for a different site, hanging out on top of a high rise just blocks from the convention center during a party for Atari’s Test Drive Unlimited 2. Let me paint you a picture, free booze, everything covered in white, dancers grinding on each other, thumping music and what I could only assume was food. Notice something missing? Oh yeah, video games. After looking around, I found that there was one big screen, running the game, which was totally available the entire time I was there tucked far into the corner.

Now, I don’t bring this up because I hate parties, or drinking or free stuff (they gave away noise canceling headphones and Atari towels), but that I went back to my hotel worrying that the industry I’ve loved since I was a kid was becoming what we always feared. We were becoming another one of those excess first industries where we don’t know anyone’s name, and worry more about the ahem….”glitz and glamour” of the business instead. Then, the next day all hope was restored when I was sitting in the PlayStation VIP demo booth checking out the newly announced PlayStation Move with Ted Price of Insomniac Games and Ken Levine of Irrational Games. It reminded me that we still haven’t gone completely to the darkside yet, and there’s still a ton of unity within even the industries bigger names.

This whole Ocean Marketing Situation is much the same. Think about it. Penny Arcade has become a major player in the gaming industry. Not only do they have their own comic strip, but they’ve also got their own game, convention and charity. They did not have to get involved in something like this. Imagine if this happened with the movie industry, and someone name dropped a famous director like Spielberg or Robert Redford, actor and founder of the Sundance Festival. Do you really think either of them would give a shit about somebody being an ass to a customer, let alone responding? Saying nothing about their character, it’s hard to believe they would, the movie industry has gotten almost too big, and it may seem cliche; but no one cares about the little guy anymore. Krahulik stepping up and not only defending the customer, but taking action and letting the res of the world know that this type of behavior is not going to be tolerated, and banning the guy from PAX is a prime example of just how in the face of so much excess, we’re still focusing on what’s important (but come on guys, those death threats you’re sending his way are making this entire column look bad.

Oh and hey, here’s a funny video someone did of the incident.