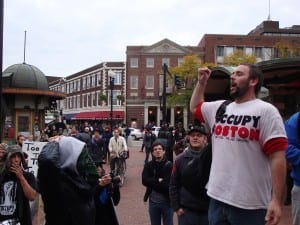 BLAST: Who are you?

BLAST: What do you do?

JM: Making sure the movement moves forward. Putting a foot to people’s asses when need be. Simple as that. I would rather be part of history than read about it.

JM: I’m involved with the Occupy movement because Americans like to believe and claim that America is number one. But any educated human knows that is false. The US fails in healthcare and education, which are are two most important things any developed nation needs to move forward. Hopefully this movement wakes Americans up and makes them realize the US is only 5% of the world’s population, not 99% of the population. With that, hopefully, more people will realize that the US dictates how other nations should run. The US truly does police the world; that needs to end.

JM: We move into a warehouse, or office, or open indoor space. In 2016, Occupy will occupy every local, state, and national branch of our government.