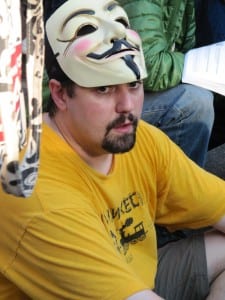 Guy Fawkes mask worn by Occupy Boston protestor the weekend of the October 11 raid in which Boston Police arrested 141 people and removed tents that had been erected in one of the Fort Point Channel Parks. (Blast Staff photo/John Stephen Dwyer)

A document faxed from One Bullfinch Place to the Twitter offices in San Francisco Friday details a subpoena “Pursuant to an official criminal investigation being conducted by the Suffolk County District Attorney’s and the Boston Police Department” filed by the DA’s office Special Prosecutions Unit. Dated December 14, the subpoena is signed by Benjamin Goldberger, Assistant District Attorney of Suffolk County (the county of Massachusetts that corresponds to the city of Boston).

The subpoena requests “available subscriber information, for the account or accounts associated with the following information, including IP address logs for account creation” but, inexplicably, includes not only account names, but also hashtags and a term which is neither account name nor hashtag. The “accounts” which Goldberger has subpoenaed about are Guido Fawkes, @p0isAn0n, @OccupyBoston, #BostonPD and #d0xcak3. “Guido Fawkes” appears to be a reference to Guy Fawkes, the stylized mask of whom has come to be associated with the hacker group “Anonymous.” That same group might be referenced in the “@p0isAn0n” user name. “#d0xcak3” seems to be a reference to “doxing” i.e. releasing personal information about people over the Internet.

Doxing, per se, is generally legal although the information presented is sometimes obtained via illegal means, such as hacking. In October, along with data from the International Association of Chief of Police website, Anonymous revealed 1000 names and passwords from the Boston Police Patrolmen’s Association. A press release attributed to Anonymous explained, “We have no problem targeting police and releasing their information even if it puts them at risk because we want them to experience just a taste of the brutality and misery they serve us on an everyday basis.”