Brad Bird wants to help you love the movies again.

And I don’t mean film in the academic sense. I mean movies. Big, loud, fun, slightly insane movies. Movies with explosions and fast cars and fabulous locales and women in tight dresses. Not to put too fine a point on it, movies with balls.

And Bird has decided to take his stand for the good, old-fashioned action flick, and make his live-action film debut, using a tired, 15-year-old franchise starring a manic Scientologist entering middle age. Frankly it sounds like the perfect recipe for disaster. And it very well could have been, in another director’s hands. But Bird uses deft sense of storytelling, a visionary skill with the IMAX camera, and a healthy dose of humor elevate what could have been a flop to the best action film of the year.

Part of “Ghost Protocol’s” merit lies with Josh Appelbaum and Andre Nemec’s script- the plot is tight, complicated enough to keep your interest, but simple enough to keep you from getting tied up in knots. Instead of the overwrought cat-and-masked mouse game of earlier films,the problem is simple: a terrorist named Hendricks (Michael Nyqvist) has stolen nuclear launch codes, blown up the Kremlin and blamed it on spy agency IMF. The entire agency has been disavowed, including the legendary Ethan Hunt (Tom Cruise), who puts together a team to steal back the codes.

That’s it. No weird kidnapping scenarios, no Jon Voight. Without over-complicating the plot, Bird leave enough room to let the movie breathe and create truly stunning action set-pieces. The best take place in Dubai- Bird uses the surreal landscape of an adult playground in the middle of the desert to great effect. A scene where Cruise has to scale the Burj Khalifa, the tallest building in the world, is possibly the most thrilling, terrifying sequence I’ve seen this year- and a later chase scene through a dust storm isn’t far behind. 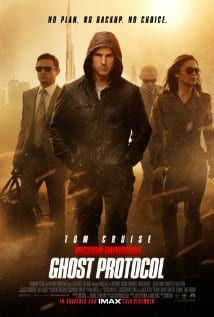 Say what you want about Tom Cruise (and there’s plenty to say), but he knows how to command a scene. Ethan Hunt isn’t exactly riveting by himself. Like Jason Bourne, and James Bond before them, the expert spy is only as interesting as the people and places around him. Cruise understands that limitation and knows how to work with it. Whatever he is in his personal life, in his career he’s nothing less than a consummate professional. He’s backed up by Paula Patton, making the most of the token hottie agent role, Simon Pegg, reprising his role as the comic relief techie, and of course Jeremy Renner, whose expressive eyes and fancy krav maga moves are worth the price of admission all by themselves. Renner is the only one who is capable of taking the spotlight from Cruise, with a slow-burn energy that will treat him well as he continues his ascent to stardom.

It’s not all gold. There’s a silly portion involving Renner’s character’s past, and a bizarrely out-of-place end scene that should have been cut out completely. There’s also the usual continuity/believability issues, but really why should we care how Ethan and his team get from Russia to Dubai when their entire agency has been shut down? Ignoring those little problems are part of the fun. Logistics are for suckers.

So bring on the explosions and the car chases and Paula Patton in a cut-out dress! Brad Bird is here and he wants to make goddamn movie. Give yourself a present this Christmas, and see it on the biggest screen you can find.