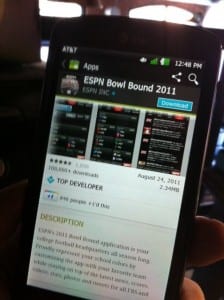 If the shockingly large screen and 4G speed on the LG Nitro HD isn’t enough for you, we’ll delve into the greedy, dirty little details a little bit.

When, you get up close, the Nitro HD’s 4.5″ screen might as well be a 50″ plasma in your den. Combined with 4G speed, it turns the phone into a portable man cave that you can use to actually fulfill those fantasies of watching a football game during a wedding or making a last minute fantasy team switch during church that you see on all those commercials.

The 4G LTE is amazing. It’s still relatively new around here in Boston, so we’re still getting used to not having to troll around for Wifi hotspots to download vides and apps. YouTube videos stream just as fast as they would on WiFi. That makes watching game highlights and an occasional catch-up episode easy on the train or during downtime at work.

It is amazing how far the cell phone has come in the past few years, and this is a prime example. The display is in 1280 x 720 resolution, at 329 pixels per inch, with real RGB pixels, giving you the best possible display on a cell phone.

And the phone zooms Android 2.3 with a 1.5 GHz dual-core processor.

The display is truly impressive. There’s a lot of real estate, and it’s incredibly crisp when playing videos. I checked out some highlights from my Steelers absolute laydown against the 49ers on Monday night, and I loved how detailed everything looked on the phone’s screen. Everything sounded clean and clear as well.

The ESPN ScoreCenter app also looks amazing on the larger screen of the Nitro, letting you check on all your teams, but what’s even more amazing is the ESPN Bowl Bound 2011 app that gives you highlights and analysis of the coming college bowl season. If you’re not a huge college football fan, all you have to do is play with this app for five minutes, and you’ll be hooked.

What makes it easier is that, on the 4G LTE network, the videos and data stream as fast as they would if you were sitting at your office computer. The only difference is that you can check everything on your mobile man cave of a phone instead of “company time” on your work computer.

Having high-def video content over 4G LTE makes a world of difference. You really notice the improvement over the grainy “mobile video” content of yesterday. It’s like having HDTV at your fingertips.

If you’re a Google user, the phone will be more comfortable right away, because the Nitro HD comes preloaded with the major Google apps like Maps, Mail, and Calendar. There is also an office-esque app, visual voicemail, and YouTube and Twitter onboard.

The whole package also makes it easier on the battery. The display is energy-efficient, and the battery gives you up to seven hours of talk time, so you can also use your man cave as a phone.

LG provided a sample phone for the purposes of this article, and the author was paid or otherwise directly compensated to promote the product in the article.